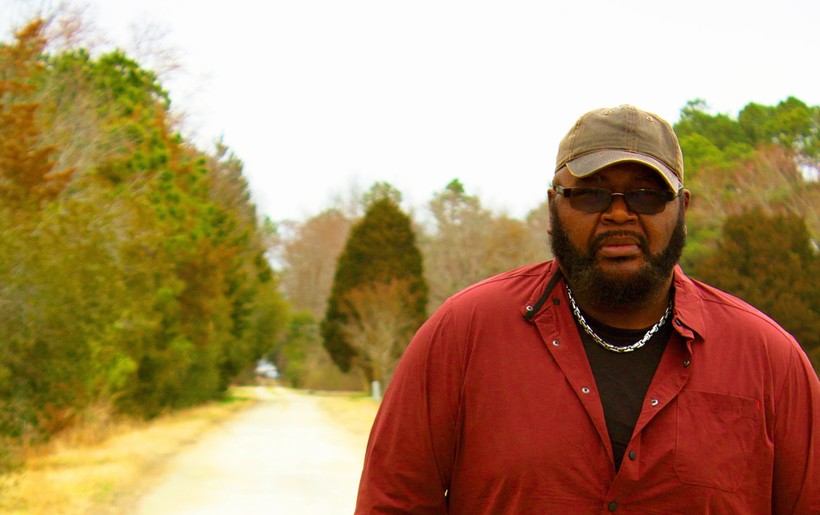 Novelist Shawn Cosby knows how to tell a story. And while tales of crime and punishment are his specialty, how he has emerged as an important voice in contemporary American literature has a plot just as enthralling.

Cosby's latest crime novel, "Razorblade Tears," is a carefully-crafted, fast-paced story of revenge and redemption set in the American South. It's the story of a Black father named Ike Randolph and a white father named Buddy Lee Jenkins. They're ex-cons grieving the losses of their gay sons who were married to each other. After their sons are brutally murdered, Randolph and Jenkins reluctantly team up to solve the crime.

Cosby seems to specialize in stories populated by overlooked characters like the ones in "Razorblade Tears," but his work hasn't gone unnoticed. He has drawn plaudits in the literary world and fielded inquiries from Hollywood bigshots. Walter Mosley, renowned as one of America's greatest crime fiction writers, said, "S.A. Cosby reinvents the American crime novel."

Does Cosby agree with that assessment?

"No, not at all," he told WPR's "BETA." "And I'm incredibly humbled and moved by Walter saying that. In my estimation, he reinvented the great American crime novel when he created (his character, private investigator) Easy Rawlins."

But is it possible that Cosby re-reinvented the American crime novel?

"I think there's a very small part of me, that is egotistical, that would love to take credit for that," he said.

Cosby said he has written and continues to write "about people that are in some ways invisible in the modern light — the rural Black community."

"And so if anything, I kind of try to shine a light on that. But as far as reinventing the great American crime novel, I am far too much of a Southern Baptist to take that title," he said.

Despite his modesty, Cosby has definitely taken a different path with his novels in terms of writing about everyday men who are often ex-cons. His characters often have flaws and some of them are trying to redeem themselves.

On talking about the South

Another big difference between Cosby's crime novels and others is that his are set in the South.

"I think there is this idea, especially among literary circles, that the South is the sole providence of neo-Confederate apologists and nothing could be further from the truth," he said. "You know, I like to say that every scrap of land that a good, old boy waving a Confederate flag walks upon, somebody who looks like me bled, died and fought for that land. And so they don't get to define what the South is with the new South or the old South."

Cosby said he thinks there aren't a lot of Black writers tackling this because talking about the South, either in the past of the present, is difficult.

"It's hard. It hurts. It's painful," he said. "You know, I live in a small town where (within) about 100 feet from the courthouse, the building that you go to achieve a redress of grievances, there's a huge statue dedicated to Confederate soldiers. You know and I know what kind of message that's trying to send."

Cosby said he is committed to doing the work.

"I think I'm hardheaded enough that I feel like there are stories and there are tales that need to be told here that I think can only be told here. And so that's what I try to do with my work," he said.

The novel's two protagonists, Randolph and Jenkins, are men who with a horrible past. They're ex-cons who have made mistakes in their lives. Despite the characters' similarities, they are very different.

"Ike is an African American man who has achieved a sliver of the American middle-class dream," Cosby explained. "He owns his own business. He owns his own home, which is very important. I don't think people realize how important it is to own your own house, and he's trying to live the straight and narrow life."

On the other hand, Jenkins is a white Southerner and a functioning alcoholic.

"He's someone who is struggling despite the fact that he has certain privileges that Ike doesn't," Cosby said. "And I think for Buddy Lee, it's hard for him to sometimes discern that privilege does not mean success. Those are two different things you can have. Privileges still be unsuccessful. And so what brings them together, unfortunately, is the death of their respective sons who were married to each other."

Cosby said the events depicted in the book prove pivotal in bringing these characters together.

"And so these two sons are killed at the beginning of the book, and both Ike and Buddy Lee were not accepting of their son's identity and who they were as gay men," he said.

In an effort to seek justice for their sons, "these two men of violence resort to what they know best: to get revenge for their sons," Cosby said. "But also, I think, achieve a bit of redemption for the way they treated those boys and in trying to do better by them in death than they did in life."

Both Randolph and Jenkins are multidimensional characters. How was Cosby able to create such complicated characters?

"I grew up around men who are in some ways trapped by an antiquated idea of masculinity and what it means to be a man and what it means to be quote-unquote tough and whatever that looks like," Cosby said. "And I think these men that I grew up around who aren't bad men, if you ask them, you know, they aren't men that would kick a dog or be cruel to a baby. But they're also men that are very narrow-minded in their ideals and their beliefs."

He said these characters allowed him to examine observations he made of Southern life.

"I think for me, growing up, I had to learn to respect those men for what they brought to my life as a young boy, but also learn to disseminate a different type of viewpoint. Because what I learned is that, you know, my personal definition of masculinity does not have to correlate with yours or anybody else's, and someone else's definition of masculinity doesn't diminish mine."

Cosby said many books have explored some of these themes, but stories in the South have a unique blend of factors that underpin Southern culture.

"I feel like Southern fiction has a very specific distinction," he said. "This foundation is the holy trinity of race, sex and class. And you could throw religion in that class definition because religion definitely is a part of that class discussion. But those are the things that define the South in a different way than any other region in America. There is class struggle in the Northeast as class struggle in the Midwest, but I don't believe there is that super close proximity to the blood and the horror of 400 years of slavery that exist in the South."

For Cosby, those facets have informed his worldview.

"I went to elementary school at a school that was named after Robert E. Lee and 'Stonewall' Jackson. And so there is this sense in the South that these ghosts that haunt us," he said. "We've got to confront them daily, whether we want to or not."

On addressing sex, class and race in the South

So how did Cosby go about weaving this holy trinity of race, class and sex into "Razorblade Tears"?

Cosby wanted to show characters like Jenkins and Randolph at different levels on the social hierarchy.

Cosby said he also wanted to explore sex in the book.

On getting Hollywood's attention

Such is the power of Cosby's work that it has attracted attention from Hollywood.

Producer Jerry Bruckheimer and his production team have acquired the film rights to "Razorblade Tears."

"I think that was probably the most surreal moment in my writing career," Cosby said. "I am this country fellow from a small Southern town, a college dropout. And I was on a Zoom meeting talking to Jerry Bruckheimer as he sat in front of his in a reflexive concave window that overlooks Malibu and looking so tanned, fresh and the epitome of Southern California. And here I am in my little office that looks like I just moved in."

Despite the good fortune, Cosby isn't resting on his laurels. He's currently working on a new novel, tentatively titled "All the Sinners Bleed." It takes place in a small Southern town and the protagonist is the town's first Black sheriff. On the one-year anniversary of his election, there is a school shooting, and it leads the sheriff to discover that there is a trio of serial killers who have been using his town as a dumping ground. Two of the killers are done away with during the school shooting. However, one is still out there, and he's angry that his partners have been taken from him.

"And so, this sheriff has to solve this mystery while also dealing with a far-right contingent in his town who wants to hold a parade to celebrate the Confederate statue," Cosby explains. "He's also dealing with some secrets from his own past, his former time as an FBI agent."

This new story, like Cosby's past works, continues to explore Southern life, people and culture.

"So there's a lot of talk about race, class and sex and religion and all the things that make Southern fiction great. You know, my usual lighthearted fare," he said with a laugh.