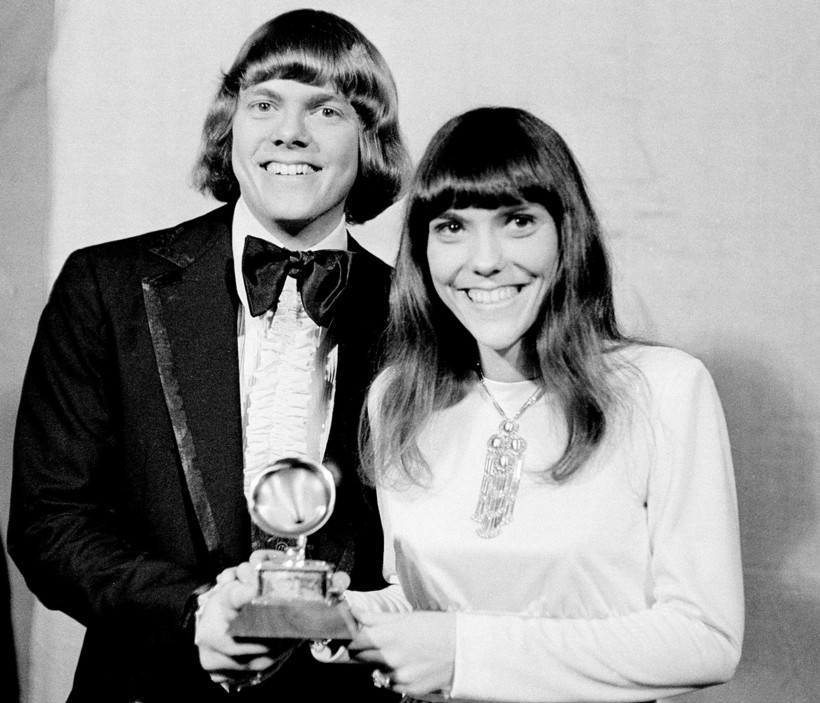 The Carpenters, Richard and Karen, pose with their Grammy during the 13th annual 1970 Grammy Awards in Los Angeles, Ca., March 17, 1971. "We've Only Just Begun," is still a favorite among many newly-weds. AP Photo

Author Explains Why Karen Carpenter Still Matters After All These Years

Karen Tongson grew up in a musical home; both her parents were professional musicians in the Philippines, a country where The Carpenters were arguably more popular than in their native United States. The Carpenters were such a big part of her life that she wrote "Why Karen Carpenter Matters," a book that is part biography and part memoir.

Tongson told WPR’s "BETA" about her introduction to the music of Karen and Richard Carpenter.

"My parents were listening to the music, and I was born in 1973 at the height of The Carpenters' fame, really when they were breaking out, making gold records, platinum singles, etc.," Tongson said. "So I feel like I never knew a time that The Carpenters were not a part of my sonic landscape."

It’s no coincidence that Tongson's first name is Karen.

"My mom named me after Karen, in part because her own voice was often compared to Karen Carpenter's because she, too, had a low alto voice," Tongson explained. "And so in some strange way, it was almost like naming me after her but mediated through this famous figure. So it wasn't quite a direct link just to her name, but to something that said something about my mom."

Since The Carpenters’ music was so ubiquitous on Filipino radio and on television, Tongson assumed that their music would be just as enduring in the Southern California soundscapes of the 1980s. But Tongson discovered that was not the case when she immigrated to the U.S. in the early 1980s.

"When I realized I was wrong, part of what happened is I realized how profoundly The Carpenters to me sounded like the Philippines and not the United States. How it reminded me of home, of my family, of my earliest days, hearing everyone sing their music," she said. "So it was a connection to that past in the Philippines and less so, a kind of gateway to the America that The Carpenters always sang about."

The Carpenters' first hit, a song called "Goodbye to Love," was written by Richard Carpenter and his lyricist John Bettis and released in 1972. Tongson said it’s one of the duo’s most innovative and original songs.

"Listening to it many decades after something called the 'power ballad' has basically become a standard sound in popular music, it doesn't sound that remarkable. But if you think back to 1972 and think back to the sound The Carpenters were associated with, which was a certain kind of mainstream balladry, middle-of-the-road balladry, and part of what made it so innovative was that it was really one of the first hit singles to include a sawtooth guitar solo (fuzz solo performed by lead guitarist Tony Peluso), basically shredding up the middle of a song that's otherwise quite placid and gentle."

"For those of us who listen to Heart and Journey and everybody else, basically from the 80s, we're trained to hear that as something that's always existed. But that's one of the first songs, if not the first song, to create that contrast and to provide that power ballad sound we all love," Tongson said.

Tongson said that so much of The Carpenters' music is about singing along and singing together.

"The Philippines has a really deep and profound public singing culture. They just became standards because they were songs we could sing along to. Karen's alto voice wasn't too high. And even those of us who didn't have good voices could manage to match pitch and share the sentiment," Tongson said.

"I think that Karen Carpenter just stood out as somebody who didn't quite fit in," Tongson said. "And I think that a lot of her music sang of unrequited love. A lot of her music focused on not being sure there would be anybody there to love you. And I think that that's the kind of sentiment and feeling that a lot of young LGBT people have, that as a person who has all this love to give and the capacity to love, there is a fear that you'll never find and anyone, at least back then."

"I think that it might be different now, but that you might never find anyone who would love you back," she continued. "I think that she gave voice to that in many respects, a torch song singer and that torchiness. And it's kind of long association with LGBT cultures is one of the reasons I find Karen Carpenter has such resonance in LGBT communities."

Tongson said she believes Karen Carpenter carved out a place in the music world for female vocalists and that you can see her legacy in some of the women singers who came after her.

"We can see that they're also misfits in their own way. I'm thinking of people who've spoken openly about emulating Karen Carpenter, like k.d. lang. And so I do think that (Carpenter) has a much broader, richer afterlife. I think that in her time, she is very much kind of perceived to exist within a very hermetically-sealed world and environment and a kind of wholesome one," she said. "And I think that since she passed and since people learn more about her suffering in various ways that we come to understand she had a much more complex, a richer, sadder and sometimes also different life than we anticipated."