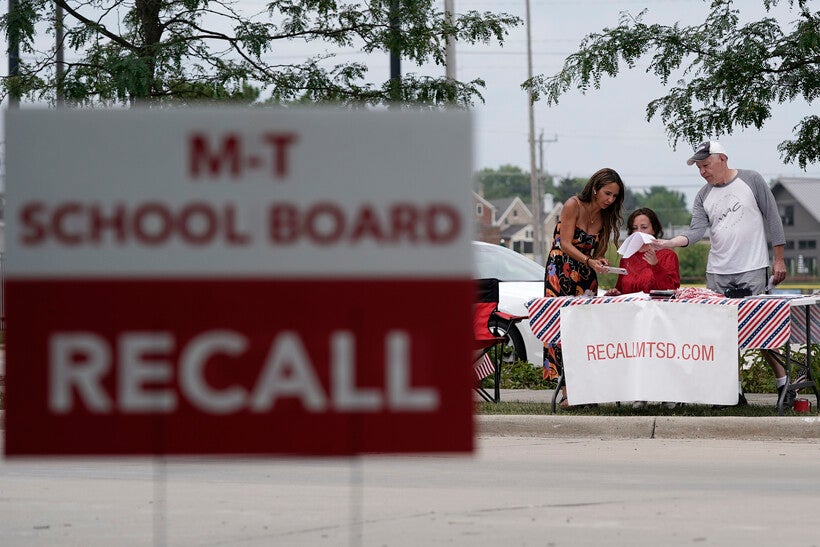 Volunteers collect signatures to recall the entire Mequon-Thiensville School District School Board outside the Mequon Library Monday, Aug. 23, 2021, in Mequon, Wis. A loose network of conservative groups with ties to major Republican donors and party-aligned think tanks is quietly lending firepower to local activists engaged in the culture war fights in schools across the country. Morry Gash/AP Photo

Wisconsin had 11 school board recall attempts this year although only MTSD had signatures to go to ballot
By Madeline Fox
Updated:
Thursday, November 4, 2021, 1:40pm
Share:

An effort to recall four of the Mequon-Thiensville School District's board members failed Tuesday evening, with all four retaining their seats by a roughly 58-42 margin.

"Generally speaking in politics, if there's a result that's nearing 60 percent, that's considered decisive, almost a landslide," said Mordecai Lee, a professor emeritus of urban planning at the University of Wisconsin-Milwaukee. "Here we have these highly contested four seats, and all the incumbents were retained by about 58 percent of the vote, that's decisive."

Lee noted that generally in politics, people unhappy with the current system are much more likely to vote, which in this case would be the people unhappy enough with current board members to mount a recall — which he said made the defeat even more striking.

Amber Schroeder, a parent in the district who handles public relations and media for Recall MTSD, said she thinks the fact that it was a recall, not a traditional election, might have made the "yes" vote a harder sell.

"I think a lot of people that would typically vote in favor of our candidates didn't turn out to vote because of the fact that it was a recall election," she said. "I would guess at the turnout of people that would in all likelihood vote for our candidates being a higher turnout at a spring election, versus this recall election, just because in general conservative voters, which is the demographic that we are obviously trying to capture, they just don't like recalls."

Despite the defeat, Schroeder said Recall MTSD, which has launched a new website and platform called RestoreMTSD, will continue their campaign as Wisconsin gears up for regular school board elections this spring.

"It's clear that a big percentage of people in Mequon are ready for the change," she said. "There's a portion of community members that have drawn a line in the sand, and they haven't gotten to that line yet, and those people haven't been affected enough to effect change — we just haven't hit everybody yet, we haven't uncovered and triggered enough people yet, and crossed their tipping point."

Paul Buzzell, a former MTSD school board member who helped set up the website Inform Mequon-Thiensville to counter the recall effort, said he's also thinking about what the recall defeat means for future efforts in other districts, including the coming elections.

"We're relational, I was on the school board, I have 700 people that voted for me that I have on alert," he said. "If you can't get the parents and the people who care out, you can't do it — you can't be better than the messaging from all the outside groups."

Wisconsin has seen recall efforts in 16 school districts over the past two years. Some prompted the targeted board members to resign, but only Mequon-Thiensville garnered enough signatures to make it onto the ballot so far. Two other efforts are still underway — an effort to recall Sparta board member Nancy Sikorski has another two weeks, and the petition to recall two Manitowoc board members has a Dec. 3 deadline to gather signatures.

Proponents of the Mequon-Thiensville recall said a decline in the district's academics was driving the recall of board members Wendy Francour, Erik Hollander, Akram Khan and Chris Schultz, though the district has consistently scored above 85 percent on its annual report card from the state Department of Public Instruction, placing it in the highest category of "significantly exceeds expectations."

However, the challengers running to replace the sitting board members and literature supporting the recall also cited COVID-19 precautions put into place last year and this year, along with concerns about how schools incorporate race in classroom teachings.

Those issues have also become rallying cries in other recall efforts in Wisconsin and around the country, and are major components of right-wing organizations' messaging around school boards. The conservative political advocacy organization Heritage Action, for example, warns of "poisonous leftist teachings, including critical race theory and transgender ideology." American Majority, a conservative organization with an office in Wisconsin, has cited critical race theory as a concern in its blog post about the Mequon-Thiensville recall, and its playbook for conservatives who want to flip local school boards references efforts in two Wisconsin districts.

Critical race theory, a conceptual theory to help explain how inequality gets reproduced and maintained in our society, is used mostly in law school and is typically taught at the graduate level, not in grade schools. Over the past several years, though, some have used the term to describe everything from diversity, equity and inclusion efforts to a focus on students' social and emotional well-being.

Around the country, school board races that brought up similar issues also showed that conservative rallying cries around COVID-19 and how race is taught have proved persuasive, with new board members winning seats in Texas, Colorado and Iowa. They'll likely come up again in Wisconsin during school board elections in April, and COVID-19 precautions in particular played a role in elections last spring, when opponents of the Wausau School District's COVID-19 precautions successfully challenged incumbent board members last spring and rolled back all those precautions for this school year.

School board positions in Wisconsin are traditionally nonpartisan. However, just like the state Supreme Court, that doesn't stop the races themselves from becoming heavily politicized, or parties and politically-affiliated groups from donating to candidates, as likely GOP gubernatorial candidate Rebecca Kleefisch's PAC did in Mequon-Thiensville and other races.

"This is not a one-off," said Lee, the UW-Milwaukee professor. "I think the signal from Mequon is that school board races are becoming partisan, that the idea of having something being nonpartisan in today's Wisconsin has really imploded."

Still, he said the results in Mequon-Thiensville point to a discomfort with the politicization of school boards.

"Here we've got a suburb in Ozaukee county that traditionally voted Republican, and suddenly they're not interested in the culture-war issues of the Republican Party," he said. "I think we should make a generalization that Wisconsin voters are more moderate and don't want school boards to be as partisan as we would expect in partisan elections."

Buzzell, the former school board member who opposed the recall, said he thinks that was why the recall effort failed.

"It failed because schools are not political," he said. "We're conservative 60-40 (in the area), and guaranteed, if we would have played in and taken support from the Democratic Party, the Republicans would have said, 'I'm not going for that.' So I would say, avoid every temptation to make it political, because you're going to turn off the people who otherwise could support the schools."

Schroeder, who worked to pass the recall, said it's impossible to keep politics out of the races, or out of the schools themselves. Her group's objection to the current school leadership revolves around how race is taught, which she said is political, for example. Still, she said, she recognizes that voters do want to see an effort to center on kids, rather than politics, at the board level.

"(Current school board member) Wendy Francour was quoted as saying she herself identifies as a conservative but being able to check her political opinions at the door when she attends school board meetings, and I don't see why that wouldn't be the same for everyone on our side," she said.