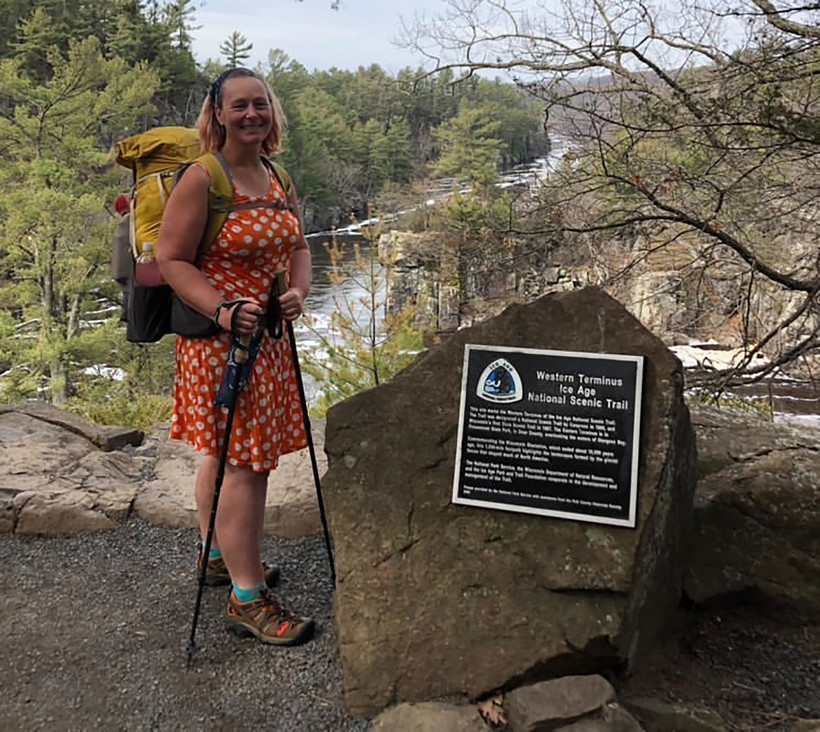 Arlette Laan stands at the Ice Age Trail's western terminus. Once she reaches the trail's eastern terminus, she'll be the first woman to hike all 11 national scenic trails. Photo courtesy of Arlette Laan

In about a week, a Massachusetts woman is expected to reach the eastern end of Wisconsin's Ice Age Trail, becoming the first female hiker to finish all 11 national scenic trails in the United States.

Arlette Laan, whose trail name is "Apple Pie," had about 200 miles left of the 1,200-mile-long trail as of last week. Once she reaches the trail's eastern terminus in Sturgeon Bay, she'll make history.

Laan's said "a lot of stubbornness" has helped her complete this journey, which began in 2003 when she hiked the Pacific Crest Trail.

"You start it, so you want to finish it," Laan said. "It's kind of like, how badly do you want it? How badly do you hate it? There were times where I was miserable, but you're like, 'Well, it should get better again at some point.'"

Throughout the early 2000s, she did eight of the national scenic trails, often hiking them with her husband Rich Gambale. She hadn't planned on doing the last three trails until she met M.J. "Sunny" Eberhart, who goes by the trail name "Nimblewill Nomad."

He's the oldest hiker to complete the Appalachian Trail and has done all 11 national scenic trails. He encouraged Laan to be the first woman to do it.

"You've done so many already. Why don't you do them all?" Laan said he told her. "He planted the seed, and I was like, 'I guess I could do that.'"

While traveling on the Ice Age Trail, Laan has been surrounded by open wildflower fields, singing birds and occasional patches of mosquitoes. She said seeing Devil’s Lake and having her husband and friends join her for sections of the trail have been some of the route's highlights.

Recently, Laan has met hikers who invite her to stay at their houses nearby, so she doesn’t have to camp. Sometimes the hosts drive her through local towns, which Laan said she enjoys because it allows her to see more of the state.

The West Coast national scenic trails remain Laan’s favorites, though, because of the mountains and graded trails

"You can actually kind of just walk and enjoy the scenery and not struggle so much," Laan said, laughing. "You have a lot more wildlife, especially like the Continental Divide Trail. We saw herds of elk, and it was just so cool." 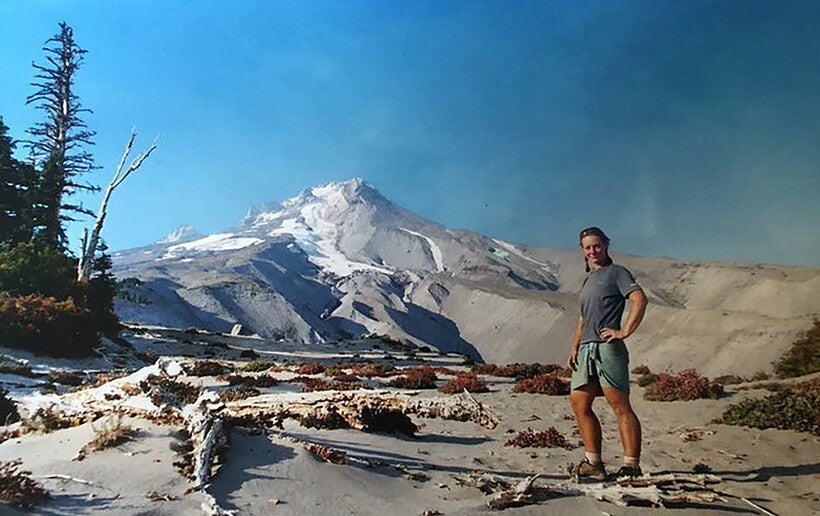 Arlette Laan poses on the Pacific Crest Trail in 2003. This was the first national scenic trail she completed. Photo courtesy of Arlette Laan

Smartphones and GPS technology were nonexistent when Laan did the Continental Divide Trail, so using paper maps and making mistakes made it feel like "a big adventure."

Laan is also proof of thru-hiking’s increasing popularity, which consists of doing a long-distance trail from beginning to end.

Melissa Pierick, the director of marketing and community relations for the Ice Age Trail Alliance, said 15 people have already attempted to thru-hike the Ice Age Trail this year. Seven of those individuals are on the trail right now, including Laan.

"I think social media has had a lot to do with this thru-hiking occupation that has arisen," Pierick said. "The Ice Age Trail Alliance headquarters sit directly on the trail, so we are fortunate enough to have the thru-hikers come through."

Driscoll first discovered Laan in a Facebook group for North Country Trail hikers. She found it interesting that Laan was hiking through lots of snow in pretty remote areas by herself. Driscoll continued to follow Laan’s journey when she announced she’d be ending with the Ice Age Trail. The two eventually met in person, although it wasn’t planned.

"I was out hiking up in Taylor County," Driscoll said. "I just stumbled upon her essentially. I knew she was in the area, and I completely forgot about it actually. And then when I was hiking, I was like 'Oh my gosh, that’s Arlette.'"

When Laan finishes the Ice Age Trail on July 11, she said she’ll return to Massachusetts and her job as a hiking guide in New Hampshire’s White Mountains. She said she is likely to do some shorter hikes, but said eventually she wants to do the Arizona Trail again. She also may set her sights on trails in Europe.

Her advice for other thru-hikers is to start with a comfortable mileage goal and only increase the distance once you feel more confident. If you feel like you want to quit, Laan said, it’s best to take one or two days off and then reassess. Laan likes to say "prevent injury and keep having fun."

As for why her trail name is "Apple Pie," Laan said it reminds her of Dutch apple pie and Holland, where she is originally from.

"I like treating myself," Laan said. "The little motto is: Don't let life or the dessert tray pass you by."