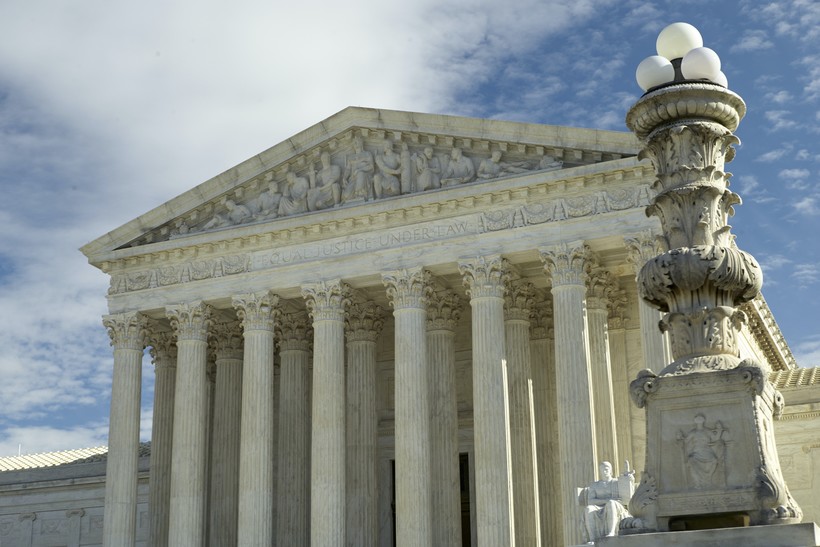 In this Jan. 27, 2020 photo, the Supreme Court is seen in Washington, DC. Mark Tenally/AP Photo

Candidates are scheduled to circulate nominating petitions for the new districts in April
By Shawn Johnson
Share:

The joint appeal filed Monday by the Legislature and the conservative Wisconsin Institute for Law and Liberty asks the U.S. Supreme Court to replace the plan Evers drew with one he vetoed — the map Republican lawmakers passed last year.

The move comes as a key deadline approaches for the 2022 election. On April 15, candidates for state office are scheduled to begin circulating nomination papers to get on the ballot.

At issue in the case is how the map drawn by Evers and approved by the Wisconsin Supreme Court drew seven majority-Black districts in Milwaukee. Under current law, there are only six.

Writing for the court’s majority in the 4-3 decision, conservative swing Justice Brian Hagedorn ruled there were good reasons to believe a seventh majority-Black district was needed to satisfy the federal Voting Rights Act.

The petition by the Legislature and WILL argues the map Evers drew violates the U.S. Constitution’s Equal Protection Clause because it drew the seven districts based solely on race without proving a need under the law.

"Absent this Court’s intervention, Wisconsin’s forthcoming senate and assembly primary elections will be run on racially gerrymandered district lines that could not possibly survive this Court’s Equal Protection Clause scrutiny," reads the petition. "Wisconsinites will soon suffer irreparable injury once they are re-sorted into the Wisconsin Supreme Court’s redrawn, racially gerrymandered plan."

The petition asks the U.S. Supreme Court to block the Wisconsin Supreme Court’s ruling, either temporarily or permanently. In its place, Republicans argued, the court should enact the redistricting plan drawn by the Legislature in 2021.

University of Wisconsin-Madison law professor and redistricting expert Rob Yablon said while it’s not especially likely, he "would not be surprised at all" if the U.S. Supreme Court decides to hear the Legislature’s appeal in some form.

"This is an area of law that is in flux right now," Yablon said. "The approach that the Wisconsin Supreme Court majority took is essentially in line with the way that these claims have been handled for the last few decades, but the U.S. Supreme Court has signaled interest recently in revisiting some of that case law."

Yablon pointed to the U.S. Supreme Court’s recent decision in an Alabama redistricting lawsuit based on the Voting Rights Act where a majority of justices ruled in favor of a congressional map drawn by Republicans. Oral arguments in that case aren’t expected until the fall.

Yablon said if the U.S. Supreme Court gets involved in Wisconsin’s case, it could potentially leave Evers’ map in place for the 2022 election while the appeal proceeds.

Whatever map is chosen is likely to preserve Republican majorities in the Legislature for the next decade. That’s because the Wisconsin Supreme Court ordered parties to submit maps that made the “least changes” to the maps that were passed and signed into law by Republicans in 2011.

Still, the difference between Evers’ plan and the map drawn by the Legislature could be significant because the GOP map could open the door to a veto-proof Republican supermajority in Wisconsin.