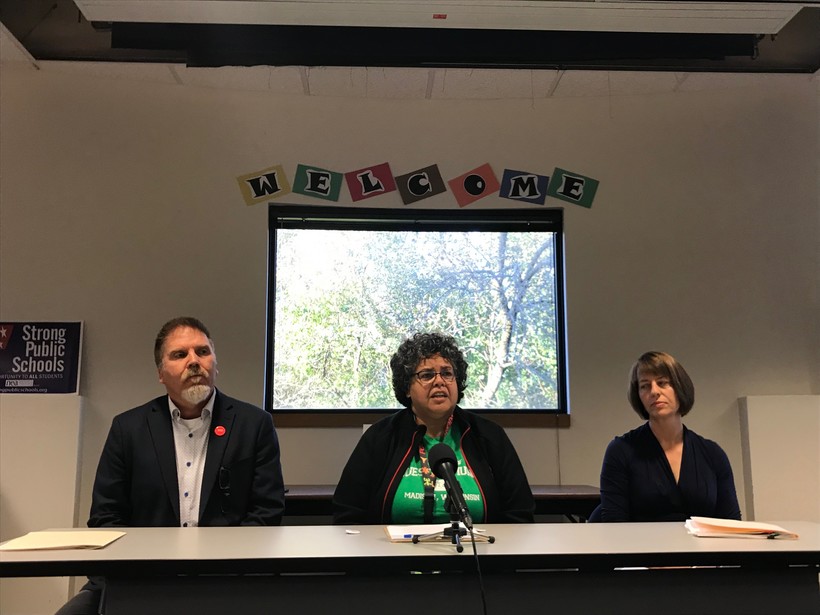 Sandra Rivera, center, talks to the press and community members about her punishment under the Madison Metropolitan School District's zero-tolerance policy for racial slurs at a press conference on Oct. 25, 2019. Miranda Suarez/WPR

School Social Worker Says She Repeated A Slur During A Conversation About Preventing Their Use In School
By Miranda Suarez
Share:

Another staff member disciplined under the Madison Metropolitan School District's zero-tolerance policy for racial slurs has come forward as she appeals her punishment.

Sandra Rivera, a social worker at Nuestro Mundo Community School, said that during a conversation with staff about how to handle situations where students use racial slurs, she quoted a student who used the N-word.

"Another member of the team was surprised to hear that our students did that and I shared a recent example that I had witnessed," said Rivera. "In wanting to be clear, I quoted the student and said the N-word, out loud and in its entirety."

The incident occurred in March. While she didn't lose wages or time in school, Rivera got a disciplinary suspension on her record, which is the harshest punishment besides firing.

She now hopes to change the policy and get the discipline off her record. Rivera said she wished she had a chance to sit down with her colleagues and apologize for her mistake instead of being punished.

"One of the things that I've realized in this process is that I have learned a really hard lesson in a really punitive way," she said.

As a black Puerto Rican, Rivera said, she would never use that word against someone.

"I know the history, pain, oppression, harm and trauma that that word carries because it is my history, too," she said, fighting back tears.

Rivera spoke at a press conference organized by Madison Teachers Inc., the local teachers' union. She is one of two staff members that MTI  is representing during their appeals for discipline under the zero-tolerance policy.

The union also represented Marlon Anderson, the Madison West High School security guard who was fired earlier this month for repeating the N-word while asking a student not to call him the slur. Anderson was rehired after local and national news outlets picked up the story and a protest in his support drew about 1,500 people.

Rivera said she decided to go public with her story after hearing about Anderson's firing.

"I felt like my silence has kind of contributed to this way of responding to situations like this. It has contributed to the damage that it continues to do, this zero-tolerance policy," she said.

Critics of the policy say it doesn't protect people of color. In fact, it punishes staff who grapple with issues of race in schools, said Packard.

"It is a longstanding principle in labor law that when application of a rule undermines the purpose of that rule, then no discipline is warranted," she said.

MTI is also representing a white teacher who was fired under the zero-tolerance policy, according to Doug Keillor, the union’s executive director. He added that four or five other staff members resigned following separate incidents. Keillor said his count only includes MTI members, and he doesn’t know how many non-MTI members might have been affected by the policy.