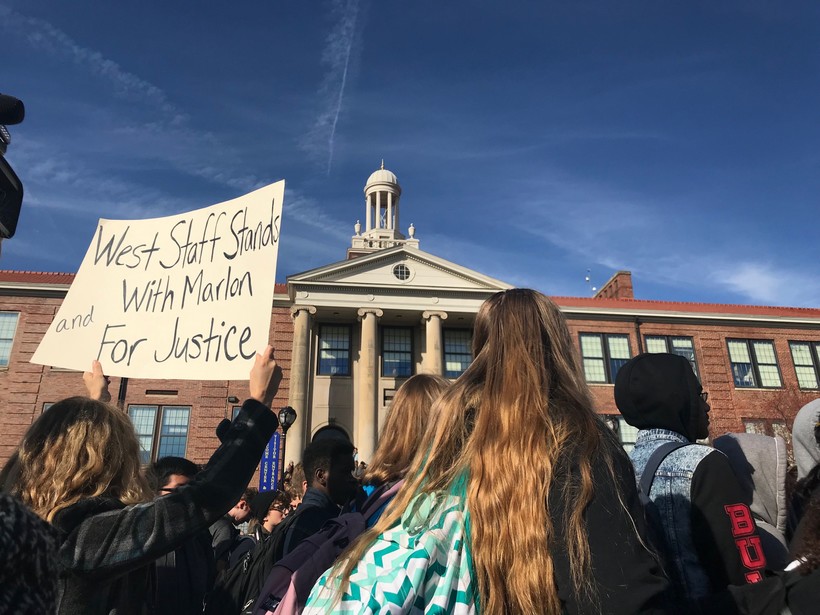 Students, faculty and other supporters rally outside West High School in Madison on Oct. 18, 2019, calling for the school to rehire Marlon Anderson, a black security guard who was fired for repeating a racial slur. Miranda Suarez/WPR

Some Madison West High School students skipped class Friday to protest the firing of a black security guard who was let go for repeating a racial slur while telling a student not to call him that word.

The Madison Police Department tweeted that about 1,500 students walked out of class Friday to protest the firing. Students, staff and other supporters marched about 2 miles from West High to the school district's administration building to call for Marlon Anderson, the fired security guard, to get his job back.

"Bring back Marlon," they chanted.

Cars driving by honked in support.

Madison Metropolitan School District officials said they have zero-tolerance policy for employees who use racial slurs. But Anderson said he was trying to defend himself after a student unleashed a number of obscenities Wednesday, Oct. 9, including the N-word. Anderson, who has worked for the district for 11 years, said he told the student not to call him the N-word and repeated the slur during the confrontation.

The prevailing message of the walkout was that context matters.

Many attendees said Anderson didn't repeat the word with malice, including Mikyla Mobley, a West High alumna and current student at Edgewood College. She said Anderson had a great relationship with students, including herself.

"I made a connection with him right away, instantly," Mobley said. "If I had an issue or whatever, he'd always make some sort of joke to make me laugh, and just be like, 'Ay, stay black, my sister.' Keep positive and whatever's gonna happen, everything will be alright."

Mobley added she would like to see a change to the zero-tolerance policy that got Anderson fired.

Gary Powell, a teacher at West High, said the policy has a chilling effect on teachers who want to talk about issues of race.

"Many of us that teach controversial issues, especially in the social studies department, have had to have a real careful rein on our tongues, because the words come up in text, come up in primary sources that we're using with the students," Powell said.

Anderson isn't the only staff member to be fired under the zero-tolerance policy for alleged use of the N-word, as reported by the Wisconsin State Journal and Madison365.

The Madison teachers' union filed a grievance on behalf of Anderson with the district. The story has gained national media attention, and the singer Cher tweeted Friday she would cover Anderson's legal expenses if he decides to sue.

Editor's note: This story has been updated to include additional reporting by Wisconsin Public Radio.