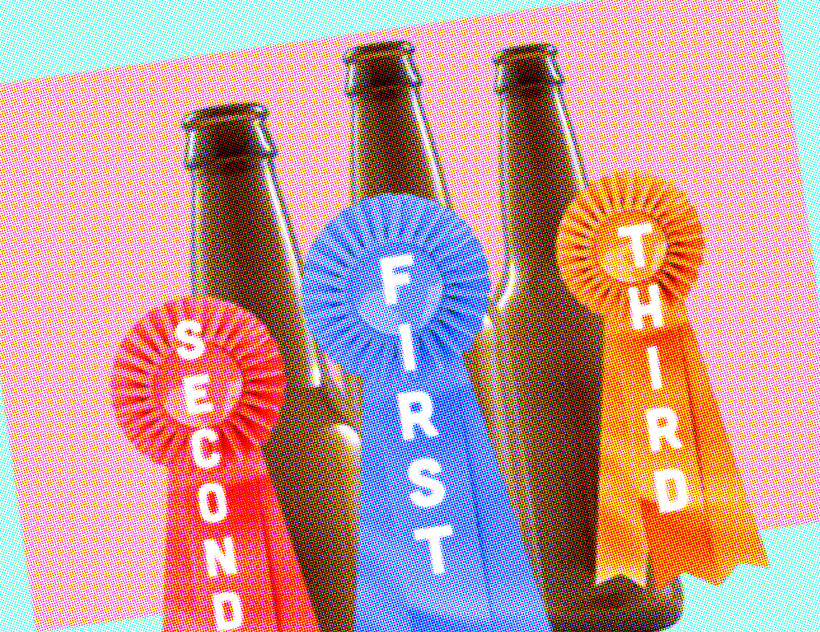 And The Winning Beer Label Is ...

A few weeks ago, WHYsconsin asked you all to tell us what Wisconsin beer label is your favorite, and we happily received suggestions of breweries all across the state!

We gathered your suggestions, dwindled the list down to the Top 10 and then asked you to vote on your favorite. With 1,906 votes cast you told us what you think are the five best Wisconsin beer labels.

Without further ado, here are the Top 5: 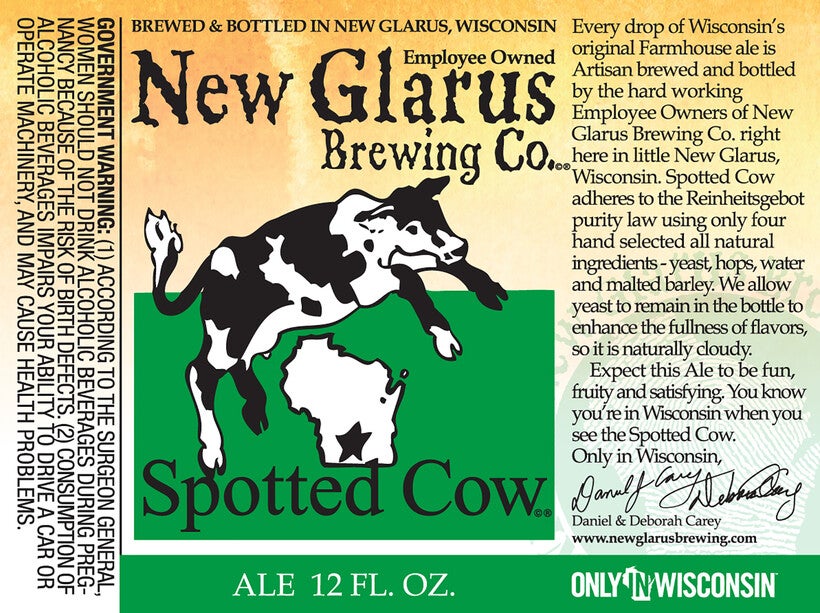 Type of beer: Spotted Cow is a Wisconsin farm house ale brewed in New Glarus — the namesake of the brewery. New Glarus Brewing Company got its start in 1993.

Description of the beer and label: New Glarus Brewing Company's brewmaster Dan Carey is the mastermind behind Spotted Cow, one of the state's most popular ales. Carey said he came up with the beer after visiting the German Homestead at Old World Wisconsin.

"There I found a crock pot of ale fermenting in the root cellar — a recreation of an ale brewed circa 1850. I imagined what such a beer would have been like. Obviously, it would be unfiltered and naturally carbonated. It might be made with a German Ale Yeast, it might contain fine Bohemian Hops, it might include local raw barley and wheat. There you have it — my Wisconsin Farm House Ale."

As for the iconic name of the beer, Deb Carey, the brewery's founder and owner, came up with it after a trip to England. She recalls driving through the countryside and seeing "remarkable-looking sheep everywhere."

She wondered what a foreigner visiting Wisconsin would find equally remarkable, and it hit her. "'A-ha! The Spotted Cows!'" And the name was born.

Fun fact: Like all of their labels, Spotted Cow's signature label was hand-drawn by Deb. 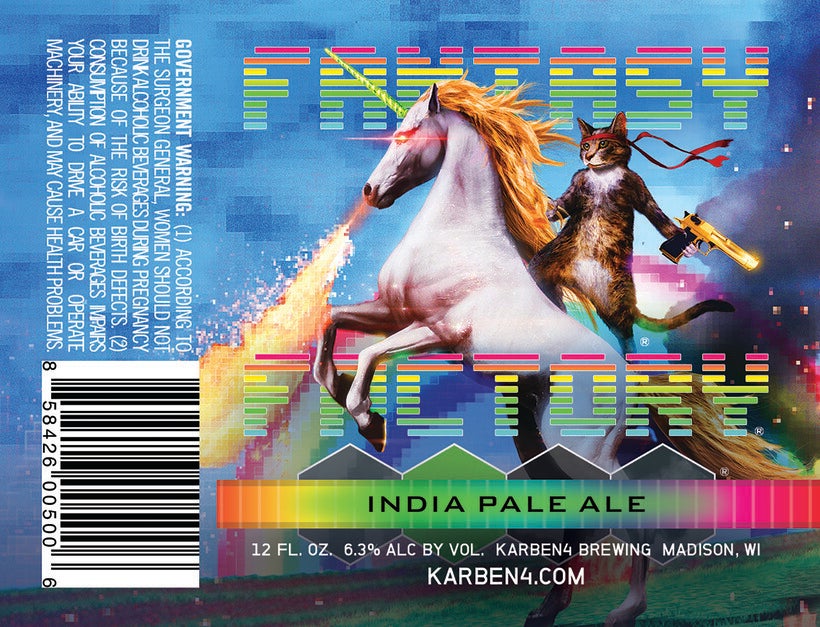 Type of beer: This India Pale Ale is brewed by Karben4 Brewing in Madison. The brewery opened in December 2012 as a brewpub in Madison. When it started bottling the flagship beer in Oct. 2014, it was "catapulted" into another realm of growth.

Description of the beer and label: Rainbows, cats and unicorns — what more could you want? Meet Rufius Maximus, described as a cat-god, riding his fire-breathing steed named Jerry.

Check out the brewery's rockin' description of the beer:

Hopheads crusade on a heroic quest for the holy grail of India Pale Ales. The subconscious composes paradisiacal scenes of malty waves crashing on a ripe lupulin landscape cascading hop flavors and aromas in profuse abundance. With humble confidence we offer this brew as fantasy made reality. Balanced in every detail and gushing resinous, exceptional citrus flavors and aromas that collaborate with soft bready notes surrendered from premium English golden malted barley, this beer is a tropical dreamscape. Epic.

Fun fact: The brewery knew the first bottled beer was going to be Fantasy Factory because of its popularity. The owners kept kicking around ideas for a label that adequately represented the beer but struggled until Ryan Koga, one of the owners and brewmaster, stumbled upon an illustration by artist Jason Heuser.

The owners flew to California to meet with Heuser, "and the rest is history," according to the brewery. The brewery has worked with the artist for all the company's packaging since.

Type of beer: This American Pale Ale is brewed by Central Waters Brewing Company in Amherst, located in Portage County. The company has been brewing beer since 1998, and the HHG made its debut in March 2015.

Description of the beer and label: HHG features bright hops with floral, citrus notes and a satisfyingly smooth malt backbone.

The beer was inspired by a band with roots near the brewery, Horseshoes & Hand Grenades, which got its start in Stevens Point, about 20 minutes east of Amherst.

According to the brewery:

Inspired by the music of Wisconsin band Horseshoes & Hand Grenades, this Citra & Mosaic-hopped Americana Pale Ale is best enjoyed with friends old and new while playing or dancing to your favorite tunes. Let's make some memories today!

If you haven't picked it up yet, the HHG stands for Horseshoes & Hand Grenades, a band "near and dear" to the brewery's heart.

The five members of the foot stomping, bluegrass band are the silhouettes on the label. The label is designed by Ryan Lynch, who is the brother of Horseshoes & Hand Grenades band member, according to the brewery.

Fun fact: Central Waters and Horseshoes & Hand Grenades throw a party together once a year at Central Waters' barrel warehouse. "Keep your calendars clear towards the end of October," the brewery said. 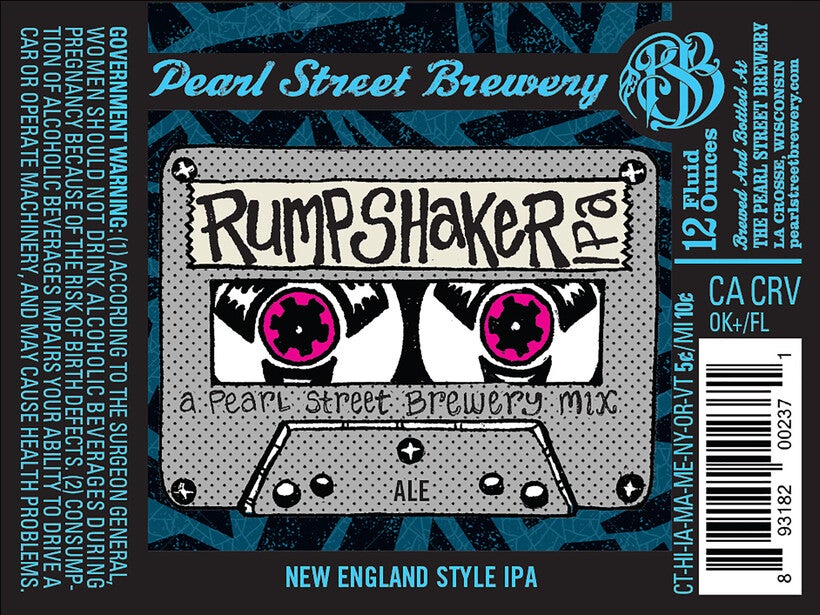 Type of beer: Rumpshaker is a hazy Indian Pale Ale, also known as a New England style IPA. Pearl Street Brewery has been brewing it for three years, making it a relatively new addition for the 20-year-old brewery "nestled in the river and bluff lands of La Crosse."

Description of the beer and label: Pearl Street Brewery owner Tami Plourde describes Rumpshaker as "very citrusy and juicy :)" and wanted the packaging to be similarly bright and fun. The bottle labels feature cassette tapes that go inside a six pack holder with a boombox on the outside, all hand-drawn by area artist Paul Hanson. 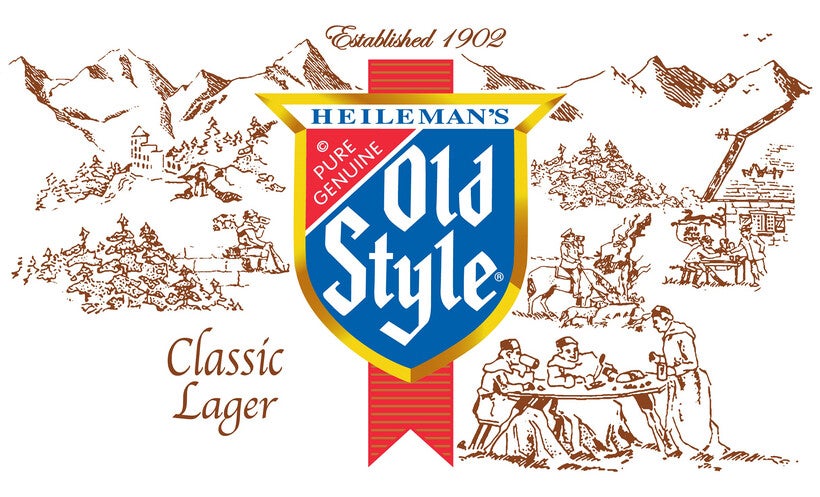 Type of beer: Old Style is a classic American lager with an ABV of 4.6 percent. The beer has roots in La Crosse where it was originally brewed by G. Heileman starting in 1902.

"Old Style revives the crisp, rich freshness of a classic lager with a light color and body, medium aroma and bitterness and a full flavor with a delicate aftertaste."

Fun fact: Aside from undeniable name recognition, Old Style is also a highly awarded beer, winning three gold and two silver medals in the World Beer Cup since 2006, and four silver and three bronze medals in the Great American Beer Festival since 2003.