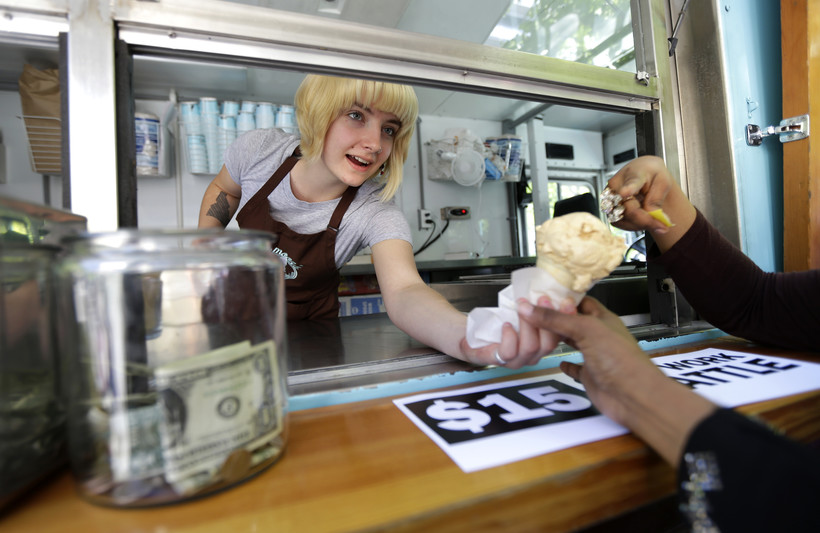 Caitlyn Faircloth, a worker with Molly Moon's Homemade Ice Cream, hands out free ice cream next to a tip jar, Monday, June 2, 2014, at a rally celebrating the passage of a $15 minimum wage measure outside Seattle City Hall in Seattle. The Seattle City Council passed a $15 minimum wage measure, Monday, but not until after debate over how long businesses will have to phase in the measure, and how tips, benefits, and other forms of compensation will be considered. Ted S. Warren/AP Photo

All city of Milwaukee employees could be paid at least $15 per hour by September under a proposal by Mayor Tom Barrett.

"Our employees should be paid a living wage," Barrett said during a press conference announcing the plan Wednesday. "This is a matter of fairness and respect for all people who work in city government."

The Milwaukee Common Council has to approve the proposal. The earliest that could be done is July 7.

The city’s lowest paid employees make just over $8 per hour. The federal minimum wage is $7.25 per hour.

The proposal will cost the city about $1.4 million a year, which will be covered by the city budget, said Makda Fessahaye, director of employee relations for the city.

Barrett’s announcement comes at a time when employers are struggling to find workers. Barrett said he’s well aware of the competitive market.

"Is there some altruism involved, yes. Is there some hard-headed practicality involved, absolutely yes. And there is nothing wrong with that," Barrett said. "We realize in some areas there is a tight market, and we want to be competitive."

The city’s much anticipated July 3 fireworks display had to be canceled in 2020 because of the coronavirus pandemic. It has been canceled this year, too, but this time because of staffing woes at the Milwaukee County Parks Department.

The Parks Department is operating at about 60 percent of its pre-pandemic staffing levels, which has also affected lifeguards this year.

The Milwaukee County Transit System also announced it won’t be offering special service to Summerfest this year because of its shortage of bus drivers.

Milwaukee County Executive David Crowley said more than 125 bus drivers have been hired this year, but the transit system is still short about 60 drivers and mechanics even with hiring bonuses of $1,000 to $2,000.

"When you think about government in general, it’s hard for us to compete with some of the salaries in the private sector," Crowley said. "I think you’ve also seen this change of behavior in the workforce. Our young people have been stuck indoors for the past year and some of them might want to do some summer activities. There still can be challenges related to child care, or transportation related to finding work or keeping work."