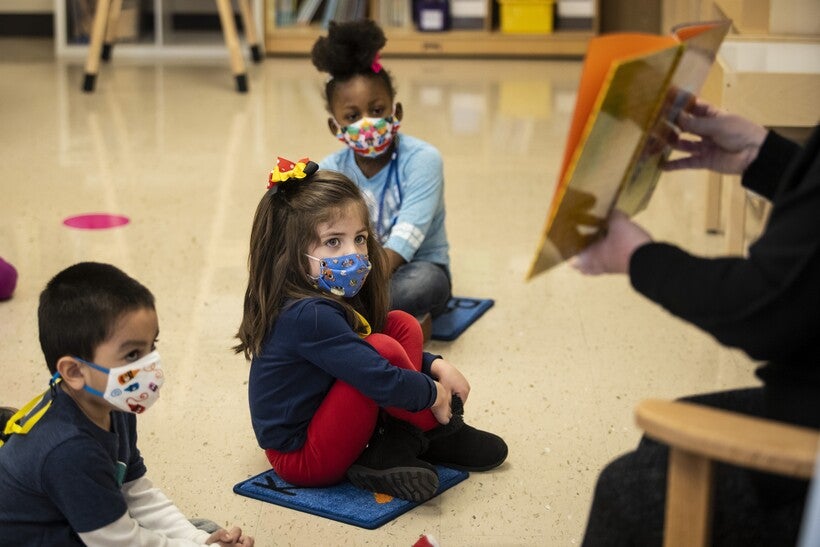 Pre-kindergarten students listen as their teacher reads a story at Dawes Elementary in Chicago, Monday, Jan. 11, 2021. Chicago Public Schools students began their return to the classroom Monday as school doors opened to thousands of pre-kindergarten and some special education students after going remote last March due to the coronavirus pandemic. Ashlee Rezin Garcia/Chicago Sun-Times via AP

About two dozen high school students in Medford walked out of class earlier this month as part of an effort to push district officials to say it was optional for students to wear face masks. The community is the latest Wisconsin school district to loosen or eliminate mask requirements.

Following the Wisconsin Supreme Court's decision throwing out the statewide mask mandate, officials from the rural, central Wisconsin district voted to make face masks optional for kindergarten through fourth-grade students in classrooms. The high school students' action on April 16, demanded masks be optional for them, too.

In a video posted online, a school staffer told the protesters they were causing a distraction and needed to leave school property. The students moved their protest to the sidewalk. The district's superintendent later told the students they should speak at the next school board meeting.

On Monday night, some students did just that. The school board responded by making masks optional for all grade levels at Medford schools.

Medford is the latest Wisconsin school district to loosen or eliminate mask requirements. Medford is in sparsely populated Taylor County and has seen few COVID-19 cases in recent weeks. One school board member cited a recent message from Dr. Ronald Cooper, the district medical adviser, recommending masks for high-risk individuals and in crowded conditions rather than requiring them for all.

But Medford's move is also part of a statewide wave of votes by school boards in rural and suburban areas. And more could be coming. Across Wisconsin, parents and students are organizing groups opposing mask requirements in schools.

The push comes as COVID-19 cases have been declining in Wisconsin and vaccinations have continued to increase. But efforts to remove mask requirements in schools go against the guidance of federal, state and local health authorities who say there's still too much of the virus circulating in communities and too many people who are still vulnerable to its effects.

In the past month, districts across the state have considered or taken action on the issue:

The wave of loosened restrictions also comes as Wisconsin has reported a rise in a rare inflammatory condition in children caused by COVID-19. Of 90 cases in Wisconsin of multisystem inflammatory disorder as of last week, the average age of those affected was 7 years old.

In Medford, the school board's move to make masks optional came with a ceiling. If the weekly average of new COVID-19 infections in Taylor County exceeds 15, the district's mask mandate will be back in place. State data show that the county's average number of confirmed cases exceeded that level during the statewide spike in the fall and winter, but has been in single-digits for months. As of Sunday, the county had had three confirmed cases in a week. About 20,000 people live in Taylor County.

At Monday's school board meeting, speakers including parents and students gave vent to months of frustration at having to wear masks. A junior who had been part of the walkout said that "the emotional stress that (wearing a mask) has put on me has been insane."

Christopher Hughes, an 18-year-old senior, said his grades had dropped and he'd gained weight as a result of wearing a mask.

"Wearing this doesn't help us," Hughes said. "We ask that (the district) make it optional. Not that we mandate it or that we take it completely away. We just want it to be a choice."

There is broad scientific consensus that mask-wearing helps to reduce the spread of the virus.

Some speakers also weighed in on the side of continuing the mandate. School Board President Dave Fleegel, who made the motion to lift the requirements, acknowledged that the board had heard from proponents as well as opponents of the policy.

In January, a report by the federal Centers for Disease Control and Prevention, citing studies in Wisconsin Rapids, North Carolina and Mississippi, found that school reopenings in the fall appeared not to have driven community spread of COVID-19. But the school districts studied followed strict mitigation protocols, including mask requirements for students, teachers and staffers. In the Wisconsin Rapids study, teachers said compliance with mask requirements was nearly universal — they reported 92 percent of students wore them.