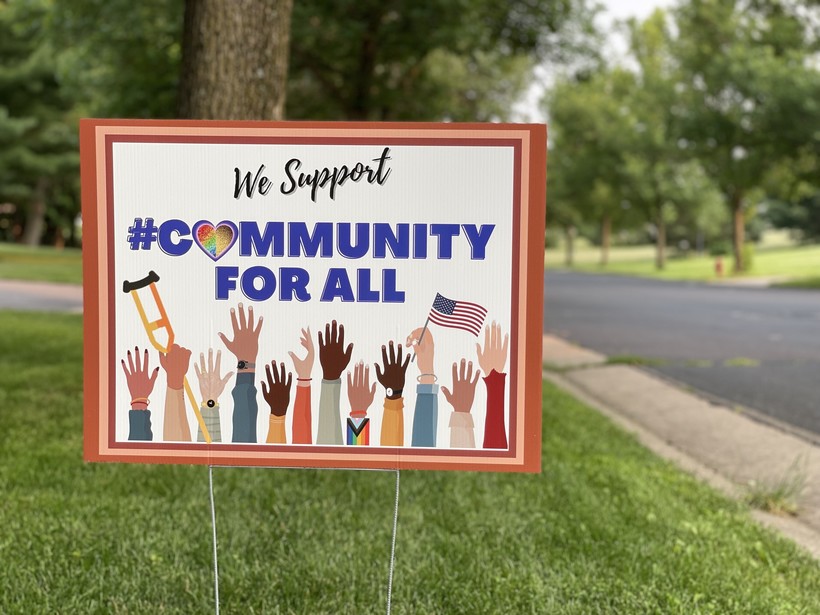 A yard sign displayed in Wausau in 2021 offers support for the "Community for All" resolution supporting diversity. The advisory resolution became the subject of bitter political debate. Rob Mentzer/WPR

After 'Community for All' battle, Marathon County Board eliminates Diversity Affairs Commission

A newly elected County Board voted to end the 9-member commission, which had a mission of promoting diversity
By Rob Mentzer
Share:

One year after a diversity resolution became a political flashpoint in central Wisconsin, the Marathon County Board has voted to eliminate the Diversity Affairs Commission that sought to pass it.

The fight in Wausau and Marathon County over the "Community for All" resolution in 2021 became a stand-in for broad, national political debates. The advisory resolution would not have changed any policy or compelled any action, but its language recognized diversity as a strength and acknowledged the existence of racial disparities. That was enough to make it the subject of months of bitter argument in public meetings and behind the scenes. It was rejected by the Board in a tie vote in August.

Now, the dissolution of the nine-member Diversity Affairs Commission that promoted "Community for All" is the latest ripple effect from that debate.

The Marathon County Board made the move Tuesday evening as it met to set rules for the Board's next two years. The county had put the commission in place less than a decade ago, with a mission to "promote cultural competence" and "cultivate an environment where cultural diversity can flourish."

The notion that the advisory resolution was functioning as a Trojan Horse for left-wing politics was widespread in the county.

Members of the Diversity Affairs Commission had launched the effort following the murder of George Floyd in Minneapolis and amid the broad social justice campaign that grew out of it. That included a 2020 march in Wausau that was one of the largest political gatherings in the history of the 40,000-person city. The backlash against Community for All was a backlash against a broader set of ideas.

But the rancor over a purely symbolic resolution — one that even opponents acknowledged contained little to object to in its actual text — appeared out of proportion to many. It attracted a critical New York Times story, which highlighted racist statements by elected leaders and Community for All opponents.

On Tuesday, the County Board ultimately voted to make the duties of the commission, including reducing social disparities and promoting cultural competence, a responsibility of the County Board as a whole.

That will dilute minority voices and slow progress, supporters of the Diversity Affairs Commission argued in a last-ditch effort to save it. County Board member Yee Leng Xiong, the director of Wausau's Hmong American Center who had chaired the commission, said the body had allowed for greater representation of the region's minority population.

"It would be unfortunate if we would be going backwards rather than continuing forward," Xiong said.

The commission had included Black and Hmong members, and its dissolution removes one of the significant channels through which minority communities were represented on the board. Xiong is now the only Hmong member of the board. William Harris, the first Black person to be elected to local office in Marathon County and one of the driving forces behind the push for the Community for All resolution, did not seek reelection to the County Board this month.