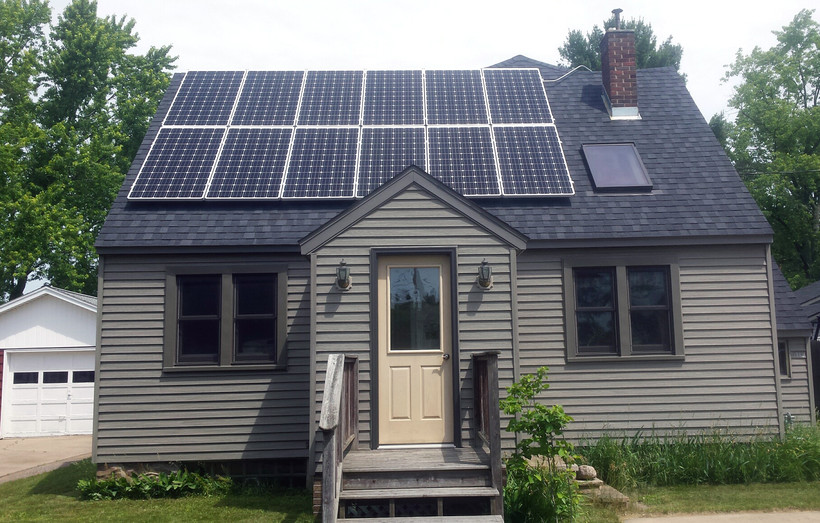 Solar panels have been installed on the Case home in Stevens Point.

Solar power and other renewable energy sources continue to make gains in Wisconsin to the point where some advocates are talking about the end of electric utility monopolies in the state.

Most people in Wisconsin still use electricity that comes from power plants running on coal, natural gas or nuclear energy. But with dropping prices for solar energy panels the last few years, more folks are signing up to have solar arrays in their yard or on their homes.

Enough are at least curious that on Saturday at the Midwest Renewable Energy Fair, a busload of people signed up for a tour of homes in the Stevens Point area that have solar panels installed by the company NorthWind Renewable Energy.

One stop was the home of Jackson Case, who showed off the solar panels, electricity converters and other equipment that were put in last year. Case said he's very happy with the system, including the fact that, on sunny days, he can sell excess electricity back to the local utility, Wisconsin Public Service Corporation.

"Right now, Public Service owes us about $250, it's kind of cool." Case said. "And that along with the solar thermal we put on about 10-12 years ago and a wood stove inside, we have come this close to being off the grid."

That desire to wean themselves off of climate-changing energy sources used by local utilities seems to be part of the motivation for people who might spend tens of thousands of dollars on a solar power system.  But the solar buyers not only reduce their use of fossil fuels; they also -- in the words of another solar homeowner in Stevens Point, Jan Roberts -- become more independent from big power.

"I don't like utility companies, " Roberts said, adding that  she really doesn't like that investor-owned utilities are raising some fixed rates for consumers. She also contends those companies are actively making it tougher for more people to go solar.

"I just wish the policies of the utility companies encouraged solar systems," said Roberts. "I mean, I don't see why they get solar power from me for 4 cents a kilowatt, and when I need it from them during the winter they change me 11 cents, which really peeves me."

Utilities argue they need to maintain the electrical grid and buy coal, natural gas or uranium to supply power for the majority of Wisconsin residents. But some in the renewable energy sector argue that majority could shrink very soon, leaving power companies to act more as power managers than providers.

During a keynote speech, John Farrell of the Institute of Local Self-Reliance told the energy fair that a federal study has shown as much of 40 percent of electricity in Wisconsin could come from rooftop solar. "That's not counting parking lots where we could put solar," he said. "Brownfields, landfills, solar anywhere else you can think of. That's an enormous amount we can do at a local level, right where we use electricity at minimal transmission costs," Farrell said.

The group RePower Madison has been pushing local utility MG&E to become more of a community partner and get more electricity from renewable sources. RePower's Mitch Brey said there's been some progress.

"But they are not really as ambitious as we need to tackle these problems," Brey said. "They lack, really, the specifics or the metrics to be considered a true plan."

"No other Wisconsin utility has put forth a framework like MG&E's," she said. "We consider it a very ambitious plan, and if we can go faster, we will."

As more homeowners generate their own power with solar panels, Brueck said, that does make for more challenges in managing the electrical grid. But she hesitated on speculating whether the business model for utilities will change substantially. She says technology and price changes may give power companies more generating options, too.