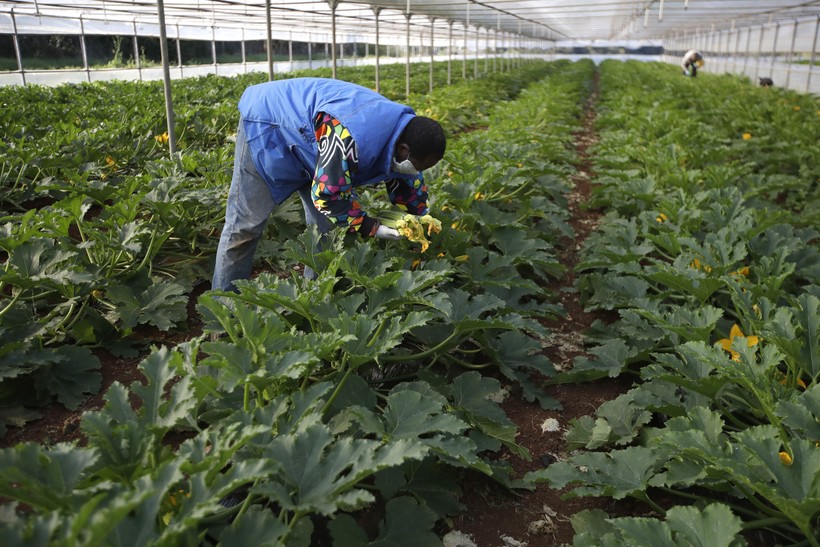 Mamadou Bah, a migrant from Guinea, wears a sanitary mask to protect against coronavirus as he harvests zucchini at the Agricoltura Nuova farm near Rome, Tuesday, April, 7, 2020. Alessandra Tarantino/ AP Photo

Every spring, about 5,000 migrant workers make their way to Wisconsin to work in agriculture.

Many come from Texas and Florida and work on farms across the state helping farmers harvest crops and process food during the peak season from late April through the fall.

But this year is different.

As the COVID-19 pandemic sweeps the country, the crowded conditions migrant farm workers — the majority of whom are Hispanic or Latino — live and work in leave them uniquely vulnerable to contracting and spreading the virus.

They’re essential workers, but advocates fear the very nature of their work, side by side in the fields, could leave them facing the brunt of the crisis, with limited access to resources and protection.

Without them, there wouldn’t be food on the shelves, said Rod Ritcherson, who oversees the farm worker programs for UMOS, United Migrant Opportunity Services.

"Without healthy farm workers, who is going to harvest the crops?" he said. "So when you go to your store to buy your food, the shelves may not be as stocked, or the prices of those food items will be much higher than what we usually see."

Many travel to Wisconsin in a bus or a shared vehicle, and when they do get here, they’re often shuttled to work sites in crowded vehicles, she said.

"As of right now, we'd say (the risk) is pretty high," Pacheco Rojas said. "Some of the employers ... have been trying to shuttle their workers in less numbers because they ... realize that social distancing is really key to stopping the spread of COVID-19."

Yet social distancing is difficult to achieve in the camps many workers stay in where shared cafeterias, bathrooms and open-concept dormitories are the norm.

Pacheco Rojas said the best thing to do to mitigate spreading the virus is to act like someone already has it. If someone were to test positive, they, along with those they work closely with would need to be isolated.

"That could actually be very debilitating ... as that may be as many as four people to 30 people," she said.

Yet because they are seasonal, many migrant farm workers — some of whom are undocumented — aren’t eligible for health insurance, or are unable to keep up with the paperwork because they move so frequently, she said.

That leads to greater worries, not only for the workers' health, but that they might not seek out care if they are ill.

"One of their employer benefits usually is not health insurance, is not paid sick leave, is not paid family leave," Ritcherson said. "This is an issue."

"And we fear that a migrant farm worker, if they are experiencing symptoms — they hopefully will not be reluctant to speak up — but in the past, we know that that is the attitude, that they may not speak up as readily as someone else," he continued.

Farmers are already bracing for not having enough workers after the U.S. State Department suspended immigrant visa interviews in Mexico, including temporary migrant workers, in an attempt to reduce the spread of coronavirus.

The Trump administration is also calling for lowering migrant workers wages during the crisis to offer relief to the farm industry, though the move has incited pushback from both labor rights advocates and immigration hardliners alike.

"Farm workers are already among the lowest-wage earners among the working poor," Ritcherson said. "So the fact that they have been deemed essential workers for this country's food supply, it’s interesting that the current administration is trying to lower the wages of already low-wage earners."

At the national level, migrant farm workers make between $15,000 and $17,000 a year, he said. And at this point, they aren’t eligible to receive a stimulus check from the federal government.

"The reason that migrant farm workers travel to Wisconsin is because the local workforce is either unable or not willing to do this type of hard work," he said. "If the migrant farm workers are not here to harvest the crops, those crops, in a sense, are going to die on the vine." 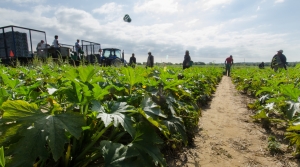 Migrant farm workers, who often work and live together in close quarters and have limited access to resources, are vulnerable to the spread of coronavirus. We talk with two advocates doing outreach to find out what risks migrant workers face and what is being done to protect them — and our food supply.