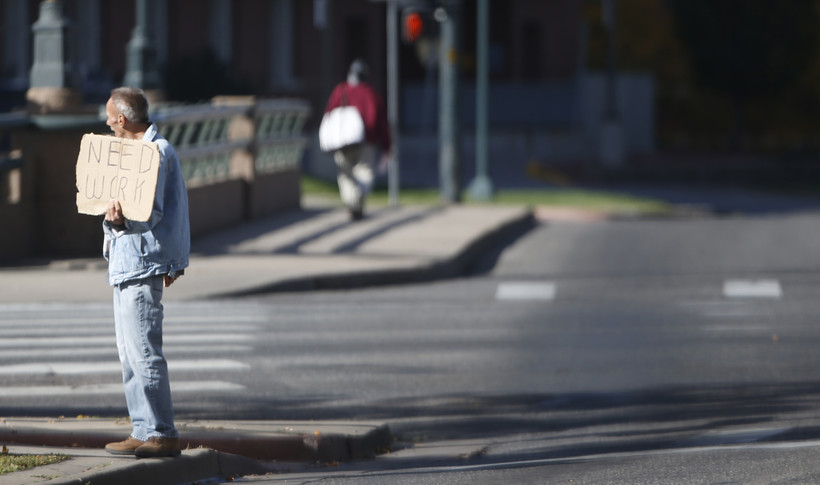 The ACLU of Wisconsin asked leaders of Altoona, Glendale, Mequon, Racine, Superior, Shorewood, Waukesha and Wauwatosa to remove their panhandling ordinances in reference to a 2015 U.S. Supreme Court decision in the free speech case, Reed v. the Town of Gilbert.

The letters are part of a national campaign targeting 240 panhandling laws across 12 states organized by the National Law Center on Homelessness and Poverty.

"People who ask for donations for themselves deserve the same protections under the First Amendment as someone asking others to donate to a charity," Chris Ott, executive director of the ACLU Wisconsin, told WPR's "The Morning Show."

Shortly after Reed v. the Town of Gilbert, Norton v. the City of Springfield applied that ruling to panhandling ordinances, saying you can’t target speech because you don’t like the topic or the message, said Karyn Rotker, an attorney for the ACLU of Wisconsin.

"If two people were walking down the street and someone said, 'I want to raise money for a charity, can you give me $500 or $1,000 to feed the homeless?' That would have been permissible under any of these quote anti-panhandling ordinances unquote," she said.

Yet, if a person asked for $2 to feed himself or herself on the street, that would have been a criminal or a municipal violation under anti-panhandling laws, Rotker said.

Waukesha City Administrator Kevin Lahner, who has not yet seen the letter, was surprised Waukesha was included in the list, he said.

The city's ordinance prohibits panhandling at bus stops, at any public transportation vehicle or facility, or within 50 feet of an ATM or entrance to a bank. Harassing or intimidating passerby for money or goods is also included in the ordinance. Violators can be fined up to $50.

"It's a pretty reasonable regulation," he said. "People have expectations for not being asked for funds at certain public places."

Panhandling ordinances vary across municipalities, in some you can be ticketed just for asking, in others it depends where you're panhandling, and in some places you are ticketed only when showing aggressive behavior while panhandling.

Yet everywhere they’ve been challenged in federal court since 2015, they’ve been found unconstitutional, Rotker said.

Wauwatosa's ordinance cites "aggressive panhandling" and received the letter late last week. The common council will review it in the coming weeks, said City Attorney Alan Kesner in an email.

City of Superior Mayor Jim Paine told WPR News that he was embarrassed to learn of the panhandling ordinance on the books. He said he expects the city council to repeal the ordinance. Paine said businesses are already protected by other ordinances if panhandling occurs on private property.

"On public property, though, you are protected by the First Amendment to engage in free speech so long as you’re not harassing people, causing a disturbance or otherwise being disorderly in violation of already existing ordinances or good public order you have the right to free speech," Paine said.

Paine said that doesn't mean panhandlers can harass people or create disturbances in public places. But he said simply asking for money is protected speech.

Altoona City Administrator Mike Golat said the ACLU letter has been referred to their legal counsel. He said Altoona's panhandling ordinance was passed about a year ago, just before the opening of a large public park and concert venue.

"I think the police department just said, 'Look, if there’s issues with panhandling where we believe public safety is compromised, we need to have a way to take some action or some enforcement action,'" Golat said.

Twenty-five local panhandling ordinances have been ruled unconstitutional since the SCOTUS ruling and 31 municipalities have voluntarily taken back their anti-panhandling laws, according to the ACLU.

In an email to WPR, University of Wisconsin-Madison professor of political science and legal studies Howard Schweber said the 2015 U.S. Supreme Court ruling and subsequent appellate ruling have implications for any type of government regulation of speech.

"Panhandling is the first test area — there have been challenges in a dozen cities across the country, and lots of municipalities are rewriting their statutes to comport with the new standard," Schweber said. "It is a near certainty that Wisconsin towns and cities will have to at least re-draft their laws so that panhandling is only limited where it poses a threat to safety or freedom of movement."

The focus of the ACLU Wisconsin campaign, said Ott, is to find solutions at the heart of the issue and to not criminalize poverty.

"(It’s) also saying we need to try and find more ways to provide affordable safe and decent housing for people who need it," Rotker said. "We want the discussions to involve trying to fix the problem, the underlying issues that caused people to end up panhandling."

Editor's note: This story was updated at 4:19 p.m. Thursday, Sept. 6, 2018, to include additional comments from the Altoona City Administrator Mike Golat. WPR News' Rich Kremer contributed to this report.