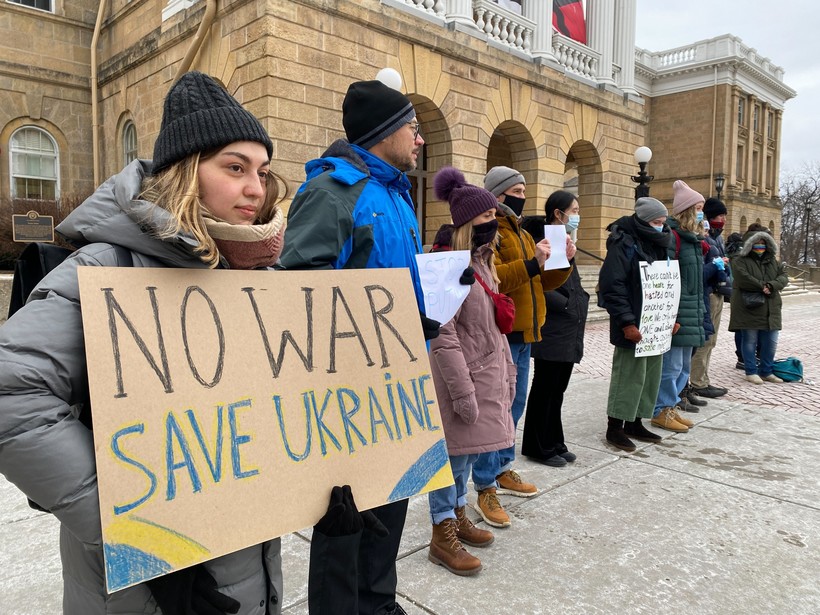 Yulia Khalikova (left), a postdoctoral student who is originally from Russia, gathers with other UW-Madison students to protest Russia’s attack on Ukraine outside Bascom Hall on Thursday. Diane Bezucha/WPR

Students fear for family and friends and possibility Ukraine becomes proxy for battle between U.S. and Russia
By Rich Kremer
Share:

Russian and Ukrainian students and teachers at the University of Wisconsin-Madison held a small, mostly silent protest on campus to show solidarity with Ukraine and call for Russian President Vladimir Putin to halt his invasion of the former Soviet republic.

It was bitter cold and the mood was somber as the students stood with signs that said "Save Ukraine" and "There can't be one heart for hatred and another for love."

Aside from a few chants of  "stop Putin" and "save Ukraine," the students stood in silence.

"Personally, I just thought, 'What can I do?'" Russian post-doctoral political science student Yulia Khalikova said. "And I was like, 'Ok, if I were in Russia I would probably go in the street anyway.' At least to do something and not sit at home." 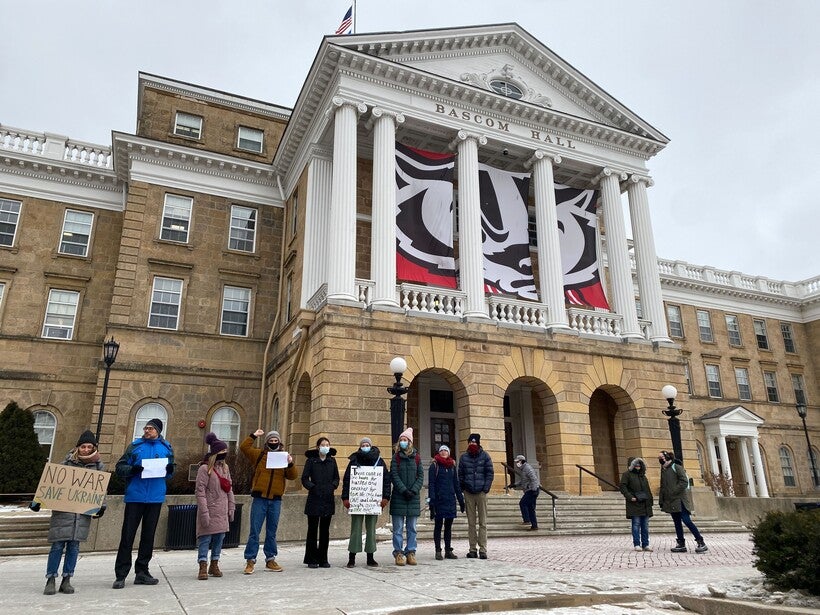 University of Wisconsin-Madison students gather to protest Russia’s invasion of Ukraine in front of Bascom Hall on Thursday. Diane Bezucha/WPR

Valeria Umanetz is a graduate student who was born in Russia now studying political science at UW-Madison. She called the war "absolutely inhumane."

"And, we don't know what else to do other than protesting outside against their inhumane actions that our government undertook in Ukraine," Umanetz said. "And our friends, our family, our relatives are suffering there, and it's impossible to see that in the 21st Century."

Anna Popovych came from Ukraine to study sociology and is now a graduate student at UW-Madison. She said fortunately her family has been outside that country for the last couple of months but was planning to return until news of the Russian invasion broke.

"But my friends are there and of course I'm concerned about their safety," Popovych said. "They're not safe, unfortunately. Some of them are evacuating to the western part of Ukraine. Some of them are hiding in the bomb shelters. Sometimes it's just basements of the buildings. Several stations in the subway are functioning as bomb shelters as well."

Popovych said she fears that Ukraine will become a battleground where the U.S. and Russia figure out "who is the strongest."

"I'm very afraid, actually, of this scenario," said Popovych, who added she didn't believe the invasion would actually happen until Wednesday evening. 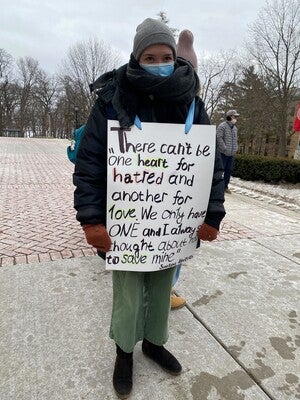 UW-Madison has a number of students and teachers from Russia and Ukraine, according to Center for Russia, Eastern Europe and Central Asia director Ted Gerber. He said the invasion led the center to cancel a pre-planned forum scheduled for Thursday. Instead, he said they're working to hold an open forum for affected students and faculty to share questions and reactions to the news.

Gerber did not participate in the protests Thursday but advised participating students about policies and rules related to protests on campus.

"One of the challenges we face is that we host a number of scholars from Russia itself," Gerber said. "And of course, rightly a lot of the attention is focused on what Ukrainians are going through with their country being attacked. But also, this is deeply traumatic for Russians. Many of them feel deeply upset that their country is involved in this horrible, aggressive action, and they're very concerned about the domestic repercussions that we're likely to see in Russia."

In addition to directing the center, Gerber has studied sociology in Russia, Ukraine and other nations in Central Europe with a focus on how the collapse of communism helped shame social relations, migration and economic mobility.

He said it's hard to accurately gauge public opinion in Russia because it's such an authoritarian country that citizens would be afraid to express anti-government views in surveys.

Gerber's intuition is that Russian citizens aren't buying Putin's rhetoric about the war being necessary to stop western aggression.

"I think Putin has really crossed the line by launching an aggressive, pointless war against Ukraine," Gerber said. "I think most Russians have connections to Ukraine, through marriage and family."

Gerber said the war in Ukraine could signal the beginning of the end of Putin's regime.

"Either he's completely lost his mind, which is certainly a possibility, or I think he's really driven by fear," Gerber said. "I think he knows better than we do what risks he and his government face as a result of discontent in Russia. And so he's banking on the war as an excuse, a rationale to crack down on his own society."