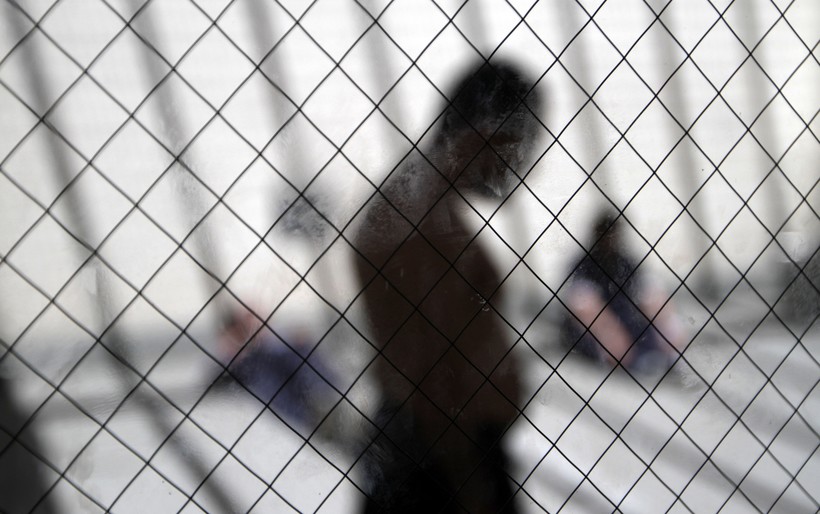 In this May 26, 2010 file photo, men sit in the sun at the Otay Mesa immigration detention center in San Diego. Gregory Bull/AP Photo

A private company is proposing a 500-bed immigrant detention facility in the city of New Richmond in St. Croix County. Public reaction to the plan has been swift and city officials have been overwhelmed by questions.

Immigration Centers of America submitted a rezoning request with the city’s planning commission on April 5 in order to build a 500-bed immigrant detention facility for adults. The company seeks an amendment to classify a residential parcel into a "Z-8 Special Use District."

ICA spokesman John Truscott told WPR that the detention center is in response to a move by former President Barack Obama's administration to move detainees from county jails into specific detention facilities. In 2009 He said housing immigrant detainees among criminals in jails isn't ideal.

"So, they’re looking for something that is a little more accommodating, more humane and just better for the time period that they’re waiting for the detention hearings."

A press release posted on the city's Facebook has drawn more than 1,000 comments, most of them opposed, and city officials say their offices are swamped with calls. Mayor Fred Horne told WPR the city has hired a PR firm to help free up office staff.

Immigration Centers of America was founded in 2008 and describes itself as being "solely focused on providing exceptional detention and transportation services for the United States Department of Homeland Security." The company has one facility in Farmville, Virginia that was built six years ago according to ICA.

On March 13, U.S. Immigration and Customs Enforcement (ICE) put out a request for proposals seeking companies interested in building a 500-bed facility within 100 miles of its Enforcement and Removal Operations Field Office in Fort Snelling, Minnesota. ICA has also reached out to the Village of Baldwin.

Horne, the New Richmond mayor, said the city is planning a series of community meetings to gather public comment on the proposed detention facility, which will be first considered by the city’s plan commission, though no date has been set. He said New Richmond prides itself on public input on important matters. But Horne said with so little information available right now rumors are swirling.

"Let’s deal with facts. Let’s not deal with rumors. I’ve been hearing in the downtown part about how the city is building this," said Horne. "The city is not building this at all. It is not our project. It is not our land. It happens to be in the city limits. It’s like another business trying to come into the community and we want to hear from the community, is this a good fit for us?"

Horne said he’s also wondering about who would be housed at the proposed detention facility. While the application states it would be for adults he said those kinds of plans can be fluid.

"One of the questions becomes ... does it change over time?," Horne said. "Because we’ve had companies that come in under one thing and things change over the years. So, that’s an open question and it’s something that we want to get more information on as well.”

ICA spokesman John Truscott said the company will need to be able to respond to changes required by the federal government.

"We go into this with the assumption that it will be men and no families, no children but the federal government could change that so we have to be prepared to make some shifts," Truscott said. "But going into it right now we’re just assuming it’s men."

New Richmond Resident Anthony Howe is strongly opposed to the idea of the city hosting an immigrant detention facility. He said it would cast a cloud over the city in the midst of national tensions on immigration.

"I think that it would be morally corrupt for the city of New Richmond to be complicit in a system that profits from the hardships of immigrants, refugees, asylum seekers, families, children," said Howe.

Some comments on the city’s Facebook page have been supportive noting the potential for 200 jobs listed in ICA’s proposal. Howe disagrees that there’s even a need for jobs as New Richmond and St. Croix County are fast-growing communities.

State Rep. Rob Stafsholt, R-New Richmond, said the issue highlights the importance of local control in government. His office has also been inundated with calls and questions regarding the proposed detention center.

"And one of the questions that I get a lot is if someone is detained at that facility and then they’re released, are they released back to their place of origin, where they came from, whether it be Nebraska or Minnesota or Texas or whatever it might have been, or do we release them in the city of New Richmond?" said Stafsholt.

The rules surrounding local decisions on zoning and conditional use permits were changed by lawmakers in 2017 and signed into law by former Gov. Scott Walker. An analysis put out by the Wisconsin League of Municipalities in 2018, notes that one of the changes requires zoning or plan commission members to only consider "substantial evidence" rather than public opinion when making decisions related to rezoning or conditional use permits.