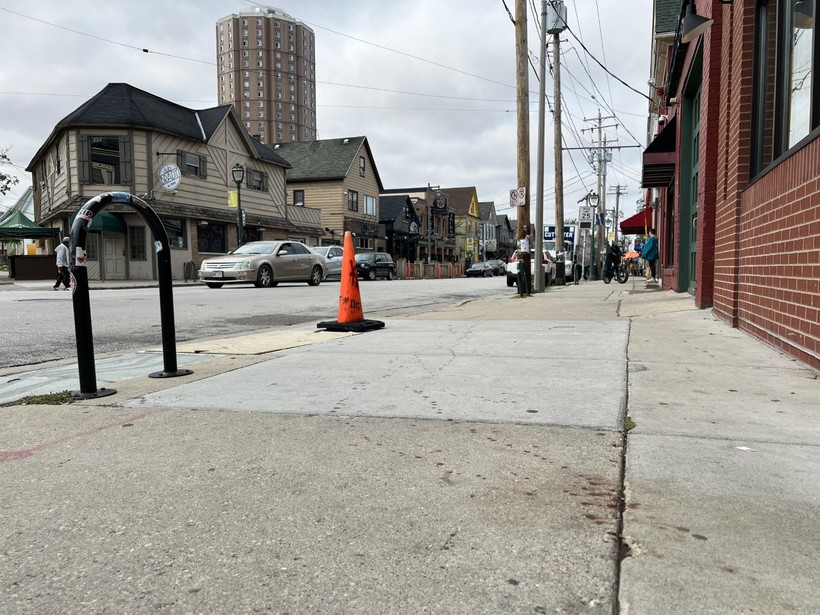 A shooting near Milwaukee’s Brady Street left four injured, one critically, early Wednesday morning. As of Wednesday afternoon, Milwaukee police said they are still looking for the shooting suspect.

It’s at least the third major shooting on or near the popular street in as many months. It’s also the latest major shooting near some of the city’s most frequented locations for entertainment and nightlife — after at least two shootings on Water Street shocked visitors and residents alike in recent months.

Those injured in the shooting Wednesday include a 23-year-old man, a 29-year-old man and a 36-year-old woman, all of whom are from Milwaukee. A 28-year-old Milwaukee man sustained life-threatening injuries as well. Police said he is in "grave condition."

"The circumstances surrounding the shooting are under investigation," a press release from the Milwaukee Police Department said.

Alex Kessel lives less than a block from Brady Street. She followed blood droplets left from the shooting, located just feet from her property, on Wednesday afternoon.

"It’s super close to home," Kessel said. "We love this neighborhood. There’s so many great people in this neighborhood, but I think when something like this happens it shakes you a little bit.

Brady Street is home to numerous restaurants, bars and small businesses. It also plays host to festivals throughout the year, many of which bring visitors in from across the state. Christine Goralski was awakened by emergency sirens Wednesday morning, as police said the shooting happened at 1:41 a.m. She recently moved back to the Brady Street area after originally living there in the 1980s.

"Brady Street, I discovered, is a very different place today," Goralski said as she walked the area where the shooting occurred.

City on pace to break another homicide record

The shooting is the latest in a recent string of incidents that have impacted residents and business owners in the area.

Meanwhile, 21 people were injured in three separate shootings near Water Street in Milwaukee in May. Two weeks ago, a shootout following a police chase on Water Street left a 47-year-old homicide suspect dead and a 22-year-old bystander injured.

Jonathan Brostoff is running for a seat on Milwaukee's Common Council. He grew up near Brady Street and called recent shootings in the area a "gun issue."

"To me, the shootings that happen on Brady Street, at their core, are a gun issue," Brostoff said Wednesday. "It’s way too easy for people to get their hands on guns and people who may not even have any sort of training or respect for guns or what they can do."

There have already been 158 homicides in Milwaukee in 2022, up from 129 at this point last year. Milwaukee saw a record 197 homicides in 2021. The city is on pace to break that record this year, according to data from the Milwaukee Police Department.

Mayor Cavalier Johnson was not available for comment Wednesday, but his spokesperson, Jeff Flemming, sent out a statement following the incident.

"The Mayor has expressed his alarm about this and other shootings. The Milwaukee Police are doing a solid job in holding people accountable for their violent acts. We are energizing the Office of Violence Prevention. And, every day, we are advancing new ideas to increase safety," Flemming wrote.

"Ultimately, people who go armed into city neighborhoods must put down the guns. Disputes cannot be settled with firearms. The Mayor supports reasonable legislative changes to keep guns out of the hands of people who should not have them," the statement continued.

Flemming added that Johnson is working with "community groups and churches to engage them in violence prevention."

Goralski, who is also a community activist, said the uptick in violence is concerning.

"It’s evidence that this is not the same Brady Street that it used to be," she said.

The Brady Street Business Improvement District declined to comment on the incident.

"You could pick certain parts of the city and say, 'This is a rough spot in the city,' but the reality is this could happen anywhere. But hopefully it doesn't happen again and hopefully there are certain things that are put into place, because Brady is an amazing neighborhood," Kessel said.

Some area residents also said reckless driving in the area is concerning. It's an issue that has plagued the city in recent years. In 2020 alone, a record 107 traffic deaths were recorded in Milwaukee County.

Kessel said many cars travel too fast near her home.

"We don't have children, so I think it’s less of a concern, but Brady Street and the surrounding streets, I think speed bumps and certain things like that could help with a lot of the traffic problems that we’re seeing too," Kessel said.

Brostoff said he’d be in favor of pedestrianizing Brady Street at some point, not allowing cars to drive on the busy street.

"Certainly, it could save a lot of lives," he said.