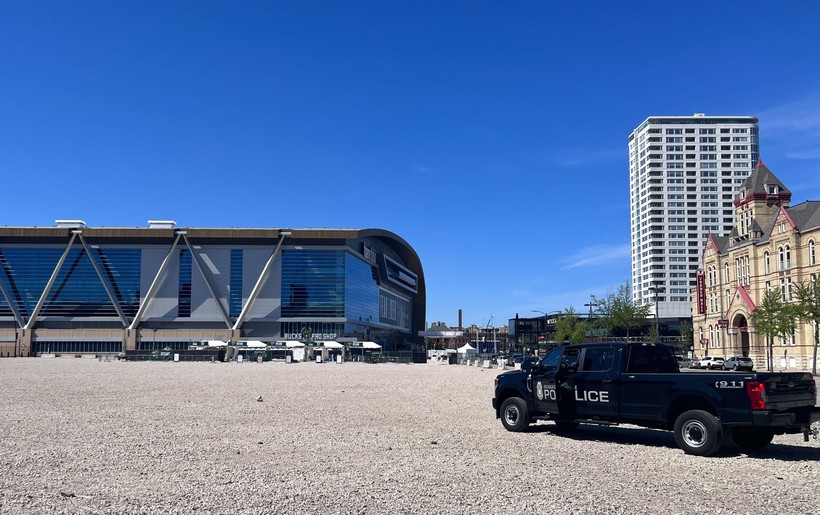 Milwaukee Mayor Cavalier Johnson announced a curfew after three separate shootings left 21 injured in Milwaukee on May 13, 2022. Johnson said during a press conference the day after the shootings that there would be additional law enforcement in the area, including police from other agencies.  Deneen Smith/WPR

Twenty-one people were injured Friday night in three separate shootings near the crowded Deer District after the Milwaukee Bucks playoff game, with one shooting apparently occurring among heavy police presence in a confrontation between two groups of people, police said.

The shootings occurred as thousands of people were in the downtown area surrounding the Fiserv Forum for celebrations around the game. All of the victims are expected to survive.

In response to the violence, Milwaukee Mayor Cavalier Johnson on Saturday declared a "limited emergency order" that a curfew will be imposed from 11 p.m. to 5:30 a.m. in the entertainment district for Saturday and Sunday nights for those younger than 21. Citations will be issued to those found in violation.

Johnson also said there will be additional law enforcement in the area, including police from other agencies.

For the city of Milwaukee, which has been plagued by gun violence in recent years, the shootings near the heart of the Deer District — a gathering space for Bucks fans and a cornerstone of the city’s developing downtown — is a blow. 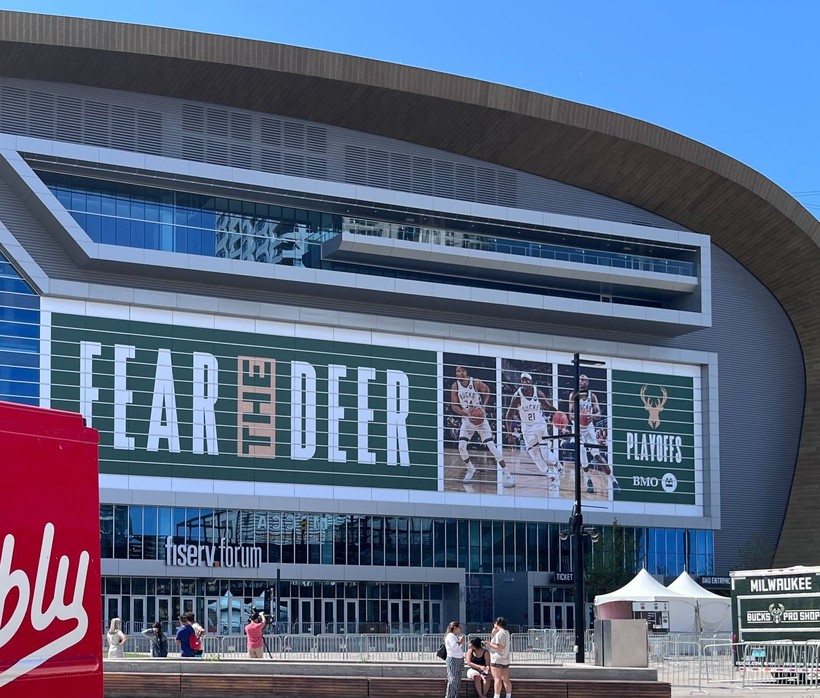 Three shootings near Milwaukee's Deer District on Friday that occurred after the playoff game between the Bucks and Celtics injured 21 people and led Milwaukee Mayor Cavalier Johnson to impose a curfew Saturday and Sunday beginning at 11 p.m. Deneen Smith/WPR

The first shooting occurred about a block from the stadium left three people injured, the sound of the gunfire sending hundreds of people in the crowded district running from the scene. In a press conference Saturday, Nicole Waldner, assistant police chief for the Milwaukee Police Department, said the shooting occurred at 9:10 p.m. on North Martin Luther King Drive. A 19-year-old man was taken into custody, she said. Two adult men and a 16-year-old girl were wounded.

At about 10:30 p.m. a second shooting occurred on North Water Street, where a 20-year-old man was injured according to police. No one has been taken into custody.

About a half hour later, at 11:09 p.m. on North Water Street, a dispute between two groups exploded into gunfire, leaving 17 people injured. Those shot range in age from 15 to 47, according to police. Five of the injured were armed and among the 10 people taken into custody. Ten guns were recovered.

The entertainment district affected by the curfew is: Vel Phillips Avenue on the west, Broadway on the east, Knapp/McKinley on north and State Street on the south.

"We will take the steps to make sure that downtown and our neighborhoods are safe," Johnson said.

The Bucks canceled a watch party planned for Sunday's game 7, which is estimated to have drawn more than 10,000 people to the Deer District, ESPN reported Saturday afternoon.

ESPN said the team canceled the event "after consultation with the city and public safety agencies," citing a text from a spokesman for Johnson.

On the sunny Saturday afternoon after the shooting, visible signs of the chaos and violence from the night before seemed to have all but cleared. Some people in the street where the most violent shooting occurred were pre-gaming ahead of a Kenny Chesney concert at American Family Field.

Bars, and their sidewalk dining areas, were filled, and some people sat in the Deer District eating and drinking at the restaurants and breweries across from the stadium. 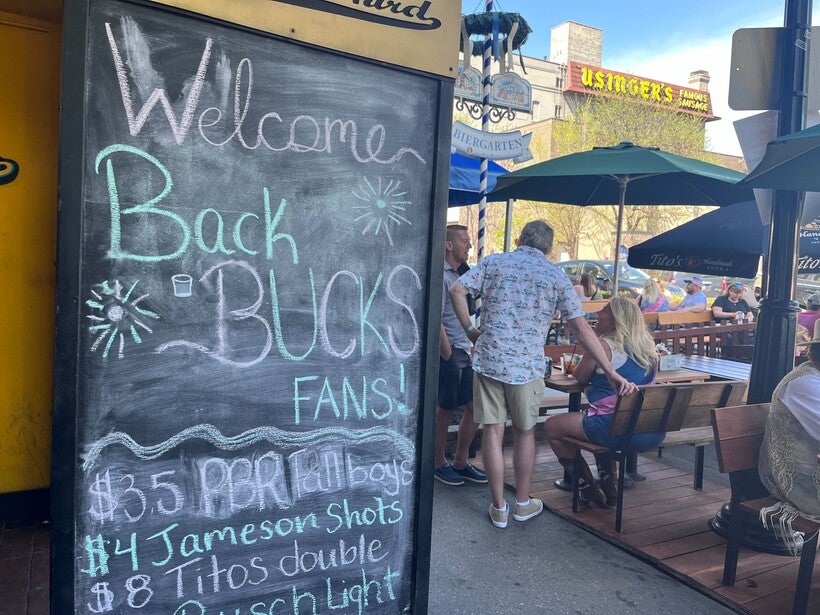 Bars and restaurants in the Deer District were busy a day after three shootings in that area injured 21 people. Deneen Smith/WPR

It was in the Deer District that 25-year-old Anna Worman, from Milwaukee's Bay View neighborhood, was reflecting on Friday night while sitting outside, drinking beer and visiting with a friend from out of town. She said she comes to the area often to meet friends but thought twice about visiting after news of the shootings.

"Would I come here tonight? No," she said. She said she wasn't sure if she would come to the district at night again.

"I would question it. It will always be in the back of my mind," she said. "This is supposed to be a safe space. This was all just redone, and it's beautiful. But having something like that happen makes me scared."

At the press conference early Saturday afternoon, Waldner sounded nearly incredulous as she spoke about the shooting. She said multiple people were firing weapons on the crowded street despite a massive police presence nearby from the earlier shooting on North Water Street.

"It appeared that in that last incident there were a couple groups that were exchanging gunfire despite the incredible amount of police presence that was downtown," she said. "District 1 officers reported hearing bullets whizzing past their heads when they were there."

She said the fact that one of the shootings occurred with police so close "goes toward respecting human life."

"There's a lack of consciousness that is really hard to police right now," she said. "It's a community problem."

Police are investigating all three shootings.

"None of them at this point honestly seem to be connected,” she said of the shootings. "There is just open carrying of firearms, with utter disregard for every single person that was just down there to have a good time and enjoy Water Street."

She said specifics about the motivations for each were either not yet known or shared with reporters Saturday.

"I know you all want to know what this is about, and I’m going to be honest we are not there yet," Waldner told reporters.

In the press conference Saturday, Johnson said the vast majority of people came to the district to enjoy the atmosphere of the Milwaukee Bucks taking on the Celtics in the NBA's Eastern Conference semifinals.

"There were a small number of people who were not coming down here with those intentions, who wanted to cause destruction in our city. That can't stand," he said, adding that those who cause harm and destruction in Milwaukee should be held "fully accountable."

"Before somebody gets to the point where they have a gun, and they're upset, and their tempers go off, and they decide to shoot in a crowd full of people, you've gotta think about whether or not those folks should have access to a gun in the first place," he said. "I don't think it's crazy to say that those people should not. They obviously don't have the responsibility to wield the weapon."

U.S. Rep. Gwen Moore, D-Wis., tweeted about the incident Saturday morning, saying "enough is enough" when it comes to gun violence in the Milwaukee community.

My heart hurts to hear of another instance of gun violence in our community. How much more are our residents supposed to take? Enough is enough. (1/3)https://t.co/hETNefpCi1

After thanking police and first-responders on Twitter for their help in aiding those injured, she then used the platform to address gun reform.

"I stand in strong support of gun safety reforms and investments in Milwaukee that promote safety, peace, and healing," she wrote.