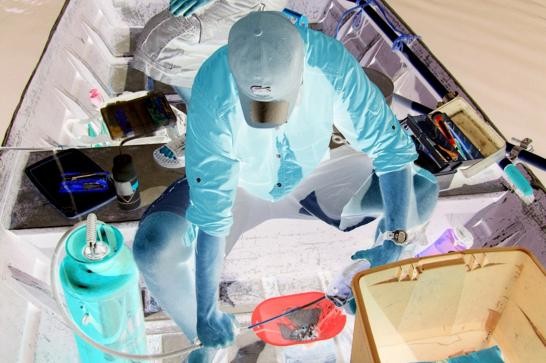 A curtain is literally rising on Little Rock Lake, as a nearly 30-year research effort into air and water pollution there is winding down.

When scientists from the University of Wisconsin, Department of Natural Resources, and other agencies lowered a plastic curtain into a pristine hourglass-shaped lake in the Northern Highland American Legion State Forest in 1984, it drew national attention. The barrier blocked water and effectively split Little Rock Lake into two basins.

To simulate the acid rain that fell over parts of the United States, research boats sprayed acid into one of the basins. The other basin was largely left undisturbed as a natural monitor of the changing environment.

This week, the DNR announced that the long-term research project will come to an end on July 29, when the plastic curtain is removed. Researchers say they learned a lot over the last 30 years. The UW's Tim Kratz says during the six years of acidification, some troubling things were found.

"The largemouth bass in the lake were unable to reproduce during the time of maximum acidification," says Kratz. "There were large algal maps that occurred on the bottom of the lake, and the plankton community changed dramatically."

Kratz says most of the effects confirmed what other researchers had found comparing different types of lakes. He says after the acid dumping stopped, Little Rock Lake eventually recovered chemically.

Scientists were also making other discoveries at the Vilas County site. The DNR's Carl Watras says that a few years into the acidification, it became clear that mercury concentrations in small fish were going up. Most of the mercury was coming from the burning of coal. Watras and others found that as the lake became more acidic, a toxic form of the mercury accumulated more in fish species.

Watras says he hopes a Wisconsin mercury rule passed a few years ago will also succeed in better protecting fish and the people and critters that eat them.

Kratz says there's at least one more project at Little Rock Lake that's made a difference: in one basin, they removed trees that had fallen into shallow water and assessed how fish reacted. The results: the yellow perch population decreased, largemouth bass grew more slowly, and the diets of the fish shifted.

Despite the beneficial findings from Little Rock Lake, Watras is concerned about one thing: lower water levels in northern lakes caused by decreased precipitation from climate change. Watras says Little Rock Lake's acid and methylmercury levels have been going back up.