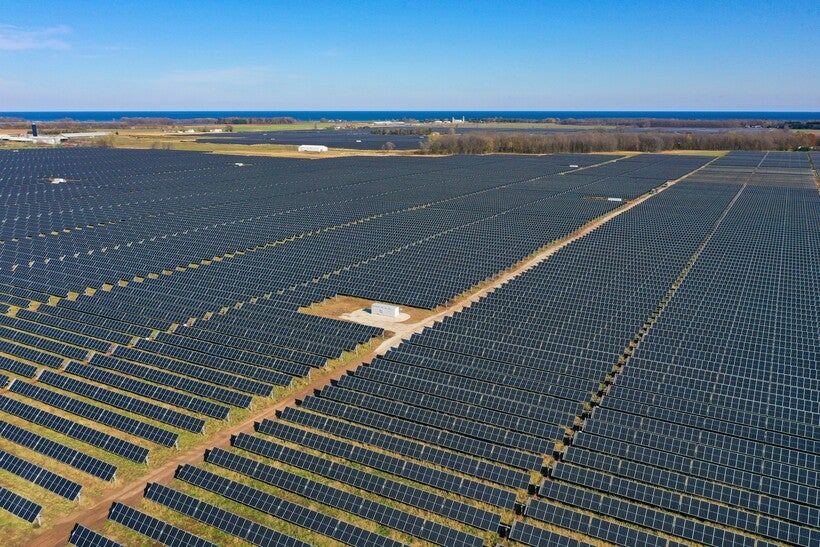 The Two Creeks solar plant in Manitowoc County went online in November. With half a million solar panels, the solar farm can provide enough power for 33,000 homes. Photo courtesy of Wisconsin Public Service

Three Wisconsin utilities are planning to buy what is slated to become the single largest renewable energy plant in the state. Utilities owned by Milwaukee-based WEC Energy Group and Madison Gas and Electric are investing $649 million in the 465-megawatt Koshkonong Solar project in Dane County.

We Energies and Wisconsin Public Service, WEC Energy Group’s largest utilities, would own 90 percent of the solar and battery storage project. Madison Gas and Electric would own the remaining 10 percent. The utilities are planning to buy the project from Chicago-based developer Invenergy, which is building the Badger Hollow and Paris Solar Farms in southern Wisconsin.

A 300-megawatt solar array would include up to 730,000 solar panels and power 90,000 homes when the sun is shining. Ninety percent would be households served by WEC Energy Group. The 165 megawatts of battery storage is anticipated to power around 50,000 homes for four hours.

If approved by the Public Service Commission, the solar array would cover roughly 2,300 acres. So far, Invenergy has acquired around 4,600 acres of land within the project’s 6,400-acre area in the towns of Christiana and Deerfield, according to an application filed with regulators.

"This project and the other recent projects that we've announced — these are meant to help MGE meet our future energy and capacity needs with cost-effective clean energy as MGE continues its ongoing transition away from coal-fired electricity and our transition to more renewable generation sources," said Steve Schultz, MGE spokesperson.

Gov. Tony Evers has set a goal for the state to produce carbon-free electricity by 2050.

Both utilities have taken steps in the last year to retire coal-fired power plants from their electricity generation mix, which includes the Columbia coal plant in Columbia County. MGE co-owns the 1,100-megawatt plant with Alliant Energy and Wisconsin Public Service.

Last November, WEC Energy Group also announced it would retire 1,800 megawatts of fossil fuel generation, including the South Oak Creek coal plant in southeastern Wisconsin. The utility anticipates ratepayers will save $1 billion over 20 years with the transition.

Conway said the Koshkonong Solar project is part of the utility’s $2 billion plan to invest in 1,500 megawatts of renewable energy that would serve Wisconsin utility customers. This is the third large-scale solar and battery project that the utilities have announced this year.

If approved by regulators, construction of the Koshkonong Solar project is expected to begin in late 2022. The utilities hope the renewable energy plant will be fully operational in 2024.

Environmental groups have hailed utilities efforts to move away from fossil fuels and save customers money while urging them to speed up the transition to cleaner energy sources. There are four remaining coal plants in Wisconsin that make up 2,766 megawatts of coal generation, according to the Sierra Club.