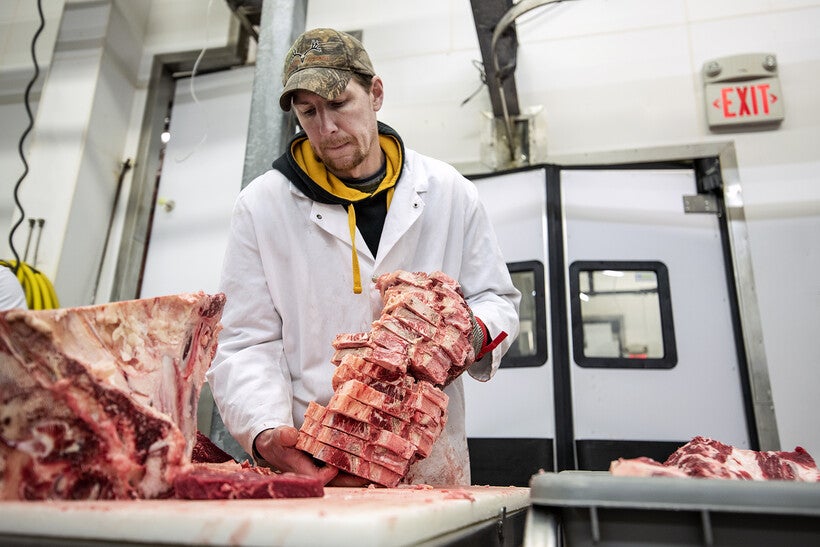 In the processing room at Sailer's Food Market and Meat Processing in Elmwood, Wisconsin, employees break down sections of beef into steaks, roasts and pieces for ground beef.

Jake Sailer is the fourth generation of his family to run the business, taking meat from slaughter to airtight packages of raw and ready-to-eat products that are custom-ordered and sold out of the shop's retail store.

He estimates 95 percent of the animals he processes come from a 60-mile radius of his shop in western Wisconsin. 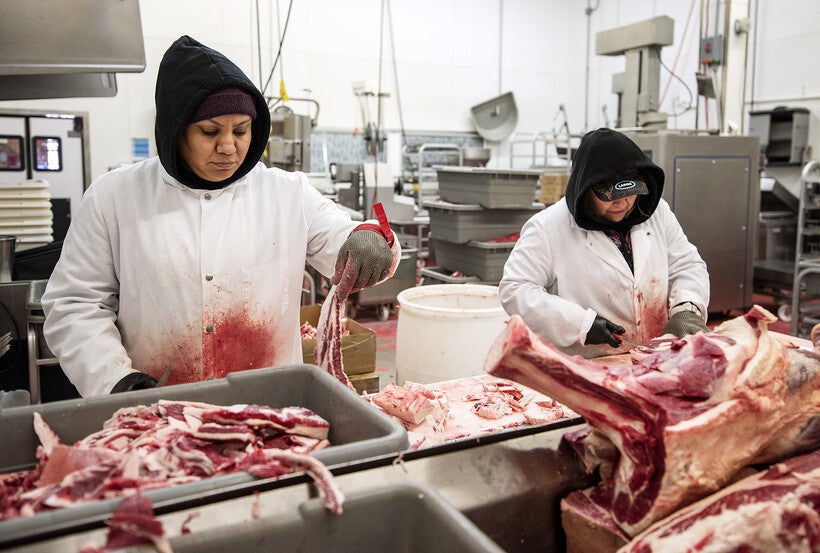 The business is always busy, Sailer said. But 2020 and the COVID-19 pandemic brought a whole new level of demand to the local meat industry, causing meat processors across Wisconsin to see record sales.

"Everybody starts panic buying, whether that was coming in and buying ground beef, smoked sausages, fresh meat, wanting to get animals slaughtered. And it just kind of went off the charts," Sailer said.

Last spring, the meat processing industry made headlines when some of the largest packing plants in Wisconsin and across the country were forced to shut down as COVID-19 spread among their employees.

But according to Jeff Sindelar, meat specialist for the University of Wisconsin-Madison Division of Extension, higher meat prices and empty store shelves weren't simply due to problems with production. Just like toilet paper and hand sanitizer, consumers who don't normally buy ahead were stockpiling meat in their home freezers. 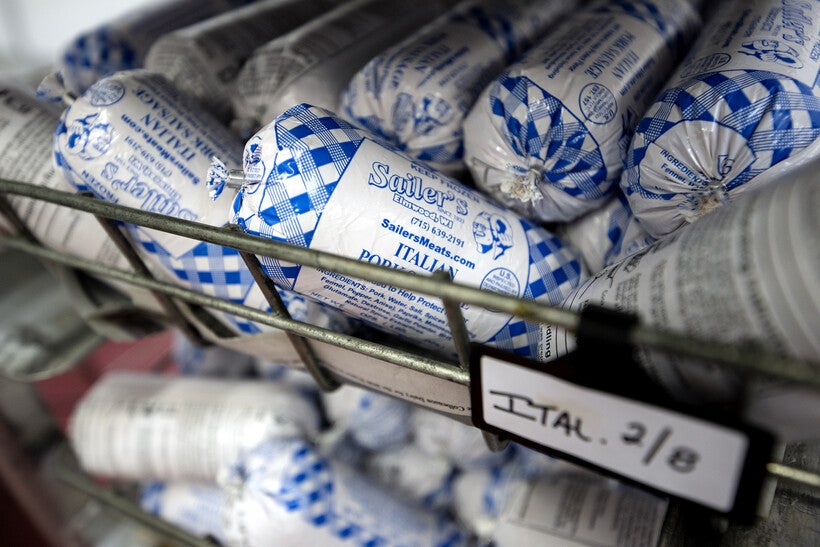 "When product availability was exhausted or becoming exhausted in supermarkets and grocery stores, some or many consumers turned to other avenues and discovered small processors," Sindelar said. "Those (new customers) have become important for overall gross sales for small businesses, and it definitely contributed to many having historic or record years for production."

Sailer said many of his new customers during the pandemic wanted to buy directly from farmers who were struggling after large plants shut down. His company ended up butchering animals that were meant for much larger Smithfield and JBS plants, which were temporarily closed.

He said his new customers stuck around even after the large plants reopened. From April to November last year, his beef sales alone were up 199 percent.

"I feel that a lot of these people realized that all your meat doesn't come from the grocery store; it actually comes from the farmer," Sailer said. "There weren't enough of us to fulfill the needs of the consumer who wanted to support the farmer. So that's where the bottleneck came from."

Even today, he said, his company is booked out 24 months in advance for beef slaughters. In some cases, Sailer said, that means farmers are booking slaughter appointments before animals are even born. 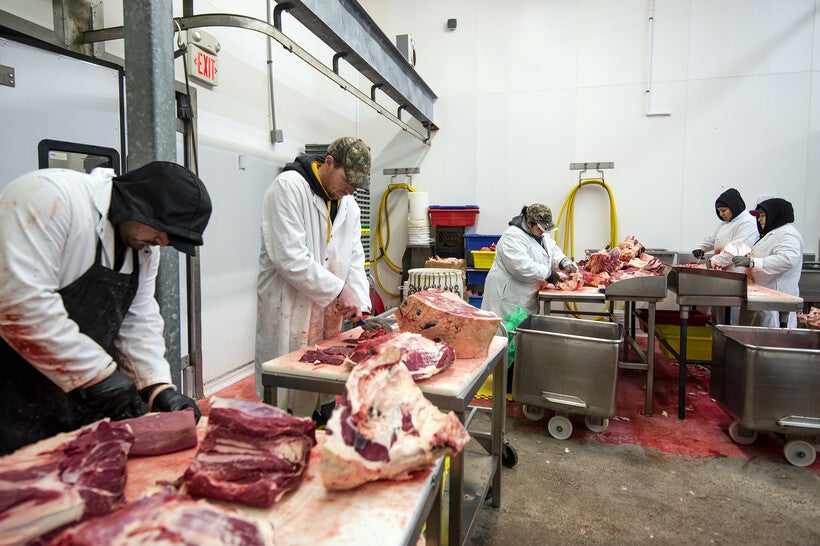 Sailer and his employees are tired after working at this non-stop pace for almost a year. He's been looking into expanding his butchering hours and bringing on new staff to help meet the demand. But growing his business is not as simple as creating a new shift.

During a visit in early February, a rail running along the ceiling Sailer's large cooler room was already packed with cow carcasses hanging from hooks, waiting to be broken down.

"You can see how we are literally at capacity with just being able to move them on this main rail. If we had more room, obviously we would be able to butcher more," Sailer said. "But butchering more means more labor and more freezer space and everything, which would bottleneck in this facility very, very quickly."

This is a common problem for local processors and one of the industry's weaknesses that was exposed during the pandemic, said Sindelar, the UW-Madison meat specialist.

"There are many establishments in the state of Wisconsin that are getting old, are outdated or simply aren't large enough in their current form to meet normal demands, let alone the exaggerated demands that occurred back in 2020," Sindelar said. 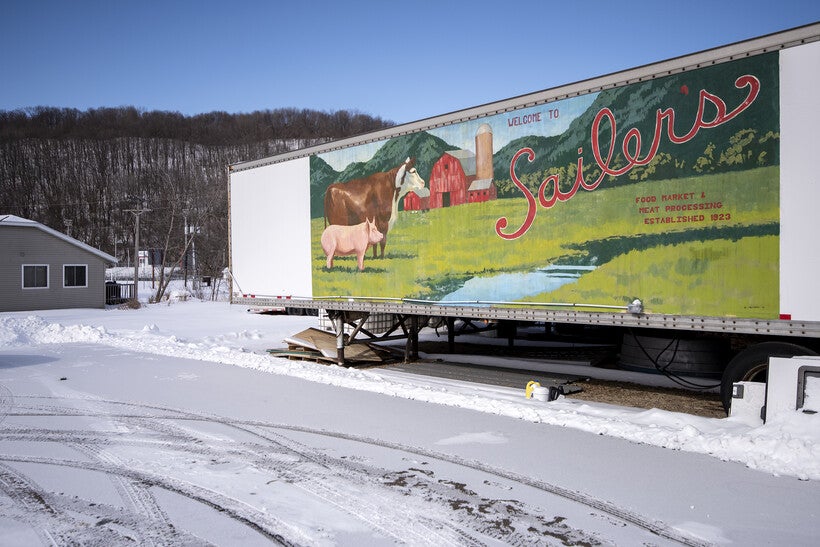 A painted trailer outside of Sailer's Food Market and Meat Processing in Elmwood, Wis., on Monday, Feb. 8, 2021. Angela Major/WPR

He said even more pressing is the shortage of workers that has affected not only small processors but also large packing plants across the country.

"COVID really allowed many people to realize just how significant that was and what happens when there is an occurrence such as a pandemic that really puts demand and pressure on an industry which is already short-staffed," Sindelar said.

Sindelar said these preexisting problems are the biggest hurdles for small businesses looking to turn the demand surge they saw in 2020 into something permanent.

He said local processors run the risk of losing their new customers if they can't keep up the current pace. He believes the industry needs state support to expand their capacity and labor pool.

That support could come in the next state budget.

Gov. Tony Evers has already proposed a new state grant program for local processors and new money for workforce development in his budget. The ideas have gained wide support from groups like the Wisconsin Farm Bureau and the Wisconsin Farmers Union.

Sailer said the funding would mean a lot for producers like him. While his business has a long history of success, Sailer said newer processing businesses can have a hard time getting banks on board to lend them money for an expansion.

"I believe that once they do this, and they support the farmer, they get what they want and everything turns out great, that they'll always be a repeat customer," Sailer said. "I think it's a great thing, you just have to be able to get it done for them."