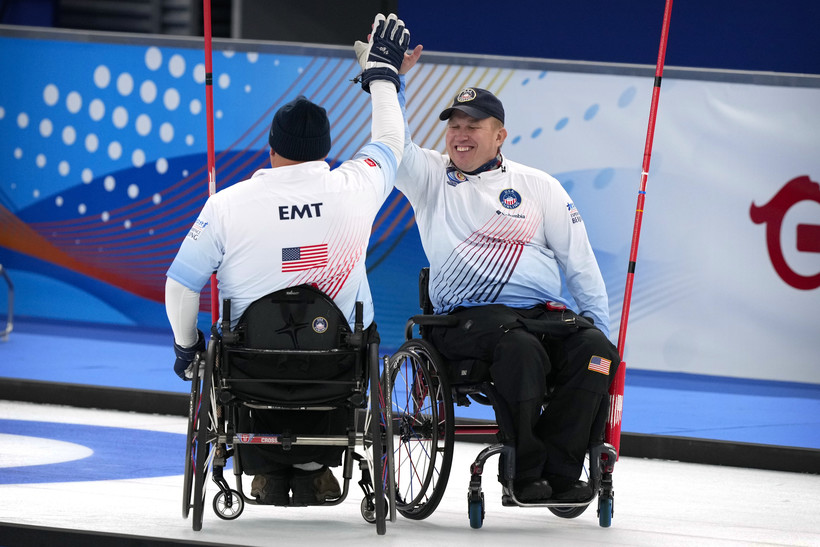 Stephen Emt, left, and Matthew Thums of the United States react after defeating Canada in their semifinal match at the World Wheelchair Curling Championship, a test event for the 2022 Winter Olympics, held at the Beijing National Aquatics Center, also known as the Water Cube, in Beijing, Friday, Oct. 29, 2021. AP Photo/Mark Schiefelbein

Players hope to keep the 'spirit of curling' strong and 'bring home some hardware'
By Diane Bezucha
Share:

Two more athletes will represent the Badger State in Beijing, this time for the 2022 Paralympic Winter Games. Weston resident Matthew Thums and Suamico resident David Samsa are both competing as members of the wheelchair curling team.

The Games kick off on Friday. Thums said he is feeling pretty confident.

Thums is the team skip and Samsa throws second. Both are first-time Paraympians, but have spent years developing their talent and passion for curling.

It all started about 10 years ago for Thums. He was looking for a way to pass the cold Wisconsin winters when he saw an ad for a "Learn to Curl" event at the Wausau Curling Center. He showed up on a Saturday, watched YouTube videos to fine tune his throw, and by Monday, he was playing on a league team.

The following spring, he attended the U.S. team pre-trials in Janesville. He said seeing the elite players and coaches shifted something for him.

"That's where the passion and the drive to become a Paralympian kind of started," Thums said.

He spent the next several years figuring out his technique and getting consistent with it. He heard that to be really good, you have to throw at least 30,000 stones — about a game a day for five years — which Thums said he surpassed long ago. 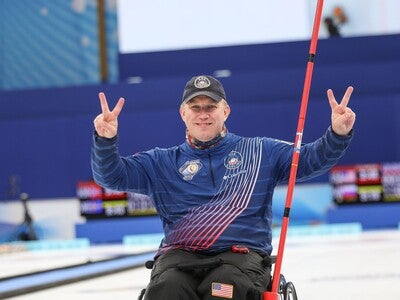 "I'm a full-time curler and a part-time estimator," said Thums, who works in accounting for a residential building company when he’s not traveling for competition.

For Samsa, it was the strategy of curling that got him hooked.

"It's like chess on ice," Samsa said. "Everybody can throw the perfect stone but if we're not making ... the right call, you're gonna have a tough time winning, even if you make every shot."

He was part of an all-wheelchair trapshooting team when he was recruited to try curling at the Green Bay Curling Center. He quickly fell in love with what he calls "the spirit of curling."

"The team that you play — win or lose — after the game, you guys get together at the same table and you just talk and enjoy yourself," Samsa said.

And he feels it's a sport where wheelchair users can compete on a level playing field.

"You can take on an able body and give them a good run for their money," Samsa said. "Can’t take them on the football field, but you bring them out on the ice and you better hang on, I'm going to come after you."

For the most part, Olympic and Paralympic curling are played and scored in the same way. But in wheelchair curling, there are eight ends instead of 10, and players can use their hands or a delivery stick to throw the stone. They also compete on mixed gender teams in which players take turns stabilizing each other’s chair during play. And there is no sweeping in wheelchair curling, so a player’s strength and aim has to be even better.

Curling was first added to the Paralympic games in 2006. Since then, the top of the podium has been dominated by Russia, Canada and Norway. The United States has never medaled in Paralympic curling. But Thums and Samsa are hoping to change that in Beijing.

"I thought at one time, there's no way I'm going to be able to compete against these people and I am right in the thick of it right now," Samsa said. "It's kind of surreal, you know. It's like wow, I guess I made it." 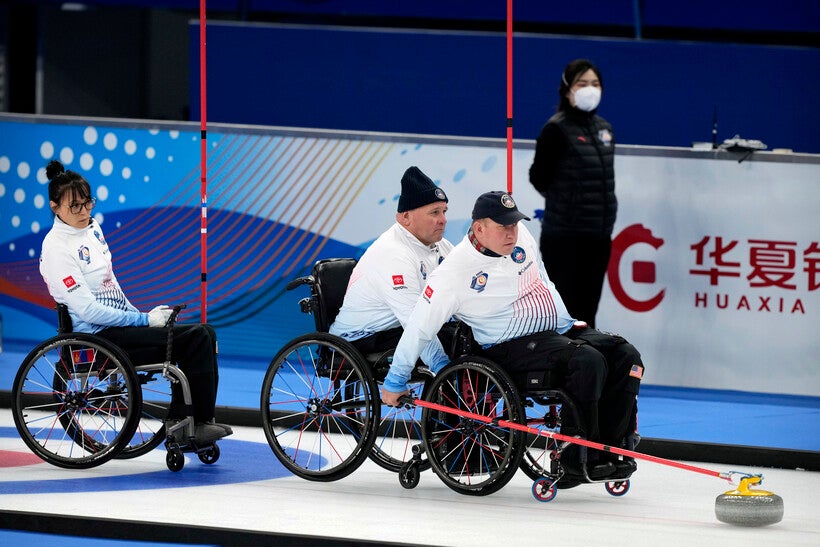 From left, Batoyun Uranchimeg, David Samsa, and Matthew Thums of the United States compete during their semifinal match against Canada at the World Wheelchair Curling Championship, a test event for the 2022 Winter Olympics, held at the Beijing National Aquatics Center, also known as the Water Cube, in Beijing, Friday, Oct. 29, 2021. AP Photo/Mark Schiefelbein

'It's a pretty cool honor'

If you ask Thums or Samsa, they will tell you they’re not the least bit nervous. In fact, they’ve played and even beat most of the other Paralympic teams at some point in the past four years.

After briefly dropping down to the B-level competitions in 2020 — what Thums calls the minor league of curling — Team USA has clawed its way back toward the top.

With so many national team camps and competitions canceled during COVID-19, the team hasn’t had as much time to practice together as they would like. Thums practices in Wausau, Samsa in Green Bay and their teammates hail from Colorado, Minnesota and Massachusetts.

But over the summer, they met twice a week on Zoom to work on strategy.

At the 2021 World Wheelchair Curling Championship in October, Team USA narrowly lost the bronze medal to Russia. So they’re coming to Beijing hungry.

He has a large family cheering for him in Wisconsin — five siblings and 15 nieces and nephews.

"I expect them to be watching the midnight games," he added, laughing.

Samsa said his wife of 28 years and two grown children have always been his biggest champions.

And at the end of the day, they’re just hoping to make their families, country and Wisconsin proud.

Thums agreed, saying "I'll go over and do the best of my abilities and bring home some hardware."

Team USA's first game will take place Saturday at 12:35 a.m. against Slovakia. All games will be broadcast live on NBC, and aired again during primetime and streamed on Peacock.