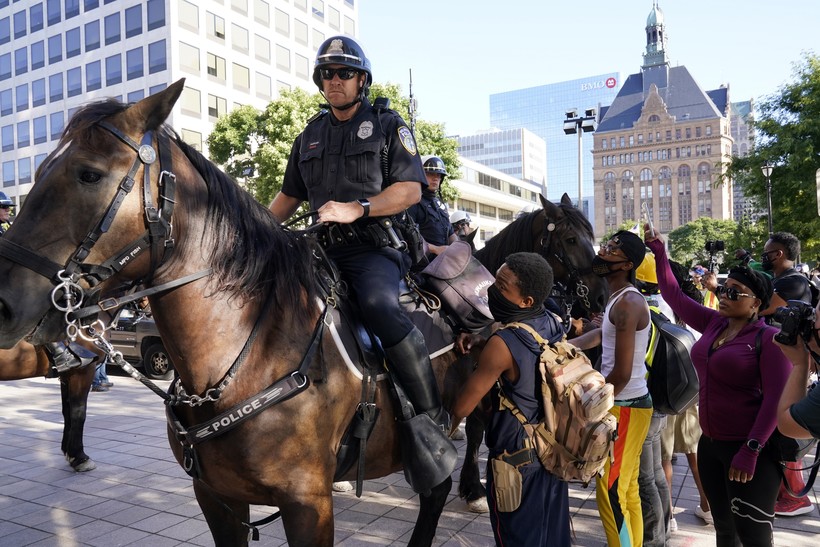 Police on horseback block demonstrators at a protest outside the site of the Democratic National Convention Thursday, Aug. 20, 2020, in Milwaukee. Morry Gosh/AP Photo

Milwaukee would lose 120 police officers next year under Mayor Tom Barrett's proposed budget, which he introduced to the city's Common Council on Tuesday.

The positions would be lost through attrition and by not holding new police academy classes next year. Barrett said the only new recruits would be 30 officers funded by a federal grant.

Despite the cuts, the Police Department budget will remain virtually the same as this year, at about $300 million. That’s because the savings from the 120 officers has been spent on increased costs for salaries, health care and other personnel-related costs, Barrett said.

"What makes this challenging is some individuals will want to see even deeper cuts (to the Police Department), but according to labor contracts, the last hired are the first fired," Barrett said. "Those (recruits) would be the ones let go, so we couldn’t accept the federal funding."

Under the budget proposal, Milwaukee would have about 1,680 sworn officers by the end of 2021, about 200 fewer than four years ago.

The latest cut comes one year after the department lost 60 officers, and as activists across the country are calling for police departments to be defunded. While proposals have varied, "defunding police" generally means shifting funding from police departments — which typically consume the largest portion of a city's budget — to boost social programs.

In Milwaukee, the Police Department budget has exceeded the entire tax levy of the city for five consecutive years.

Barrett’s budget removes 911 operators and dispatchers from the Police Department and consolidates them, along with Fire Department dispatchers, into a new division in the Fire and Police Commission.

Doing so will be more cost effective and provide shorter wait times, Barrett said. It also means civilians, not sworn officers, will be hired.

"We have to find ways to civilianize more positions, putting sworn officers on the street rather than overseeing 911 dispatchers," Barrett said. "There are other important aspects of the Police Department that warrant change. I am concerned about the level of militarization. I want training to be modernized. I want a dramatic improvement in the department’s relationship with the community."

In a statement, the Milwaukee Police Department said the proposed budget cut would undoubtedly impact its operations.

"We remain committed to working and engaging with our community, elected officials and public safety partners to ensure that all of our neighborhoods are safe, vibrant and livable," the department said.

Barrett said he knows the proposed budget will be very controversial, but that the city has an obligation to do what it can with the resources it has.

"The budget is a reflection of the ongoing challenges Milwaukee has had in working with the state Legislature," Barret said.

The state has not increased shared revenue to Milwaukee in 18 years. During this time, state revenue has increased 61 percent, Barrett said.

Democratic lawmakers introduced a bill in fall 2019 that would have allowed Milwaukee County municipalities to put a binding referendum on their April 2020 ballots asking voters to increase the local sales tax by 1 percent in exchange for property tax relief, but the bill stalled in the state Legislature.

"We knew that this was going to be a challenging budget," Barrett said. "What we didn’t know was that we were also going to be facing COVID-19, an economic tsunami, the fight for racial justice. And those issues just made a very, very difficult budget much more difficult."

Barrett’s proposed budget includes $6.5 million to promote housing and homeownership. The money will come from funds generated by a high-end residential development in downtown Milwaukee.

Barrett said part of the effort will be to "support new homeowners with a down payment supplement — including new homeowners who have been at a disadvantage because of long-standing racial and economic inequities." As many as 200 residents could receive support that will allow them to become homeowners, he said.

"Home ownership is a traditional path to build wealth and economic stability and will be a welcome addition in many Milwaukee neighborhoods," Barrett said.

The budget will be sent to the city's finance committee. It will be voted on by the full council in November.