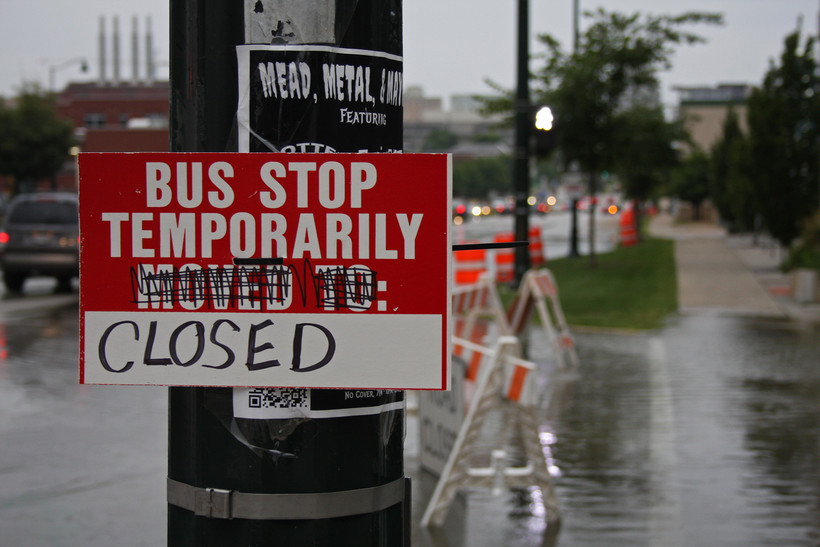 Madison Metro Transit has had to close bus stops and reroute bus routes due to flooding. Jenny Peek/WPR

Despite decreasing water levels, city of Madison officials are still asking people to be vigilant in preparing for more flooding.

On Monday afternoon, city officials said the water on Lake Monona is down half an inch, but flooding is still possible with more rain in the immediate forecast.

"While we did not get excessive amounts of rain yesterday and last night, weather conditions continue to be unstable. Flash flooding continues to be a concern," a city of Madison press release read Monday afternoon.

On Monday, more Madison homes were added to a list of residences at risk of flash flooding.

Bryan Johnson, with the Madison Streets Division, said 1,200 homes in the Starkweather Creek area were added to the flash flood risk areas. Last week, Madison Mayor Paul Soglin said city workers were placing warnings on the doors of 1,700 homes notifying people that they were in danger of being flooded.

The city of Madison tweeted that city crews will be distributing flyers to those homeowners containing information about flooding risks.

Updated maps show new risk areas for flash flooding during an intense rainstorm. Approximately 1,200 homes have been added to the flash flood risk areas. Flyers will be distributed to these homes on Monday, August 27. View updated maps here: https://t.co/uhWpv0DveH

WISC-TV reported that officials said the added houses are near storm drains that empty into lakes and pose a concern for flash flooding in severe weather.

Previous flood risk maps highlighted neighborhoods with storm drains that empty into the Yahara River, but as the flooding continues, additional areas have become areas of concern.

Dane County Lakes staff has been working to mitigate additional flooding before the anticipated rain. Over the weekend, staff used 10 lake weed harvesters to remove more than 270 loads of aquatic plants. By doing this, the flow of water leaving the Yahara Chain has doubled, meaning more water is leaving than entering. Because of this, Lake Monona crested Sunday and is "slowly" going down Monday, according to the Monday afternoon press release.

The National Weather Service is predicting about another inch of rain through Tuesday night in parts of Dane County, and local officials continue to monitor the lakes and flooded areas closely. Meanwhile, the Wisconsin National Guard is continuing to help with sandbagging efforts.

The flooding comes after torrential storms last Monday and early Tuesday dumped more than 11 inches of rain in some areas of Madison and Dane County. The water caused widespread flooding. One man died after being caught in a vehicle on Madison's west side.

Following the deluge of rain, local officials and Madison residents have been focusing on the city's near east side, particularly near the chain of Yahara Lakes and Madison's Isthmus, after the rain led to rising lake levels and overwhelmed the storm water systems. Major roadways have been closed and some residents are taking steps to protect their homes because of the rising water levels by filling sandbags and surrounding their property.

Last week, city officials were preparing for the potential closing of East Washington Avenue, a main artery for Madison, but only parts of the street were closed. As of Monday morning, the city reopened the inbound and outbound lanes. The city also opened other closed roads Monday morning, while others remain closed.

Dane County officials released a statement Sunday afternoon that identified several positive improvements, including improved water flow in some areas, the opening of one area roadway and the closing of one Red Cross shelter in Mazomanie.

As of last Friday, the initial damage assessment in Madison and the surrounding county was $108 million. Officials say damage to public infrastructure totals $38 million. Outlying municipalities including Mazomanie, Black Earth and Cross Plains were hardest hit.

County officials said Sunday that the United Way's 211 reported receiving more than 1,200 individual reports of private property damage. They urged residents to report damage as soon as possible and that reporting is available by phone or online.

City staff and volunteers have distributed 160,000 sandbags since last week, and 10,000 were distributed Monday morning, according to the city release.

Parking requirements for street sweeping have been suspended, and people with street parking permits will see increased flexibility until further notice. Parking tickets will not be issued and city parking ramps will be offering free parking from 9 p.m. until 7 a.m. through Aug. 31. Madison Metro Transit continued to offer free bus service for all city routes to minimize auto use Monday, regular fares will resume Tuesday.

Last week, Gov. Scott Walker declared a state of emergency in the county.

Another drenching storm has dumped more than 7 inches of rain on parts of Ozaukee and Washington counties early Monday morning.

The storm downed trees and caused flooding that closed Interstate 43 in Ozaukee County. Several vehicles were stranded in high water on I-43 near Port Washington.