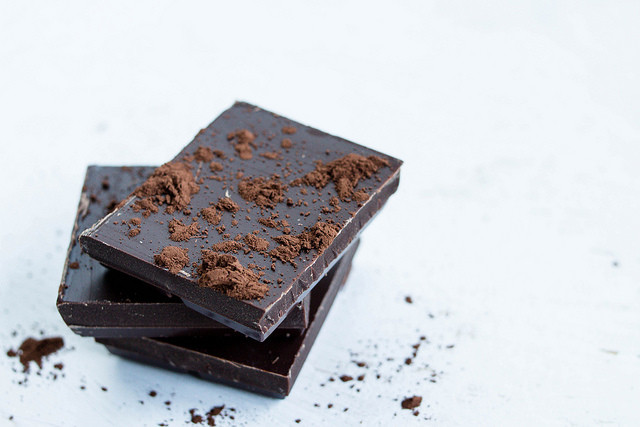 Zorba Paster: The Wonders of Chocolate

Chocolate Once A Week May Reduce Risk For Atrial Fibrillation
By Dr. Zorba Paster
Share:

The Puritan motto, "He who suffers conquers," is something that still pervades our ideas, especially our ideas of good health. How could something that tastes so wonderful be good for you?

A few years ago, I was helping to lead a Wisconsin Public Radio tour to the south of France and Spain. I know, I know. It was hard work but somebody had to do it. Uh, huh.

While we were feasting on delicious Mediterranean food, one of my fellow travelers turned to me saying, "If my doctor saw what I was eating, he’d be really upset. My wife watches me like a hawk." (She was, by the way, sitting next to him smiling.)

Even though I told him he was eating right, that the Mediterranean diet is the best diet and the old-fashioned American Heart Association cardboard diet was to be tossed out, he didn’t buy it. You have to give up taste to eat right, or so he thought.

He was wrong. Dead wrong. He was right that we have to eat differently than we have in the past, but you don’t have to suffer. Some things that are good for you also taste good. Enter chocolate.

New research in the British Medical Journal’s Heart publication showed eating chocolate once or twice a week may lower your risk of developing atrial fibrillation, an abnormal heart rhythm that affects 3 million to 5 million people in the United States. AFib reduces cardiac output, making it harder to exercise, and increases the risk of stroke dramatically — five times what your normal risk is. That’s a ton.

Anything that reduces the chances of developing AFib is worth considering. If I told you I had a supplement that reduced this risk by 20 percent, I’d make a ton of money. Well, guys, start buying stock in chocolate companies — because that’s how much eating chocolate reduces that risk.

Researchers went to Denmark, where a landmark 55,000-people-strong longitudinal study is still going on. They don’t consume quite as much chocolate as Switzerland, which is tops when it comes to eating chocolate. The Danes are more like us, consuming a per-person average of about 22 pounds a year.

Part of the study is following what they eat — fats, carbs, fruit, veggies and chocolate. Then they control for exercise, smoking, education, income and lifestyle issues.

Looking at 15 years of research, they found if you had chocolate once or twice a week, you reduced your risk of getting atrial fibrillation by 20 percent. And the chocolate the Danes eat is milk chocolate, the kind you find in plain old run-of-the mill chocolate bars, not the fancy chocolate that costs more (milk chocolate is 30 percent cocoa, while dark chocolate is 70 percent).

Now, I know those Puritan naysayers will say, "Encourage chocolate and you’re encouraging obesity. Don’t do that, doctor. It’s bad news." They’ll say the flavonoids and antioxidants you get in chocolate can be taken in a pill that doesn’t have calories. That’s better for you. Really?

My spin: Break out a bar of chocolate once or twice a week. Maybe have it with your red wine and your delicious Mediterranean food, and you’ll be eating right. But that’s no excuse not to exercise. And cut down on those brats. Stay well.