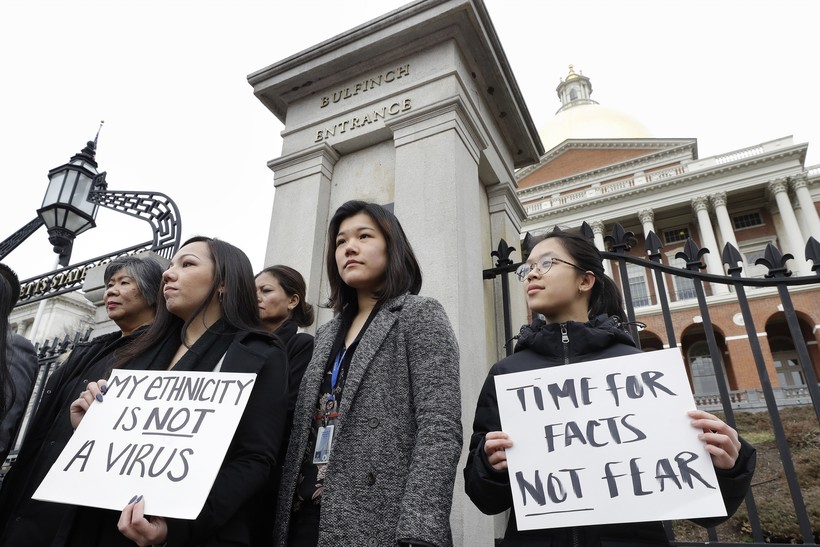 Jessica Wong, of Fall River, Mass., front left, Jenny Chiang, of Medford, Mass., center, and Sheila Vo, of Boston, from the state's Asian American Commission, stand together during a protest, Thursday, March 12, 2020, on the steps of the Statehouse in Boston. Asian American leaders in Massachusetts condemned what they say is racism, fear-mongering and misinformation aimed at Asian communities amid the widening coronavirus pandemic that originated in China. Steven Senne/AP Photo

As Xenophobic Attacks Increase In Wisconsin, Officials And Advocates Respond

Wisconsinites Of Asian Descent Say They're Afraid In Public Amid Attacks
By Rob Mentzer and Miranda Suarez
Share:

Potential hate crimes and incidents of aggression against Asian Americans have increased amid pandemic fears, according to police, and some Wisconsinites of Asian descent say they feel like they have to be on alert when they do go out in public.

"Not so much as in fear of contagion, but because they are afraid, again, to be targets of these racist and xenophobic slurs," said Cindy I-Fen Cheng, director of the Asian American Studies Program at the University of Wisconsin-Madison, at a virtual town hall on Thursday.

The university hosted the event in response to what UW-Madison police called an increase in "bias incidents" both on campus and online against members of the community perceived to be from China, according to a statement. A post on the university's Asian American studies Facebook page showed racist messages written in chalk on campus.

Administrators assured the hundreds of meeting participants that the messages have been removed, and the university is working with police to find video footage of the incident.

Christina Olstad, the university's dean of students, expressed disgust for the chalk messages and other hateful acts.

"There have been individuals coughing in students’ faces. They have been engaging in behavior that is — it’s disgusting, it’s unacceptable, it’s racist, and I wanna call it what it is and I want us to do something about it," Olstad said. 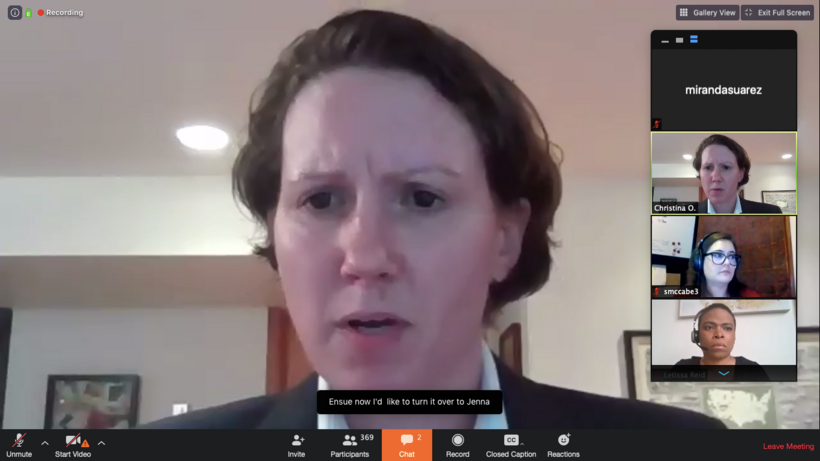 University of Wisconsin-Madison Dean of Students Christina Olstad addresses a March 26, 2020 virtual town hall meeting about racist chalk messages written on campus. The university has reported an increase in the number of bias reports involving incidents against Asian and international individuals as the COVID-19 pandemic rages. Miranda Suarez/WPR

In a statement posted online on Wednesday evening, Marathon County Sheriff Scott Parks wrote that his department and other local police agencies are investigating verbal and physical attacks and instances of vandalism believed to be motivated by fear amid the COVID-19 pandemic. Marathon County has about 8,000 Asian residents, most of whom are Hmong.

The COVID-19 virus originated in China, a fact emphasized by some political leaders, including President Donald Trump, who has repeatedly referred to the pandemic disease as "the Chinese virus."

In an interview on Thursday, Parks said in central Wisconsin there have been "intimidation confrontations, where individuals have made derogatory remarks, have stopped movement by blocking, or have gone so far as to even spit or cough on persons with the idea that the virus is being returned." Parks said there have also been reports of vandalism.

Some of these incidents have been formally reported to police and some haven't, Parks said. He declined to discuss any specific incident due to ongoing investigations. No one has been arrested in these incidents.

Parks said he intended his statement as a way of assuring the community that his department and others take the crimes seriously, as well as to encourage victims to come forward and let offenders know they will face consequences.

"We are aware that this is taking place," Parks said. "We are conducting follow-up. And if you are identified as being involved in this, our intention is to forward you for prosecution."

Mary Thao, a Wausau City Council member, declined to speak about the details of incidents in the community. She said she's grateful for the support of the Hmong and southeast Asian community from the sheriff and the Wausau Police Department, which also issued a statement denouncing racial attacks and pledging to investigate incidents.

"This is a crisis for everyone," Thao said. "This virus doesn't discriminate. It goes beyond all borders, all people, all color. And this is a time for us to really band together, so we can all get through this together."

UW-Madison's virtual town hall was interrupted twice: once when a meeting participant exposed his rear end to the camera, and again when another person interrupted a speaker to hurl racial slurs at her. Both were shut down by meeting moderators.

Administrators said the town hall was the beginning of larger efforts to help and reach out to the Asian and international community, even when they're not on campus due to COVID-19 shutdowns. The university is holding a virtual forum for Asian and Asian American faculty and staff on Friday, and shared UW-Madison's bias incident log, where the public can review incident reports and any action the university has taken on them. An international student advisory board has its first meeting scheduled for next week and plans to discuss the issue.

Reports of harassment and attacks on Asian Americans has been a national trend, including violent assaults reported in New York, Los Angeles and Midland, Texas. On Monday, Trump tweeted "It is very important that we totally protect our Asian American community in the United States. ... The spreading of the Virus is NOT their fault in any way, shape, or form."