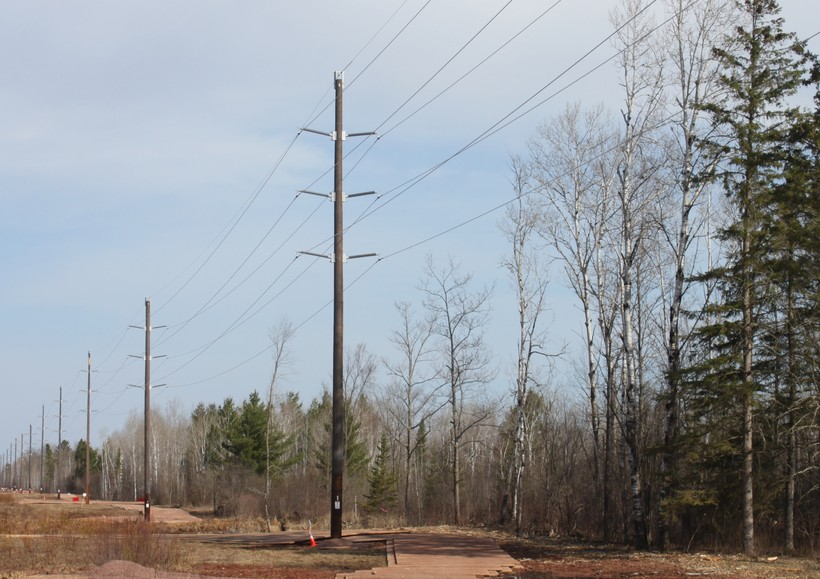 Two routes are proposed for a new transmission line on the Bayfield Peninsula. Photo courtesy of Xcel Energy

Northern State Power Company, a subsidiary of Xcel Energy, has submitted an application with the state Public Service Commission to build a new 34.5 kilovolt transmission line on the tip of northern Wisconsin. The utility company says the project is necessary to strengthen power and reliability in the area.

Currently, the company has one transmission line that provides power to the Bayfield Peninsula, but parts of the line are more than 50 years old. The utility wants to provide a second source of power and two new substations to serve the east side of the peninsula, according to Ellen Heine, the project’s lead on permitting.

"That helps address reliability concerns that are more related to outage problems, as well as voltage issues with low voltage that occurs because of the amount of load on the line as compared to the amount of power that it’s able to provide to the community at this time," said Heine.

Xcel provides power for 75 percent of the customers on the peninsula, and the company said loads on the line have increased in cities like Bayfield and Washburn since it was originally built. One substation would be built four miles west of Ashland on County Road G and another would be constructed two miles west of Bayfield on Star Route Road.

Two possible routes have been proposed for the Bayfield Second Circuit Transmission Line to meet the region’s energy needs. The east route would follow the existing roughly 19-mile transmission line and utilize a double-circuit line. The west route would span around 26 miles and mostly use a single-circuit line. Both would require temporary bypass lines to maintain power during construction.

Kim Bro, chair of the Washburn Town Plan Commission, said five towns and the cities of Bayfield and Washburn support the addition of another power source. However, he said they would prefer the project utilize the east route, which follows the existing transmission line.

"It makes a lot more sense to concentrate the impacts in one right of way rather than building a whole new right of way to add energy going from Ashland up to Bayfield," said Bro.

The Bayfield County board passed a resolution earlier this year in favor of the proposed east route, which the utility's application states would cost around $35 million. A map of the proposed east and west routes. Map courtesy of Xcel Energy

Heine said the east route would be more costly to construct — about $7 million more than the west route — due to challenges with terrain and access to the line.

"There’s a lot of that (line) that doesn’t follow existing roads, but it is a buildable line and we have figured out a way to do that," said Heine. "The cost is just one of many factors that get considered when the Public Service Commission chooses a route."

Heine said the company initially proposed a project very similar to its west route based on the challenges with constructing the east route. However, Xcel proposed two routes after receiving feedback from the community.

"They thought, 'Is it a good idea to expand the extent to which we have transmission lines going through remote parts of the county forest?'" said Bro. "In many ways, it makes sense to keep them where they’re more accessible on the eastern part of the peninsula."

However, Heine noted both routes present pros and cons with construction. Both routes would cross Whittlesey Creek National Wildlife Refuge, the South Shore Lake Superior Fish and Wildlife Area and several outstanding resource waters and trout streams. Archeological and historic resources have been identified within the proposed routes, but Xcel said the project would not impact them.

The utility would need to obtain several federal, state and local permits for the project, which is expected to take 12 to 18 months to build depending on the route. Xcel is proposing to begin construction in 2020 with a goal of having the line in service by the end of 2021.