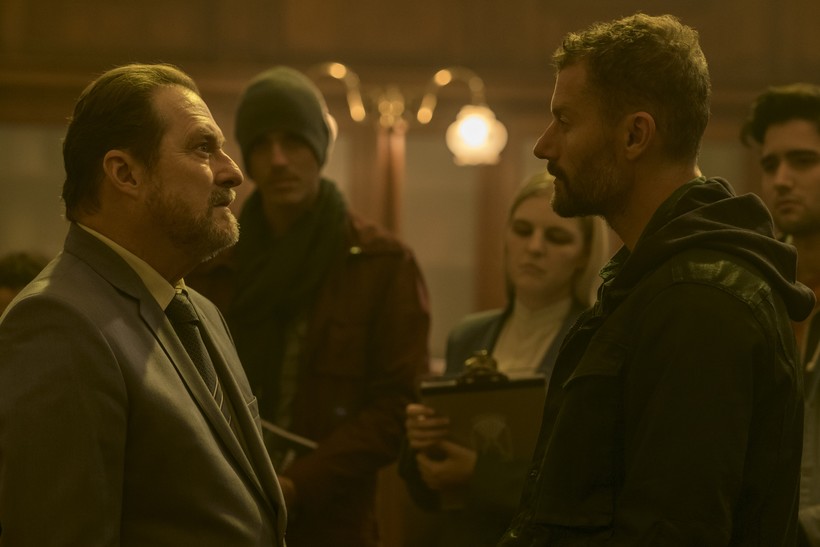 Writer, Director David Prior On The Horrors of Making 'The Empty Man'

Despite Trials And Tribulations, The Film Has Earned Great Reviews
By Doug Gordon
Share:

David Prior got his break directing DVD special features for such David Fincher films as "Zodiac" and "The Social Network." He obviously drew on that work experience in writing and directing his debut horror feature film, "The Empty Man."

"The Empty Man" focuses on an ex-detective named James Lasombra. James is grieving the deaths of his wife and son. He helps his friend Nora whose daughter has gone missing.

James's investigation leads him to a sinister organization called The Pontifex Institute, which turns out to be a cult. The film stars James Badge Dale, and chameleon-like actor Stephen Root who delivers a great performance as the cult's leader.

The movie also became embroiled in a mega media merger that delayed and botched its release. "The Empty Man" features an impending sense of dread and doom and themes of guilt, grief, the meaning of existence and mind control. Prior explains to WPR's "BETA" why he wanted to include such big ideas in his film.

"I just always liked those ideas," Prior said. "And I think part of the fun of genre is the way that it allows you to talk about deeper, serious human universal truths or ideas or common fears and things without being too precious about it. You can kind of look at it out of the corner of your eye, the way that genre allows you to literalize a metaphor and kind of come at it askance."

"So you can tell a story about guilt or greed, for example. And you can do it in a very kitchen sink sort of way where you're having characters hash out their problems and talk about their inner feelings over dinner. Or you can have a character who ends up meeting a little green-eyed monster and just kind of take the idea and shape it a little bit differently. And in a way, it can almost be kind of a spoonful of sugar that can help the medicine go down. I think it's kind of a proof against pretentiousness in some way, because you can talk about big ideas without actually presenting them as big ideas."

"He embodies the quintessential character actor, the concept of somebody who can move easily back and forth between different genres and different types of character and things. He's ridiculously funny and unbelievably menacing and really charming and capable of accessing all sides of the human animal," Prior said.

Root flew into South Africa with only about 24 hours before he was on set.

"He was completely jet-lagged, but completely prepared, an absolute pro," Prior recalled. He said that one of the most joyful moments during production was the scene between Root and Dale.

"The way that Root had, just kind of without even discussing it with me beforehand, all of the rises and falls in the dialogue where which words were stressed, which ones weren't, all of it was exactly the way I'd imagined it when I was writing it," Prior said. "And it was one of those sort of semi out-of-body experiences."

There are always obstacles to overcome during the filming of a movie, but these obstacles were more difficult than usual for Prior, his crew and cast. They spent around 50 days shooting in Capetown, South Africa. Then they moved to Chicago to wrap up the production with about a week's worth of exterior shooting. Unfortunately, Chicago got 2 feet of snow, and they had to shut down production after just a couple of days. The costumes got held up at Customs, so the Illinois wardrobe crew was scrambling, trying to figure out how to replicate the costumes.

"Then our executive at Fox, who was our lead advocate within the system, left the studio," Prior said. "We were kind of abandoned. It was an interesting thing because I think we were cheap enough that we weren't drawing enough attention, and it took them a while to replace our previous executive. And any time that happens, it's precarious. I mean, anybody who's read even the briefest overview of Terry Gilliam's career kind of knows when something like this happens. So we didn't have it as bad as '(The Adventures of) Baron Munchausen (Terry Gilliam's 1988 film) but we had, you know, we had some problems."

"The people who inherited the movie just had no vested interest in it whatsoever," Prior recalled.

By the time the trailer for "The Empty Man" was being made, Disney's acquisition of 21st Century Fox was complete. Prior didn't even see the trailer until the day before it came out. And the trailer misrepresented the film as a teen thriller, Prior said.

Prior takes pride in the fact that "The Empty Man" has received some excellent reviews since its release. "It's been said before, but there's something probably in the nature of finding something that's been discarded and picking it up and dusting it off and going, 'Hey, I kind of like this,' that makes you take ownership of it in a way that it inspires more personal devotion than something that had been really cleverly marketed to you."

Vulture has described "The Empty Man" as "the next great cult horror film." And fellow filmmaker Guillermo del Toro has reached out to Prior.

"Guillermo del Toro called out of the blue the other day and was enormously supportive and flattering about it," Prior said. "He said that he was so offended by the way the film was treated that I think he said he thought it was his moral duty to try to make sure that doesn't ever happen again."