A piece of art on the Capitol Square in Madison, Wisc. depicts a state map etched in metal. Steven Potter/WPR

Redistricting is underway in Wisconsin. What is it, anyway?
An Unseen Force
Listen
An Unseen Force
Home
/
Mapped Out
Tuesday, September 28, 2021, 4:00pm
By
Bridgit Bowden and Shawn Johnson
Share:

There are these terms in politics that you hear all the time — red state, blue state, purple state.

Purple state: It's what happens when you mix the same amount of red and blue, Republican and Democrat. Wisconsin is just about as purple as they come, because elections here — statewide elections — are about as close as they get.

The 2016 presidential race was just as close, but it went the other way. Former President Donald Trump won Wisconsin that year by 22,748 votes, which was also a margin of less than 1 percent.

This is how it goes in Wisconsin, where sometimes Democrats win and sometimes Republicans. The political pendulum swings back and forth.

And it's not just races for president. In 2018, Democrat Tony Evers narrowly won the Wisconsin governor's race, defeating former Republican Gov. Scott Walker. In 2014, 2012 and 2010, it was Walker who came out on top over Democrats.

However, in this purple state where both parties win and power swings back and forth, something doesn't fit the pattern: The state Legislature.

It's very red. And it has been for the past decade. The pendulum never swings.

Redistricting — an unseen force in politics — is a big reason why. You can't tell the story of political power in Wisconsin without telling the story of the maps.

'I don't know anything about it'

On Aug. 13, just a day after Wisconsin's 2021 map-drawing cycle officially began with the release of data from the U.S. Census Bureau, WPR asked people at the Wisconsin State Fair what they knew about redistricting.

The answer more times than not was: not much.

"I don't know anything about it, actually," said Maddy Koel, of West Bend. "Absolutely nothing."

Mike Imig, of Green Bay, said he'd heard of the term "gerrymandering," but he wasn't quite sure what it meant.

This was really common. People said it's not that they're uninterested in redistricting, they just don't know about it. They never learned about it in school.

But students in David Olson's class did.

Olson, who taught social studies for a decade at Madison Memorial High School, wanted students to know how much redistricting affects their lives.

"Students need to learn about redistricting because it has definite consequences for who represents them, and what policies we create," Olson said.

Olson knows it's a heavy subject, so he walks his students through it step by step.

Step one is an event that happens once every decade that sets the table for redistricting: the census.

'We count everybody up'

Olson, a self-described political junkie, gets noticeably excited when he talks about the census, a process that's as old as U.S. democracy itself. 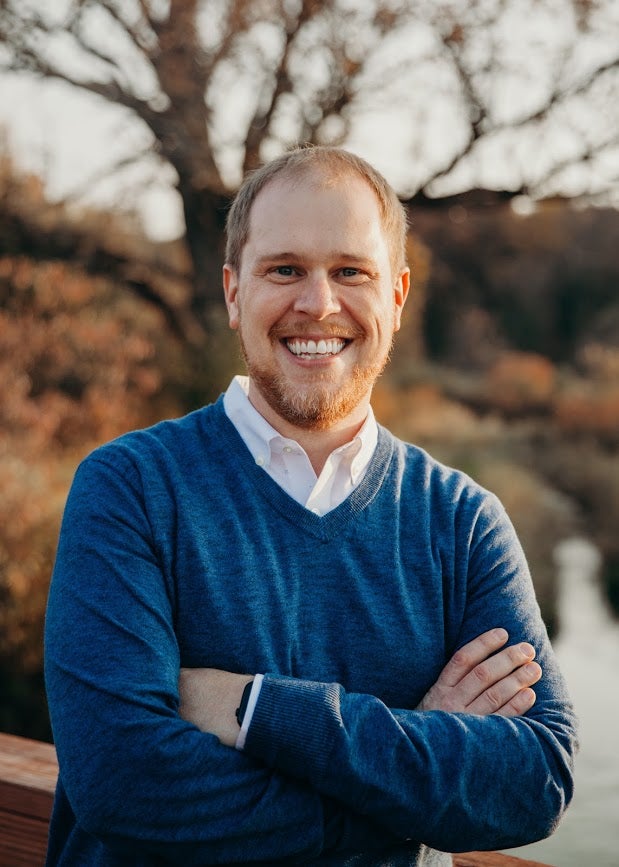 "Man, it is an event," Olson said. "A constitutionally mandated exercise, that we must enumerate our citizens."

The census counts the country's population every 10 years, finding out where people live and how populations have changed. It just happened again in 2020.

The government uses census data for a lot of things, but at the top of that list is deciding how many seats each state gets in the U.S. House of Representatives — a process called reapportionment.

There are 435 seats in the U.S. House, which are divvied up based on population. States that grow can get more seats and states that don't grow can lose seats.

Then, that information is used to draw political maps, to do redistricting.

Wisconsin has eight U.S. House districts, which are like eight puzzle pieces that cover the map of the state. Redistricting decides what those puzzle pieces will look like for the next decade.

Redistricting also slices up Wisconsin into 99 state Assembly districts and 33 state Senate districts. Each of those districts — those puzzle pieces — is represented at the state Capitol by your state representatives and your state senators.

The full puzzle — the way those pieces fit together — is a political map. Every 10 years, the Wisconsin Constitution requires that map be redrawn. The puzzle pieces change because the population changes.

"So think about the community where you live," Olson said. "Have there been people moving out? Have there been new apartment buildings going up? Did your city get bigger or smaller in your lifetime? Because that's going to make a difference as to how big your district is."

Each district has to be roughly equal in population. This concept — one person, one vote — is a fundamental part of redistricting that's grounded in decisions handed down by the U.S. Supreme Court in the 1960s.

In theory, this is what reapportionment and redistricting are all about. We count people up to make sure everyone has equal representation in their government.

"So think about the community where you live," said David Olson, who taught social studies for a decade at Madison Memorial High School. "Have there been people moving out? ... Did your city get bigger or smaller in your lifetime? Because that's going to make a difference as to how big your district is."

That’s not to say this is all there is to it. Mapmakers are expected to follow a set of traditional redistricting criteria. Districts are supposed to be compact, contiguous, respect local boundaries and preserve so-called "communities of interest," among other factors.

The trick is, these principles can be hard to measure and are often at odds with each other. Mapmakers can prioritize one in favor of another to get an outcome they want: a political advantage. This is a process known as gerrymandering.

Gerrymandering is not just another name for redistricting, it’s a type of redistricting that can go a long way toward deciding who holds power and who doesn't.

"Gerrymandering is this process of drawing political lines, of drawing district lines for a political or partisan advantage," Olson said.

The word's origin come from the early 1800s, when a political cartoon criticized a district drawn under then-Massachussetts Gov. Elbridge Gerry by saying it looked like a salamander.

"Which I think and my students think looks way more like a dragon than a salamander," Olson said. "I have never seen a salamander with wings." 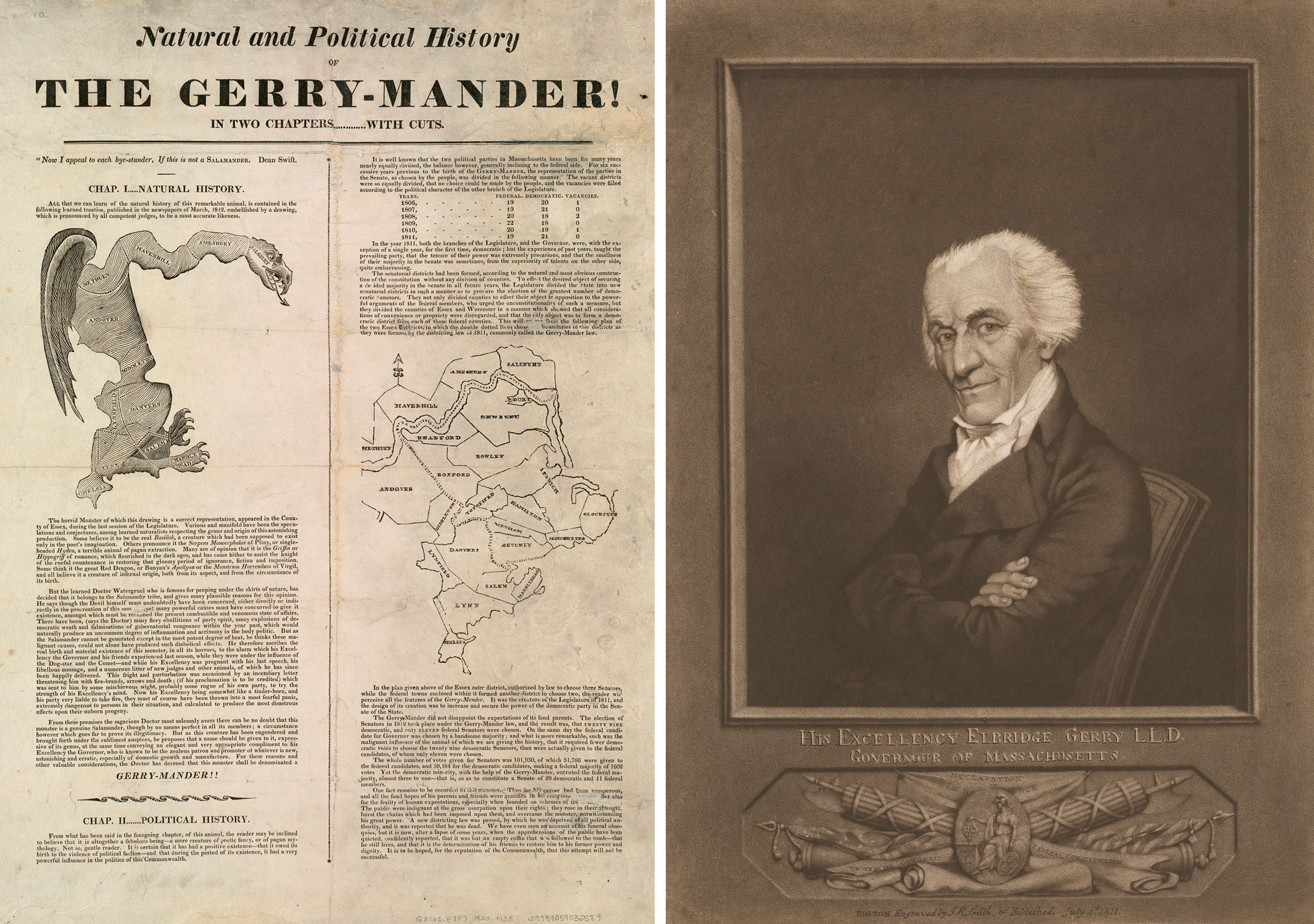 A broadside from around 1820 reprinting the original "Gerry-mander" cartoon from a Massachusetts newspaper, and an illustration of Gov. Elbridge Gerry from 1811. Images courtesy of the Boston Public Library and the National Portrait Gallery

Funny-shaped districts can be a sign of a gerrymander, but it's not the shape of the district that matters so much as the outcome it creates. How a district gets drawn can decide who gets a voice in politics and who doesn't.

There are a few basic types of gerrymandering: racial, bipartisan and partisan.

Racial gerrymandering is when districts are drawn to dilute the voting power of a certain racial group. This has a long history in this country, and it's explicitly banned.

It's up to federal courts to decide what is and isn't a racial gerrymander. Olson said it gets fought over in court every redistricting cycle.

The next kind of gerrymandering, bipartisan, happens when there's split control of government between Democrats and Republicans.

In most states, politicians get the first crack at drawing and approving political maps. They get to decide the shape of the districts in which they run. A bipartisan gerrymander can help protect incumbents and the status quo.

This happens in other states and there was a time when it happened in Wisconsin, but not in the last redistricting cycle.

The third kind of gerrymandering is what's known as partisan gerrymandering, when mapmakers intentionally redistrict to benefit one party. This has been the most significant in Wisconsin over the past decade.

There's no shortage of people who want to change this, but partisan gerrymandering is not illegal under federal law, and mapmakers do it all the time.

"This is something where politicians who are empowered often take advantage to cement their own power," Olson said. "Ultimately, that undermines the power of individuals to have a say in their government."

In the world of redistricting, mapmakers are not strictly cartographers. They're the people who are in charge of the process — the people with the power.

"This is not a Democratic or Republican problem," he said. "It's a both-and."

In other states like Maryland, where Democrats are in charge, they've drawn gerrymanders that favor their party.

And in Wisconsin, Republicans drew a map in 2011 that helped the GOP.

"This is something where politicians who are empowered often take advantage to cement their own power," Olson said. "Ultimately, that undermines the power of individuals to have a say in their government."

'They made it easier for themselves'

In Wisconsin, the state constitution gives the Legislature the first chance to redraw maps every 10 years after the census. Whatever lawmakers come up with has to be approved by the governor, just like any other bill.

They could in theory agree on a redistricting plan, but based on their record, this is extremely unlikely. If they don't agree, the next map could be decided in court.

This was basically the norm in Wisconsin for more than 50 years because for most of that time, Wisconsin was under divided government. This is pretty normal in a purple state.

But the last time Wisconsin's maps were drawn, things were different. Republicans had just won a massive wave election. Walker was governor, and the GOP controlled both houses of the Legislature, giving them total control over the redistricting process.

Olson said those 2010 victories gave Republicans the power to draw the map they wanted for the next decade.

"The consequence of Republicans doing a really good job of getting elected in 2010 was they made it easier for themselves to get elected in 2012 and 2014 and on and on," he said.

Those maps came together at a time of great turmoil in Wisconsin government. Despite their historic implications, they largely flew under the radar.

This story is part of "WPR Reports: Mapped Out," a podcast about redistricting in Wisconsin. Never miss an episode by subscribing now on your favorite podcast app or at wpr.org/mappedout.