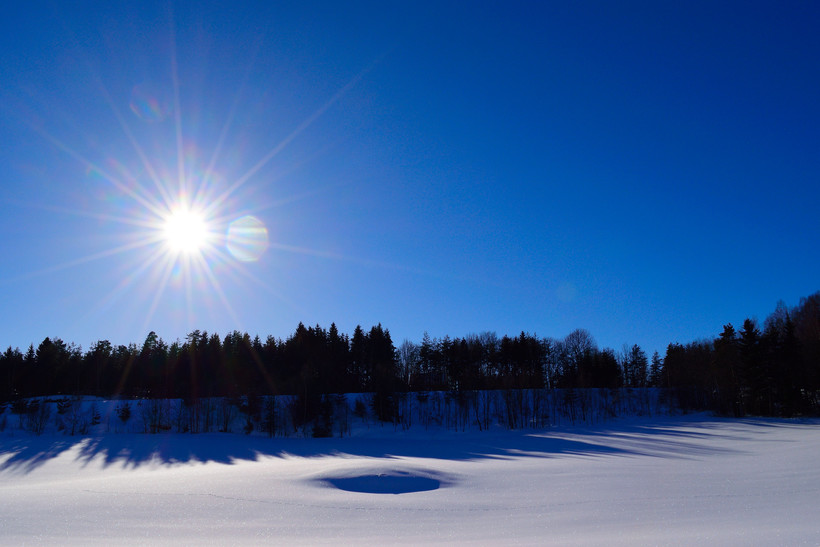 WPR Music Hosts Share Songs To Drive The Cold Away

Now that winter has settled in and made itself at home, WPR's music hosts offer this varied selection of music to add some light and warmth to your days. In the words of an old ballad:

All hail to the days that merit more praise

Than all the rest of the year,

And welcome the nights that double delights

As well for the poor as the peer!

That doth but the best that he may;

To drive the cold winter away.

I have a whole grab bag full of pieces that can lift me up when things get dark and cold during our long Wisconsin winters. These range from luminous choral works to meditative piano sounds and musical birdsong.

One of my go-to favorites is Hugo Alfvén’s "Swedish Rhapsody no. 1," also known as the Midsummer Vigil.

It depicts the festivities in northern Sweden on the longest day of the year, when there is light in the sky nearly all night long. It’s a tradition there to stay up all night to welcome the first rays of sun at dawn. There’s lots of dancing and folk music, and a big bonfire.

Alfvén incorporated several traditional Swedish songs into the composition, building on them ingeniously all the way through to the breathtaking dance at the end.

This is uplifting, sunny, happy music that never fails to evoke a sense of lightness and warmth. It’s only a 13-minute piece, but sometimes that’s all it takes to turn the tide.

In 2012, the Choir of New College, Oxford released "Illumina: Music of Light," featuring the first-ever vocal setting of Barrington Pheloung’s theme for the wildly popular "Inspector Morse" television series. Director Edward Higginbottom’s text weaves together the Latin Benedictus and a traditional Irish blessing, with an effect that is both bright and haunting. Pheloung, 65, died this August at his home in Australia.

Blessed is he, may he be blessed

And may he bless us.

May the road rise to meet you,

May the wind be always at your back,

May the sun shine warm upon your face,

The rain fall soft upon your fields,

May God hold you in the palm of his hand,

Until we meet again.

Over the years, I’ve aired a good many world music recordings grounded in ideas linked to the darkness that employ the pastoral voice of the flute. Other vocal and instrumental portrayals expose the darkness as the hidden and painful side of unrequited love. Themes on darkness have also been associated with loss, death, evil, the end of some event, harvest time, the flow of waterways, and of course, the annual shifting of seasons.

Music expressed in sacred and spiritual traditions in Sufism, Santeria, Christianity, Judaism, Islam, Hinduism, Voodoo, and Mysticism generally assign darkness as a sometimes-scary metaphorical place or state of mind that practitioners should avoid.

However, there are many songs and instrumental works that reveal the essence of darkness as profoundly good for rest and restoration conceptualized in the mysterious rebirth of seasons, intended for the rekindling of a broken relationship, and the evolution of the human condition. It seems to me that even the role of rests in musical notation that represent intervals of silence hint at the darkness, primarily when assigned to a minor key.

So, I ask, is it conceivable that such absences of sound metaphysically represent a broader concept of darkness? I’m tilting my answer toward yes, explicitly when darkness and light are musically conjoined and attached to the mind, body, and spirit, even if it is just a momentary musical illusion.

For the sake of discussion on darkness, what does the following pastoral work by flutist R. Carlos Nakai symbolize to you?

On "Simply Folk," we love to highlight Wisconsin artists, and that includes Katie Dahl, a Door County musician who is getting a lot of recognition for her latest album, "Wildwood," released this year. Performing with her husband, Rich Higdon, Dahl has recorded four of her own albums, plus she’s contributed to two others.

Her recent CD includes the song, "In the Dark," which she wrote while pregnant with her son. The acoustic guitar at the heart of the song’s instrumentation gives this piece a simplicity that matches the season of darkness and expectation. And the lyrics add to that sense of wonder at possibilities, when we long for the light to return:

It’s that time of year

When it’s hard to say

And what is dying...

In the dark, who brings the light

In the dark, who brings the light

Looking for a way to escape from the early winter blues? Chopin’s "Nocturne in B-flat minor, Op. 9 No. 1" just might do the trick. With the changes of mood from the minor to major harmonies, let the music guide you from the darkness to the light.

When it comes to brightening up a winter night, what beats a bonfire?

In 1949, late in his career, Sergei Prokofiev began "A Winter Bonfire," a suite for children performed by a boys' choir and orchestra.

Its eight sections follow a group of Young Pioneers (the Russian equivalent of Boy Scouts) through their departure by train, their first night away from home in the country, a waltz on the ice, the lighting of the bonfire, the boys’ chorus, a reflective winter evening, a slightly satirical march back to the train, and homecoming.

Here it is as performed by the Paiseley Abbey Boy Choristers Scottish Chamber Orchestra with José Serebrier, conducting:

We’ll see less than nine hours of sunshine on Saturday, Dec. 21 – the day of the winter solstice. The next day we'll all say to each other, "The days are getting longer." It’s an annual expression of hope bolstered by a sure solar promise. With longer days ahead, we'll feel better.

With the energy of the sun as the essential force behind all forms of life, it is not surprising that the sun was and is an inspiration for music since the first notes were sounded.  Browsing through the WPR music database reveals dozens of pieces in a variety of genres, representing all the music periods and covering different observances of the sun. The experience most often depicted by the late 19th and early 20th century composers is the daily gift of sunrise.

One piece gets a head start on all the others. It’s "A Song Before Sunrise" (1918), by English composer Frederick Delius. You’ll hear a "cock-a-doodle-doo" in the wind instruments.

The ultimate majestic approach to sunrise is Richard Strauss' tone poem "Also Sprach Zarathustra" (1896) which opens with a spectacular fanfare, music that was borrowed 72 years later by Stanley Kubrick for his film "2001: A Space Odyssey."

Carl Nielsen’s "Helios Overture" (1903) was composed on a visit to Athens during which he tracked the path of the sun over the Aegean Sea from dawn to dusk and set the images to music. (Let’s hope he applied enough sunscreen.)