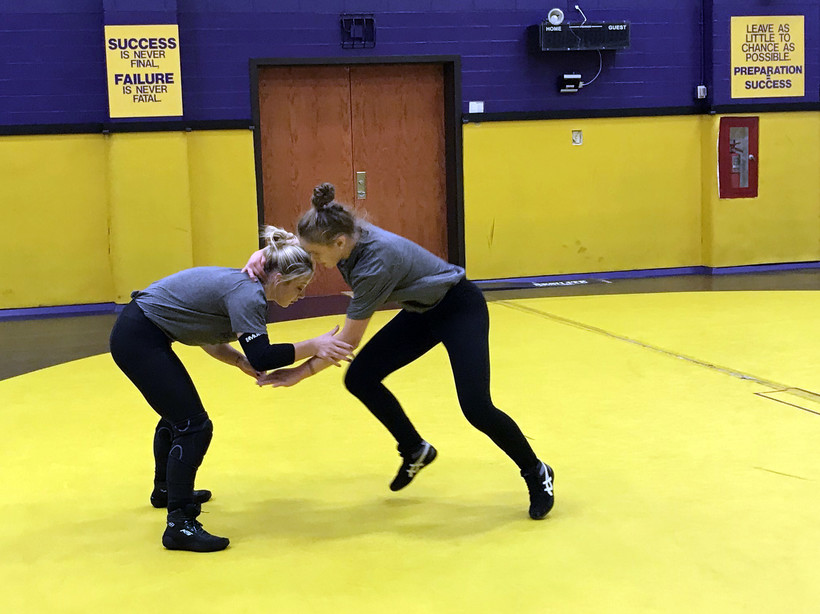 Abby Nelson, right, goes after her teammate Brooke Thurber during a practice of the women's wrestling squad at UW-Stevens Point. The program is new this year. Rob Mentzer/WPR

It's The First Women's Wrestling Program At A Public University In The Midwest. It Won't Be The Last.
By Rob Mentzer
Share:

Jessika Rottier started wrestling when she was 4 years old. She wanted to be like her big brother, she said.

Rottier is from Pulaski, and she started competing in youth leagues around the Green Bay area. There wasn’t a girls wrestling program at her school, so she joined the boys team, and competed exclusively against boys until college.

She was also really good at it.

Wrestling is a sport but it’s also a discipline, almost a lifestyle. Besides the grind of the daily workouts and physically demanding practices, it requires an equally intense mental and even emotional focus. You learn who you are through the sport, she said. You push yourself to your limit and then past it. Rottier loved everything about it.

Women’s wrestling might be the fastest-growing sport in the country, with an explosion of participation at the high school and college levels. Participation in the new sport has outpaced UWSP’s expectations. There are 11 students on the squad, nine pictured here. Courtesy of UW-Stevens Point Athletics

Wrestling For Women And Girls Is Growing 'Pretty Much Exponentially'

The numbers tell the story.

In 1994, there were 804 high school girls across the country competing in their school’s wrestling programs, according to the National Wrestling Coaches Association. In 2018, there were 16,562. There are official scholastic state championships for girls wrestling in 18 states, plus Guam.

Wisconsin isn’t one of them, though there are plenty of advocates who are calling on the Wisconsin Interscholastic Athletic Association (WIAA) to change that. So far, the WIAA has not been supportive.

UW-Stevens Point head wrestling coach Johnny Johnson noted that the Wisconsin Wrestling Federation does host a girls state tournament, and for this school year, the March tournament will be hosted in Stevens Point at the university. Given that the WIAA’s offices are also located in Stevens Point, Johnson hopes that helps to drive home to WIAA administrators that there is a real and growing interest in the sport.

It’s not a sanctioned high school sport in Wisconsin yet, Johnson said, but "I think we're going to be there pretty quick."

Johnson was a two-time All-American wrestler with the University of Oklahoma. He competed internationally after college, then started as a coach. He’s coached men’s wrestling in Stevens Point for more than 20 years. It was several years ago that he and others on his coaching staff made a push to add women’s wrestling.

"Every time we would see an article or something that would indicate that women’s wrestling was growing pretty much exponentially, we would send that to our athletic director," he said.

There are more than 63 colleges in the United States with a varsity women’s wrestling program. That number is exploding, too. Since UW-Stevens Point announced last year that it would add the program, Johnson said, there have been some 26 schools that have announced they will also add collegiate women’s wrestling.

Historic Meet For An Emerging Sport

Brooke Thurber and Abby Nelson are teammates in UW-Stevens Point’s program. They both started wrestling because their fathers were coaches — Thurber’s in Nekoosa in central Wisconsin; Nelson’s in far northern Iron River. Both call wrestling a passion, though Nelson admits she sometimes has had a "love-hate" relationship with all the sport demands, especially growing up.

"It’s hard to be a woman in a man’s sport," Nelson said. "But now it’s turning into a woman’s sport as well."

On a late October afternoon, after practice, Nelson said she was a little nervous about the team’s upcoming meet against Michigan’s Adrian College. She’s a first-year student, and it would be her first competition in college. Brooke Thurber’s legs fly as she wrestles a teammate in practice at the UW-Stevens Point wrestling facility. Rob Mentzer/WPR

It was Thurber’s first, too, even though she is a senior. Since leaving high school, she’s competed in open tournaments and helped out with her father’s program. It wasn’t until the new program launched that she was able to join an organized team again. She appreciates the technical side of the sport and relates to Johnson’s phrase that wrestling is like a "physical chess match," requiring competitors to anticipate any possible moves they leave open for their opponents.

Like Rottier, Thurber has watched the growth of the sport — and the way people’s attitudes about it have changed.

"There was such a stigma … that girls shouldn’t be in a boys’ sport because it’s so aggressive," she said. "But girls can be just as aggressive and just as technical as boys, and they can work just as hard."

Adrian College won the eight-team competition Oct. 26, but both Thurber and Nelson notched important victories there. Nelson became the first-ever Pointer woman to win a collegiate wrestling match. She faced her teammate Thurber in the finals in their weight class. Thurber won it.

On Wednesday, the women will host UW-Stevens Point’s first dual wrestling meet at home. They’ll compete beginning at 7 p.m. against Lakeland University, which added its women’s wrestling program in 2018. The meet will be broadcast on the university’s YouTube channel.

Johnson said the university is ahead of schedule on participation. There are 11 on the squad now; they hoped to have 20 by the program's third year. Johnson said they could make that next year. The NCAA, meanwhile, will take a vote in January on whether to make women's wrestling one of its "emerging sports for women," a designation that would be the first step toward an NCAA-sanctioned collegiate championship, which could bring even more publicity and participation to the sport.

Regardless of what any state or national sports bureaucracy does, the organic growth of the sport is undeniable.

"There are females out there that want to pursue this sport … and become the next greats," Rottier said.