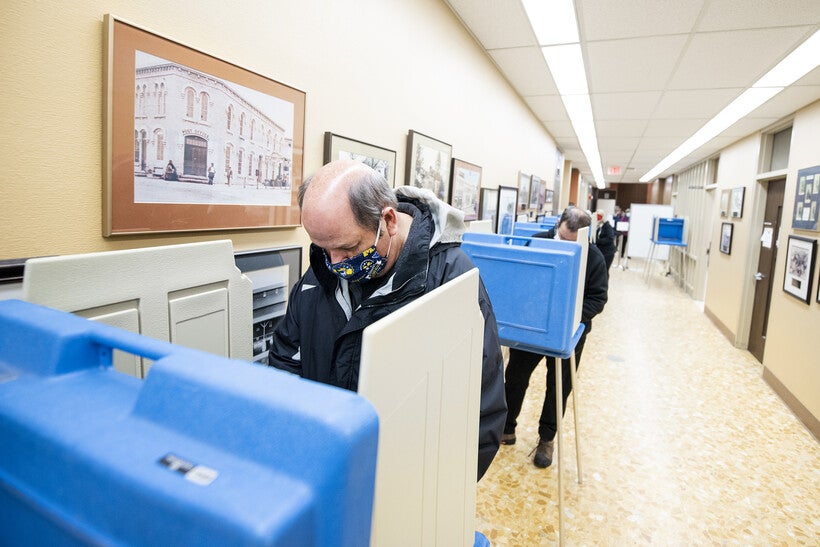 Wisconsin Voters Are Casting Ballots To Determine The Fate Of 10 Electoral Votes For The Presidency
By Elizabeth Dohms-Harter
Share:

In an election cycle stained with political unrest, Nov. 3's approach feels like a white flag waving. But while Tuesday will mark the end of belligerent mailings and commercials, pollster phone calls and text messages, the process to name the nation's next president is really just getting started.

That's because the general election — where people flock to the polls and county clerks spend hours opening, vetting and counting absentee ballots — determines the popular vote, and then it's up to the state electors to cast their own votes to ultimately decide the next president.

And as the Electoral College's significance comes into focus after Tuesday, so will Wisconsin's role in it.

The Electoral College is a system governing the election of a president and vice president where appointed people in each state cast ballots that determine the winners. Often, but not always, the votes that are cast are reflective of whichever candidate wins the state's popular vote.

It was built into the U.S. Constitution and has been around for hundreds of years. It's also a system that has been lambasted as undemocratic. There have been a few times in history when a man has been cast into the presidency who didn't actually win the popular vote.

Most recently, questions over the legitimacy and fairness of the Electoral College surfaced after President Donald Trump's upset in 2016, when he won the office with 306 electoral votes to Hillary Clinton's 232, at the same time that Clinton won the popular vote by about 2 percent.

Some analysts agree Trump isn't likely to win the popular vote this year, but say that he could win a second term by way of the Electoral College in a 2016 redux. 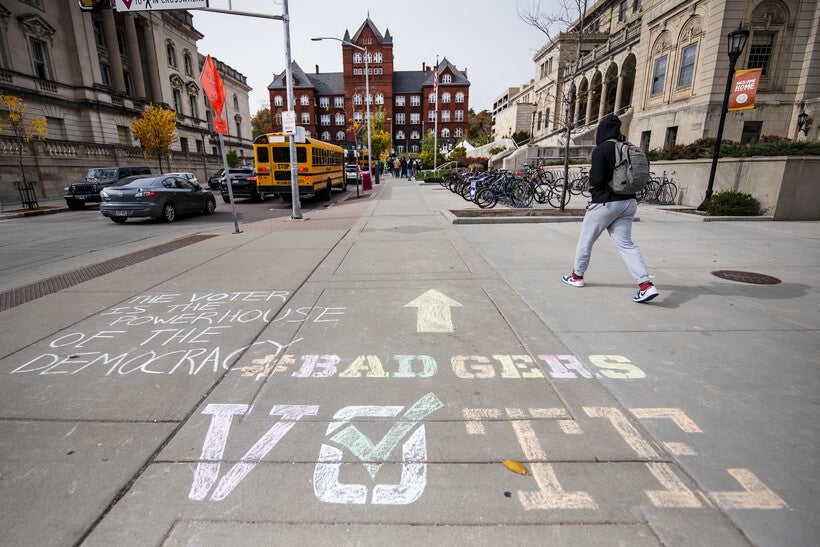 As for Wisconsin, its political pendulum is unpredictable, with a streak of Democratic wins in the past several decades broken by a Trump win in 2016. The state is one of eight being closely watched as potential game-changers in the bid for president.

That was the case in 2016, too, when Wisconsin was split nearly down the middle in support for the two major candidates. Trump, with 1.41 million votes compared to Clinton's 1.40 million, ultimately collected the state's 10 electoral votes.

Wisconsin's 10 votes correspond with its eight Congressional districts and two U.S. senators. Each state and the District of Columbia gets at least three electoral votes, because each state has two senators and at least one congressperson in the U.S. House of Representatives.

Wisconsin is an all-or-nothing state, so whoever wins the popular vote in the state, no matter who wins each district, gets all the electoral votes.

The Role Of Electors

In total, there are 538 electors — people appointed to cast votes in the Electoral College on behalf of their state — from the 50 states and Washington D.C. who determine the winner of the presidency. At least 270 votes are needed for a candidate to win.

According to Wisconsin law, the parties who have a presidential candidate on the ballot get to select their own electors.

There's no such penalty in Wisconsin, but Barry Burden, professor of political science at UW-Madison, said that's why the parties are so careful when choosing their electors.

"They just want to be able to trust them when they walk into the Capitol," Burden said.

Scott Grabins is one of the electors who has promised to cast a vote for Trump if the current president secures a popular vote win in the state. With a background in technology, Grabins got involved as a volunteer for the Republican Party about 12 years ago, primarily helping the Republican Party of Dane County with website development. Later, he was elected as the county chairman for Dane County and served three times as a delegate to the Republican National Convention.

Like many of the electors chosen to represent the party's interests, Grabins has been a long-time Republican supporter and volunteer who represents the 2nd Congressional District in and around the Madison area.

Although it's his first time serving as an elector, it's common for electors to serve more than once, Burden said.

Over the summer and oftentimes during their conventions before an election, each party comes up with their slate of electors to have ready in case their candidate wins the state. Those delegates get approved at a meeting of all party leaders at the state Capitol in October, and the list is sent to the state Elections Commission.

That list has to be approved by the commission and by Congress.

There are a few dates that are particularly important to electors, but in between that time there's a lot of waiting, Burden said. Until election day, Grabins said his focus will be on continuing to advocate for Republican candidates in Dane County.

After the presidential election, Grabins and the other electors will wait until the votes are tabulated and certified by the Elections Commission, which happens by Dec. 1. By Dec. 8, any controversy over the election results must be resolved — a deadline referred to as the Safe Harbor Date. Then, six days later on Dec. 14, all electors for the winning party meet at their state Capitol at noon to cast their votes.

Grabins said if Trump wins the popular vote, he expects to get a letter from the Elections Commission detailing next steps.

The electoral votes are counted in January and the winning candidate is sworn into office at noon on Jan. 20. 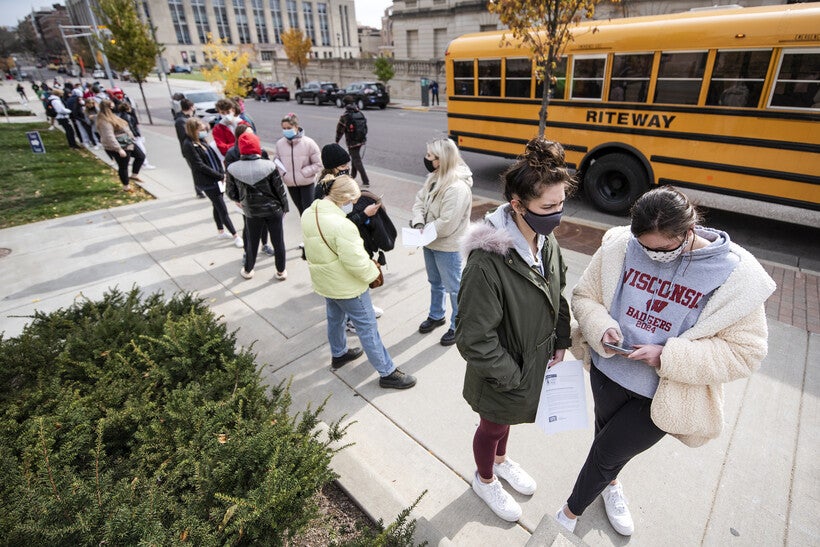 Most states and Washington, D.C. are like Wisconsin: They hand all elector votes to the winner of the popular vote in their election. Nebraska and Maine split their votes based on the overall popular vote, as well as who wins the vote in each of their Congressional districts.

Grabins noted that Trump's election in 2016 really called attention to the Electoral College in ways he hadn't seen before.

"I don't know that very many people knew much about the Electoral College and the electors," he said. "It obviously became very prominent four years ago and has the potential to be very prominent again this year."

The Possibility Of Subversion

That's true particularly because of the intensity that's grown between Democrats and Republicans during the Trump presidency, and warnings that Trump could subvert the role of the Electoral College.

His campaign could do that, warns an article in The Atlantic that was published online in September, by getting leaders of Republican-controlled states to appoint their own slate of electors who would vote for Trump. Effectively, this would mean that two slates of electors could submit their votes to the Electoral College and leave it up to Congress to decide who gets the vote.

A justification for this, the reporter writes, could be that there's too much fraud to trust the popular vote. And, as in every other state, this could happen in Wisconsin.

The U.S. Constitution gives state legislatures power over how the electors are allocated. In Wisconsin, the Legislature gave that authority to the voters by way of the parties choosing their own slate of electors. But the Legislature could, theoretically, take back that power and appoint its own contingent.

The gray area, explained Burden, is in whether the Legislature can intervene at any time during the election process. This almost happened in 2000, during the George Bush and Al Gore election, where the Florida legislature almost passed a rule to appoint Republican electors for Bush, regardless of the outcome of the popular vote.

"There is a belief out there that legislatures have this power," Burden said. "I think our state law makes it pretty clear that they wouldn't have that power once the elections are underway."

Geoffrey Peterson, professor of political science and American Indian studies at the University of Wisconsin-Eau Claire, agrees that the Legislature appointing its own slate of electors isn't likely to happen. For one, he said numerous states would have to take this action to affect the outcome of the presidency. And if just one legislature decided to do it, they'd look foolish, he said.

"I would be really, really surprised if the state Legislature suddenly decided this was the hill they wanted to die on," he said, acknowledging that legislatures who decide to take this action would be setting the stage for political chaos.

And, he said there's little doubt that such a response by the Legislature would result in a court challenge at the state level because of the timing being post-election. Those angry with the decision could argue that the state already agreed to give voters the authority to choose its electors.

Still, Peterson doesn't think this election will have much of an impact on the Electoral College process.

"The Electoral College was intended to be this sort of barrier between the popular vote and who actually becomes president," said. "And the truth is that it works to one party's advantage or the other."

An Electoral College win for Trump might spur Democrats against the system at large, but Peterson said there are just as many Republicans who will fight to keep the system that seems to benefit their party.

Any changes to the U.S. Constitution requires ratification by two-thirds of states.

"And that, at least in our current political climate, seems essentially impossible," he said.