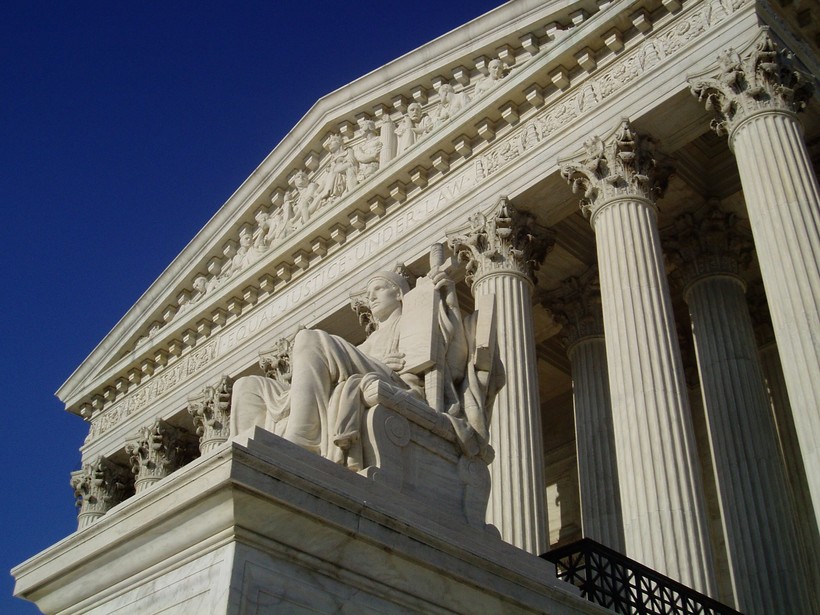 Wisconsin's Redistricting Case Could Soon Be Headed For SCOTUS

Some Questions And Answers On The Lawsuit That Struck Down Wisconsin's Republican-Drawn Legislative Map
By Shawn Johnson
Share:

The U.S. Supreme Court could announce soon whether it plans to hear an appeal of a ruling that struck down Wisconsin’s Republican-drawn legislative map.

Wisconsin's redistricting case is one of several justices could discuss during a private conference Thursday. They could also discuss it later this month.

Legal observers from across the political spectrum say they expect the court will want to get involved in Wisconsin's case, though they're less sure about how justices will ultimately rule.

Here's a rundown of the issues raised and when the court might act.

Wisconsin's redistricting lawsuit was filed by a group of Democratic voters who contend the legislative district lines drawn by Republicans in 2011 were "both unconstitutional and profoundly undemocratic." Plaintiffs contend the map, known as 2011 Wisconsin Act 43, "was drafted and enacted with the specific intent to maximize the electoral advantage of Republicans and harm Democrats to the greatest possible extent."

In a 2-1 decision late last year, a federal court agreed, writing the plan "intended" to burden the representational rights of Democrats.

"Moreover, as demonstrated by the results of the 2012 and 2014 elections, among other evidence, we conclude that Act 43 has had its intended effect," wrote federal judge Kenneth Ripple, referring to the name of the statute enacting the map.

What Are The Implications?

In a separate 3-0 opinion issued earlier this year, the same court ordered the Legislature to redraw Wisconsin's legislative boundaries by Nov. 1, 2017 so they'd be ready in time for the 2018 general election.

If the U.S. Supreme Court upholds Wisconsin's case, it means GOP lawmakers would have to draw new district lines that are more competitive, and hence, give Democrats a better shot at winning seats than they have right now.

But Wisconsin's case has implications that stretch well beyond that.

Most redistricting lawsuits challenge other issues, like whether legislative districts dilute the voting power of minorities or break up communities of interest.

If upheld by the U.S. Supreme Court, Wisconsin's case would be the first successful partisan gerrymandering lawsuit in United States history.

What Are Justices Discussing Thursday?

We only know justices could discuss Wisconsin's case Thursday — court records show it was added to the list of cases on the agenda for Thursday's private conference.

That's not to say justices will act on the case immediately.

The court often announces whether or not it will hear cases for oral argument on the Monday following a conference, but given the court’s wide discretion on matters like these, an announcement could also come later, or any day in between.

While it’s hard to predict the exact timing, experts are confident justices will want to hear arguments, and ultimately write a decision.

In theory, the court could issue brief orders either affirming or denying the lower court’s decision without hearing arguments, but experts say that’s unlikely.

If The Supreme Court Hears Wisconsin’s Appeal, What Happens Next?

The exact timing — again — would be up to the Supreme Court, but legal observers think that if justices hear Wisconsin’s case, they could schedule oral arguments for late 2017 or early 2018.

If that happens, expect groups from around the country to file what are known as amicus briefs with the court in an effort to sway justices.

Once oral arguments are done, observers expect the court could issue a decision in the case by June 2018, which is the end of its upcoming term.

What Would That Mean For The 2018 Election?

This one’s tough to answer because there are different ways Wisconsin’s redistricting case could play out.

Republicans expect to win the case outright, and if they do, the legislative map they drew in 2011 would remain in place for the 2018 and 2020 elections.

But the Wisconsin Department of Justice, led by Republican Attorney General Brad Schimel, is hedging its bets.

Schimel’s office asked the court for a stay that would temporarily halt the lower court’s ruling while this appeal proceeds.

"Any decision on a stay will essentially decide whether there’s any chance that new maps will be made for use in 2018 or not," Levitt said.

The lower court ordered the Legislature to redraw its map by November of this year so candidates would have time to circulate nomination papers next spring for elections next fall.

Even if the court eventually strikes down Wisconsin's map as unconstitutional, a stay could mean a new map won't be in place until the 2020 election.

Democratic plaintiffs hinted at that possibility in a brief filed Wednesday urging the Supreme Court to reject the stay request.

"If there were no remedial plan in place by the spring of 2018, candidate filing deadlines for the 2018 elections would be placed in jeopardy and voters might be forced to endure yet another election in 2018 under unconstitutional districts," plaintiffs wrote.

Why All The Focus On Justice Anthony Kennedy?

There are nine justices on the U.S. Supreme Court, but when lawyers developed this case, they had Justice Anthony Kennedy in mind.

But while he was not prepared to declare Pennsylvania’s map a partisan gerrymander, Kennedy said a lot in his opinion that led court-watchers to believe he might view the issue differently in a future case.

"The ordered working of our Republic, and of the democratic process, depends on a sense of decorum and restraint in all branches of government, and in the citizenry itself," Kennedy wrote in 2004. "Here, one has the sense that legislative restraint was abandoned."

Kennedy said the court should remain open to striking down political gerrymanders in the future if someone could come up with a reliable way to measure how much partisanship is too much.

"If workable standards do emerge to measure these burdens," Kennedy wrote. "Courts should be prepared to order relief."

Plaintiffs in Wisconsin’s case hope to answer that.

When Is A Partisan Map Too Partisan?

It’s widely accepted that legislators have always had partisan motives — they typically run as Democrats and Republicans, after all.

But plaintiffs in Wisconsin's case argue Republicans here were so overtly partisan — and so precise in their drawing of districts — that they made it all but impossible for Democratic voters to influence which party controls the Legislature in an otherwise politically competitive state.

They’re essentially arguing that what happened in Wisconsin was a textbook example of partisanship that went too far, one that courts could use to identify, and strike down partisan gerrymanders in other states.

"The Supreme Court has said that it’s looking for a test for partisan gerrymandering," said the Campaign Legal Center’s Ruth Greenwood, one of the attorneys representing Democratic plaintiffs. "This case says we’ve found a test."

The test developed by plaintiffs requires proof that one party drew a map specifically to discriminate against another party’s voters.

In Wisconsin’s case, they point to a factual record of GOP lawmakers meeting secretly to develop the map and choosing a plan that strongly favored Republicans over other more balanced alternatives.

The plaintiffs' test also requires evidence that a redistricting plan has had its desired effect — a sizeable partisan gerrymander that is likely to endure in election after election.

To help measure that, plaintiffs developed a new metric called "the efficiency gap" that measures a party's total votes in legislative races compared to the number of legislative seats it actually wins.

A high efficiency gap means it's especially hard for one party to turn votes into legislative seats, and Wisconsin's map has one of the highest efficiency gaps of any redistricting plan recorded in the past four decades.

Is This Just Democrats Versus Republicans?

Practically speaking, it is right now. Democrats are the ones who sued to overturn Wisconsin's map and Republicans in Wisconsin and other states are fighting it.

But while this case is breaking down along those lines, plaintiffs say it wouldn't always be that way.

"It's shaping up that way because 2010 was a wave Republican election," said Bill Whitford, a retired University of Wisconsin Law Professor, a Democratic voter, and the lead plaintiff in Wisconsin's redistricting case.

Because Republicans won big in Wisconsin and other states in 2010, they won the right to redraw legislative districts after the most recent census.

"There are Democratic gerrymanders out there in other places in the country, other jurisdictions, and they will be vulnerable to attack if we were to win in the Supreme Court," Whitford said. "I'm not claiming Democrats are 'holier than thou.'"

But Republicans contend there's more at play in this lawsuit, and it's not just a matter of circumstances.

Rick Esenberg, president of the Wisconsin Institute for Law and Liberty, said it's harder for Democrats to win majorities in state legislatures because their voters are increasingly concentrated in cities, while Republican voters are spread out geographically.

"We think that this is really — in the guise of nonpartisanship — an attempt to gain a partisan advantage," Esenberg said. "It's a project that seeks to use the courts to remedy the natural disadvantage that Democrats have."

What Does The Rest Of The Court Think About Partisan Gerrymandering?

Kennedy — a nominee of Republican President Ronald Reagan and a frequent swing vote on the court — joined other GOP nominees and tipped the balance.

Thirteen years later, the court is still defined by the same mix of Democratic and Republican nominees, but the personalities have changed. Only four of the justices who ruled on the 2004 partisan gerrymandering decision remain on the court today.

"That's a pretty big turnover," said Levitt, of Loyola Law School, said. "I don’t think that the party of the president appointing the justices is a particularly reliable signpost for how they’ll vote in a case like this."