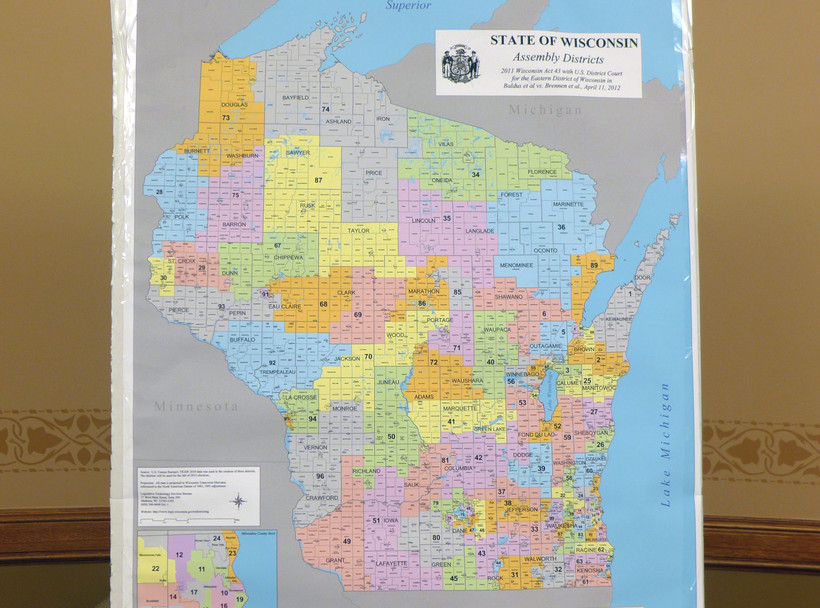 3-Judge Panel Orders Boundaries To Be Redrawn By November
By Shawn Johnson
Share:

A federal court has ordered Wisconsin lawmakers to redraw the state’s legislative district lines by Nov. 1, saying the current lines are unconstitutional and should be replaced in time for the November 2018 election.

"Under the prevailing view in this court, the people of Wisconsin already have endured several elections under an unconstitutional reapportionment scheme," wrote Judges Kenneth Ripple, Barbara Crabb and William Griesbach in an eight-page court order. "If they are to be spared another such event, a new map must be drawn in time for the preparatory steps leading up to the election."

While the move represented another victory for Democratic plaintiffs who brought this redistricting lawsuit, it fell short of the outcome they’d hoped for. Democrats wanted the court to redraw Wisconsin’s legislative district lines instead of leaving the decisions to Republican lawmakers, who drew the current district lines in 2011.

Still, the ruling was roundly celebrated by Democrats and groups who brought the lawsuit, who said it would give voters a fair shot at picking the representatives they want in the 2018 election.

"This is a great win," said Sachin Chheda, director of the Fair Elections Project, which helped launch the redistricting lawsuit. "Once again, the court has emphatically instructed the state to move ahead and draw new maps.  They’ve said clearly that the current maps are unconstitutional and they’re violating the rights of Wisconsin citizens.  And we need to move ahead and have the next round of elections happen under fair and honest, transparent maps."

Friday’s court order may not be the final word in this case. The Wisconsin Department of Justice, which defended the state’s legislative maps, is likely to challenge the ruling.

"We are reviewing the court’s order, but we expect to file an appeal with the Supreme Court and seek prompt reversal of this decision," said Wisconsin DOJ spokesman Johnny Koremenos in a brief statement.

"We believe the maps are constitutional," said Gov. Scott Walker Spokesman Tom Evenson.  "We are reviewing the decision with DOJ and plan to seek a prompt review from the U.S. Supreme Court."

Federal redistricting decisions are appealed directly to the U.S. Supreme Court, although the Supreme Court is not obligated to hear the appeals. Given this ruling’s potential national significance, Supreme Court justices will likely want to have a say, according to attorney Gerry Hebert, who represented Democratic plaintiffs in this case.

"If we are successful, then a ruling by the Supreme Court in our favor would apply against Democratic gerrymanders and Republican gerrymanders," Hebert said. "We do think that five justices are looking to curb one of the most fundamental abuses of the democracy we have in the United States, and that’s extreme partisan gerrymandering."

Though the makeup of the U.S. Supreme Court will change once President Donald Trump nominates his first justice, five justices are all that’s needed for a majority opinion, and five justices have already signaled an openness to striking down legislative maps in a partisan gerrymandering lawsuit like this one.  The question raised by the court in a previous ruling was how to measure when a map becomes too partisan.

Wisconsin’s plaintiffs hope to answer that question with a metric they’ve dubbed the "efficiency gap." It compares the total number of votes a party receives in legislative races statewide to the total number of seats they actually win in the legislature.

The bigger the efficiency gap, the bigger the gerrymander, and evidence presented at a trial last spring showed Wisconsin had one of the largest Republican gerrymanders ever out of hundreds of maps drawn nationwide dating back to 1972.

Friday’s brief ruling did not lay down specific parameters on how the Wisconsin Legislature should redraw this map, instead referring to the court’s 2-1 decision from last November that ruled the map unconstitutional.

Ripple, who wrote that decision, was nominated to the federal bench by Republican President Ronald Reagan. He was joined in his ruling by Crabb, who was nominated by Democratic President Jimmy Carter.

Judge William Griesbach, who was nominated to the bench by President George W. Bush, a Republican, dissented in the November ruling, although he joined the rest of the court in issuing Friday’s court order.

It remains to be seen whether the Republican-led state legislature will take any action on a new map while this ruling is being appealed.  A spokeswoman for Senate Majority Leader Scott Fitzgerald said Fitzgerald was referring all questions about this case to the Wisconsin Department of Justice.

A spokeswoman for Assembly Speaker Robin Vos did not immediately return an email seeking comment.