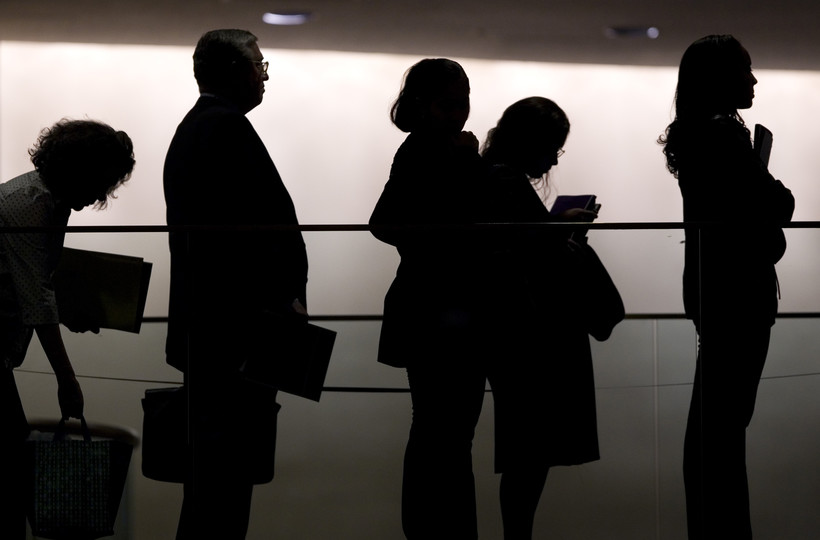 Job seekers join a line of hundreds of people at a job fair sponsored by Monster.com in New York. The income gap between the richest and poorest Americans grew last year to its widest amount on record as young adults and children in particular struggled to stay afloat in the recession. Mark Lennihan/AP Photo

Population numbers that often go unnoticed are getting more scrutiny as states like Wisconsin try to grow their workforce.

The latest census data shows the state’s population increased 0.4 percent, the most in a single year since 2010. Most of that is due to fewer people leaving, says demographer David Egan-Robertson with the University of Wisconsin Applied Population Laboratory. "Wisconsin is part of the pattern of the Upper Midwest," said Egan-Robertson. "The states in this area are generally growing quite slowly. A lot of that is due to migration in the country; its been a long-term pattern for decades. There tends to be more movement out of the Midwest and northeast states into the south and western states."

Since the Great Recession, which started in 2007, Wisconsin has had more people moving out of state than coming in.

Gov. Scott Walker wants to combat the state’s worker shortage with a $6.8 million marketing plan to attract younger workers from neighboring states. State Democrats have criticized the plan, saying there are other ways to attract millennials, such as job programs or student loan refinancing.

Wisconsin has historically attracted young people who attend college in the state but leave once they graduate. Eagan-Robertson says while those trends are widespread, some young professionals do return.

"There’s movement back into the state, particularly for those in their early 30s. So we’re actually net-gainers of people in their early 30s and even their late 30s," he said. "A lot of discussion tends to focus around this idea of 'brain drain,' well there’s also a brain gain that happens as people get older ... Occasionally those do appear in our statistics."

Births still outnumber deaths in Wisconsin. But that’s not the case in all of the state’s counties.