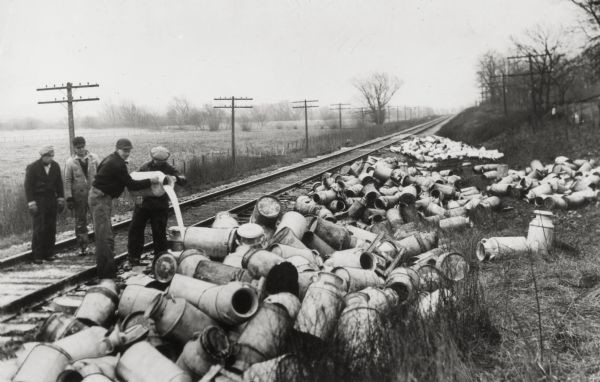 Despite its wholesome associations with with goodness, mothering and love, milk has also occasionally been a source of conflict.

In Wisconsin, low milk prices during the Depression led some farmers to reduce supplies of milk by pouring it out as part of what became know as the "milk strikes."

Things got so heated that on May 16, 1933, 75 members of the National Guard were mobilized to quell the violence.

Dairy wasn’t the only source of contention. Depressed prices led to violence and strikes in many agricultural sectors. By 1933, dairy farmers were receiving less than half of what they had made for their milk in 1930.

Desperate to get more for their milk from manufacturers, the Wisconsin Cooperative Milk Pool, one of several dairy organizations, called for a statewide milk strike beginning on Feb. 15, 1933. Farmers would withhold milk supplies until they received a better price.

Tensions flared around the state. Farmers in Outagamie County dumped truckloads of milk and shut down a number of dairy plants. Others blocked roads with barricades of logs, boxes and their own bodies to stop the milk trucks.

The strike lost steam, though, as the days passed as milk trucks found alternative routes. A truce was called on Feb. 22 with Gov. Albert Schmedeman promising to study the prices.

But when prices didn’t improve, the Milk Pool called for another strike in May. This one would be bigger with the influential Farmers’ Holiday Association pledging to join the strike. Although the Farmers’ Holiday Association pulled out at the last minute, unemployed sympathizers from the city joined the strikers, bringing their lessons learned from factory strikes to the countryside.

One man laid on the tracks to stop an interurban train east of Waukesha. Strikers in cars across the state swooped down on trucks and dumped loads of milk. In Mukwonago, strikers tossed a harrow onto the road to puncture truck tires.

The violence and intimidation led the state to mobilize the National Guard to keep the roads open. The troops were armed with tear gas and bayonets.

One of the worst clashes happened in Waukesha County in what came to be known as the Battle of Durham Hill. National Guardsmen took on around 350 strikers with tear gas and then a bayonet charge into the crowd. An account of the day described, "unbelieving farmers kept looking around to see if they really were being prodded with cold steel."

The strike ended on May 19. After a summer of waiting for help, the farmers called a third strike, more violent than the others but also no more successful in raising prices. Among the damage of the third strike were seven bombs detonated at cheese factories; 34,000 pounds of milk dumped in Racine; and the shooting death of a striking farmer on the picket line outside Madison.

Conditions did begin to improve for farmers in 1934.