On a Friday late in March, a dozen or so people were waiting for afternoon proceedings to begin in Courtroom 615 in the Milwaukee County Circuit Court building. They were attorneys, defendants, court staff.

One defendant, unable to find child care, sat with her toddler in her lap.

Another’s boyfriend was there to lend support.

As Judge David Borowski began hearing cases, the costs related to their offenses started piling up.

There were $350 fines for two women pleading guilty to drunken driving, known legally as operating while intoxicated or OWI, plus costs, fees and surcharges for the nights they’d spend in county jail, tests they might undergo and more.

There were the hourly charges for their public defenders, the costs for the screenings and treatment Borowski ordered and the wages the defendants may have lost taking time off of work to come to court.

A man pleading guilty to resisting an officer and disorderly conduct stemming from an incident that happened when he was turned away from a homeless shelter while drunk, was ordered to undergo treatment and to check in daily at the Milwaukee County Day Reporting Center.

Another man appeared before Borowski in handcuffs, coming from the Milwaukee County House of Corrections to request a modification to his sentence. 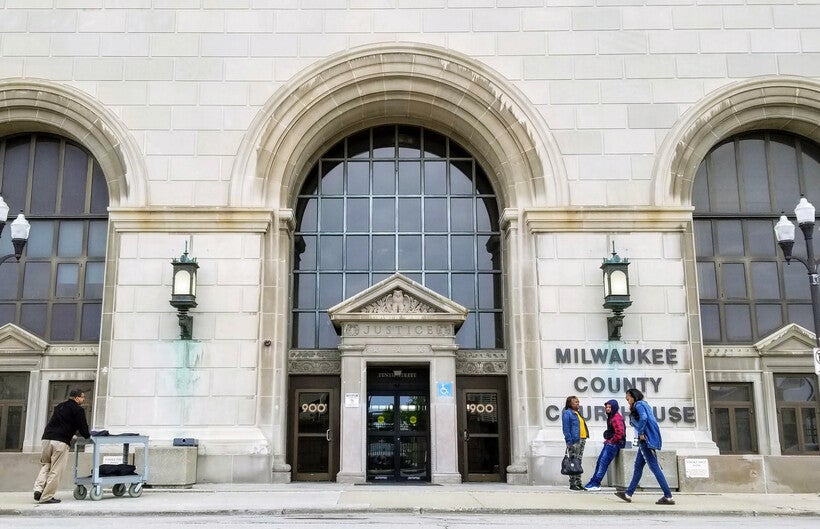 In this Tuesday, May 21, 2019 photo, people stand outside the Milwaukee County Courthouse in downtown Milwaukee. Kyla Calvert Mason/WPR

The costs associated with his second OWI offense were much higher than he expected they would be. His employer didn’t complete all of the steps necessary for him to be released for work during his sentence and he lost his job. He was able to find another position, but working only 15 to 20 hours a week and at a much lower wage.

"So his ability to pay his fine has come up," said Robert Gordon, his attorney. "I think it's appropriate to consider the amount because the court indicated he has a good job and can pay, but unfortunately he no longer has a good job."

Law enforcement agencies in Milwaukee County made 2,984 arrests for drunken driving alone in 2018, according to data from the Wisconsin Department of Justice. Cases like these are familiar to Borowski and his colleagues on the Milwaukee County Circuit Court.

"Of course, the problem is not just in Wisconsin, but in Milwaukee we have a serious, serious problem with drinking and driving," Borowski told one defendant as he considered her sentencing. "There’s rarely a day, if ever, that goes by where someone isn’t arrested and charged with driving while intoxicated ... the next thing that happens is that almost weekly or every other week, someone is killed due to reckless driving."

"There’s rarely a day, if ever, that goes by where someone isn’t arrested and charged with driving while intoxicated ... the next thing that happens is that almost weekly or every other week, someone is killed due to reckless driving," said Milwaukee County Judge David Borowski.

A 2013 report estimated excessive drinking cost Wisconsin and its residents $6.8 billion in 2012. That included costs like those racked up in court rooms, traffic stops, hospitals and treatments centers across the state as well as lost productivity on the job.

Scott, whose last name WPR is not using to protect his privacy, is a man who knows these costs well. He said he has been sober for five or six years with the support Alcoholic Anonymous. The financial toll drinking took on his life didn’t end with attorneys fees and fines for his four OWIs. But those costs were significant.

His attorney’s retainer fee was $5,000, the fine for his last OWI was $800 and he remembers the weekly fee during his sentence being $250. When he was on probation there was a $100 monthly fee and another $95 a month for the ignition interlock device he had to have installed in his car.

"I’m not complaining. I’m just saying you’re trying to run a household and everything else at the same time," he said.

Scott also remembers more mundane costs that might not make it into an estimate like the one put out in 2013.

"Being careless with your money, being reckless with your money," he said. Buying things he wouldn’t have without the "liquid courage" he said alcohol provided. "Like a rifle or something for hunting, you already got one, but you want another one — stuff like that. You want to impress other people as well as yourself."

The costs captured in the 2013 report have likely changed, too. Simply adjusting for inflation would bring the 2012 estimate up to $7.4 billion in 2018 dollars.

When it comes to the heavy drinking that fuels these costs, Wisconsin often tops other states.

America’s Health Rankings placed Wisconsin first in the nation in 2018 for excessive drinking based on data from the Centers for Disease Control and Prevention’s Behavioral Risk Factor Surveillance System.

And how the consequences of that drinking have changed since 2012 also impacts the price the state pays for its alcohol-infused culture.

Jeremy Bray heads the economics department at University of North Carolina at Greensboro and researches health economics. He said if early deaths have increased since 2012, that could drive up costs.

"One of the biggest costs in those social cost estimators is lost productivity and most of that is driven by premature death," Bray said. "So what you’re going to want to look at is changes in drunk driving fatalities, alcohol poisoning fatalities, say deaths from alcohol liver problems. I would focus on the first two."

If those trends continued, they would point to mounting costs for the state and its residents.

But there are other premature deaths linked indirectly to the state’s culture of drinking.

Heavy drinking is correlated with a higher risk of drug abuse, said Maggie Northrop, a public health fellow at DHS.

"One of the biggest costs in those social cost estimators is lost productivity and most of that is driven by premature death," Jeremy Bray of the University of North Carolina at Greensboro said.

The younger someone is when they start drinking, the more likely they are to wrestle with substance abuse later in life.

"I don’t think we can divorce this from the opioid epidemic," Bray said. "Alcohol exacerbates the issues with opioids. And I think while opioids have captured a lot of the popular attention now, and rightfully so, alcohol has sort of been that lurking giant that nobody is paying a lot of attention to that has been there and likely will be there still once the opioid epidemic is resolved."

Despite Wisconsin’s reputation for heavy drinking, comparisons with other states don’t put it at the top for costs.

In 2010, the CDC estimated the per capita costs of excessive alcohol use is Wisconsin came to $783, putting it 24th among states and Washington, D.C. for costs per resident. Data from the National Highway Traffic Safety Administration put Wisconsin 22nd among states, Washington, D.C. and Puerto Rico for the rate of fatal drunken driving crashes.

That Wisconsin can be in the middle of the pack for some costs and consequences of drinking while leading for consumption may have to do with context, Bray said.

The costs of medical treatment, fines and fees, or the projected future earnings of those who die prematurely, could be lower in Wisconsin than they are in other states. But where and when people drink matters, too.

Wisconsin isn’t known only as a place where a lot of drinking is done, but also as a place that produces alcohol, especially beer, that people drink all over the country.

A report from the Beer Institute and the National Beer Wholesalers Association put the economic impact of the beer industry at $9 billion in Wisconsin in 2018. That doesn’t account for the wine or liquor made, transported and sold in the state.

But Bray and others say Wisconsin doesn’t have to choose between a culture that celebrates brewing, distilling and winemaking and lowering the costs associated with excessive drinking.

There are some signs the state might be ready for a change.

"In Wisconsin, just turning the curve is a big success and making sure that we’re moving in the right direction is always seen as a big success," said Maggie Northrop, a public health fellow at the Wisconsin Department of Health Services.

More than half of the communities with health improvement plans across Wisconsin identified addressing excessive alcohol use as a priority, Northrop said.

And alcohol is one of six areas a current DHS campaign is focusing on to improve the health of Wisconsinites’ and their communities.

"In Wisconsin, just turning the curve is a big success and making sure that we’re moving in the right direction is always seen as a big success," Northrop said.

DHS is working to turn the curve by sharing proven policies and practices with local governments. Some of those include heightened enforcement of the legal drinking age and having law enforcement track the establishments where drunken drivers were served their last drink.

"It takes time for culture change. We’re looking at implementing what we call environmental strategies — so those are more policies at the community level. Changing the cultural norms and acceptance of alcohol," said Mary Raina Haralampopoulos, a prevention coordinator at DHS. "Things that the coalitions and health departments can implement that will be there and then make a healthy community for a longer time than a one-time program, or a one-time campaign." 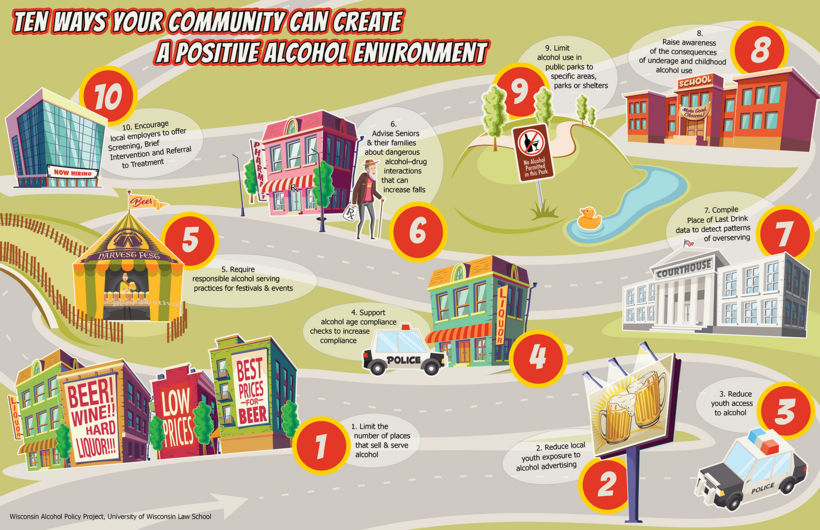 "That whole public health effort (to reduce smoking) really started in the early '70s and was multi-pronged," Bray said. "That’s one of the things that the alcohol public health people really need to pay attention to, and they are."

It begins with medical facilities screening patients and clients to assess their relationship with alcohol or other drugs — the kind of questions that would be familiar to anyone who has filled out a health history form before a doctor’s appointment. When patients report levels of drinking or drug use that could point to a problem, the medical provider has a short conversation about the risky behavior with the patient and how to address it. If the patient continues to engage in the risky behavior, they are assessed again and possibly referred to treatment.

It seems simple, but studies have found it effective in reducing alcohol and drug use. 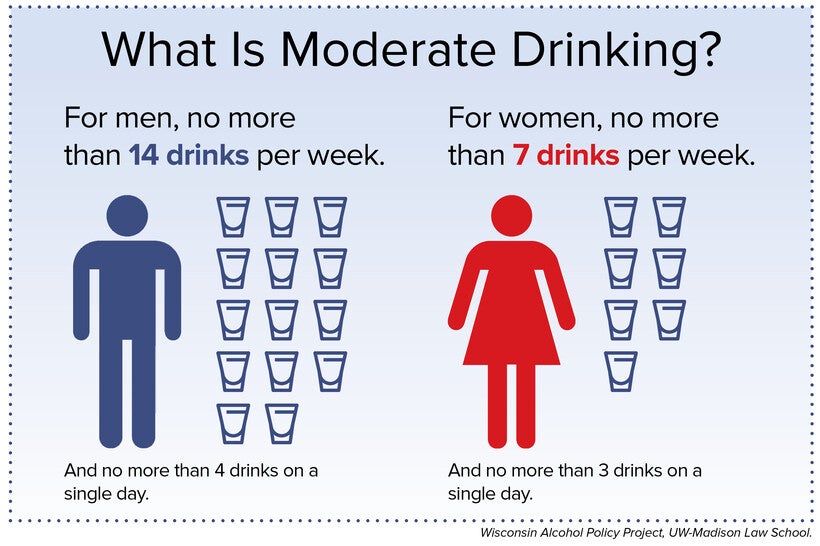 For Scott, moderate drinking isn’t possible — it's 100 percent sobriety — but he doesn’t advocate for abstinence for everyone.

Of all of the costs Scott associates with his drinking, he said what he and his health insurer had to pay for treatment was money well spent.

Now that he’s sober, his financial life is turning around. His last OWI was long enough ago that his driving record recently cleared, ending the roughly $1,200 a year he said he was paying in higher insurance premiums. But that’s just the latest bit of financial relief.

"Whether they’re big or small, when you have five or six things you eliminate, it’s a lot," Scott said. "All these schedules, these dates, it’s a lot. I can be a working civilian with responsibilities, pay taxes and just do the right thing."

Right now, for Scott, doing the right thing with his money includes giving to charity and helping his daughter pay for college.