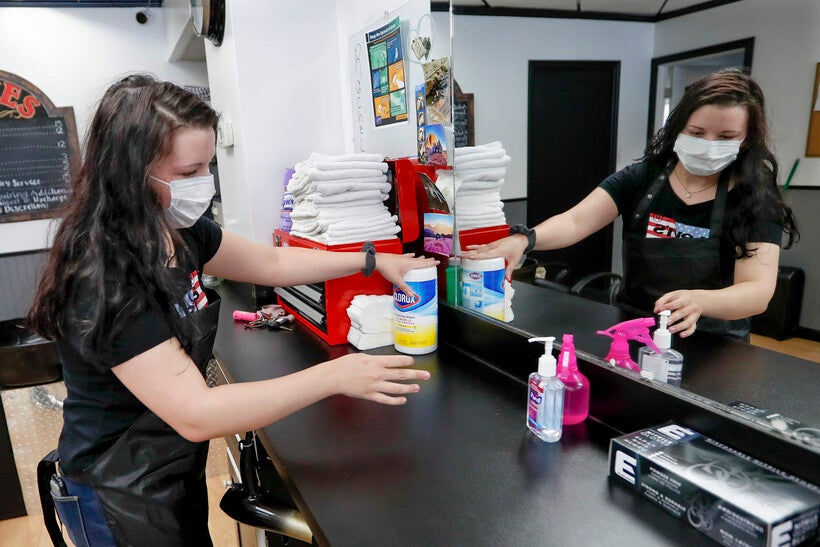 Stylist Kayla Addink arranges items in her workspace Thursday, June 4, 2020, as she prepares for her first day back on the job at the West View Barber Shop when most of southwest Pennsylvania loosens COVID-19 restrictions on Friday in West View, Pa. Keith Srakocic/AP Photo

There have been 21,593 positive cases of COVID-19 in Wisconsin as of Wednesday, according to the state Department of Health Services. That's an increase of 285 cases from the day before.

According to health officials, 671 people in Wisconsin have died from COVID-19 as of Wednesday afternoon.

DHS reported 357,112 total negative tests for the coronavirus, an increase of 9,902 from Tuesday to Wednesday.

As of Wednesday, 68 percent of people who have tested positive for COVID-19 have recovered, according to DHS. Three percent have died from the virus.

Wisconsin's daily testing capacity — based on the availability of test supplies and adequate staffing — has grown from 120 available lab tests in early March to 16,100 as of Wednesday. An increase in testing is one reason for the increase in the number of positive cases. The percentage of positive tests was 2.8 percent on Wednesday, up from 1.9 percent on Tuesday.

While DHS is recommending people continue to practice social distancing, protests have erupted across the state and nation calling for an end to police brutality and racial injustice. Protest organizers — including Freedom Inc. in Madison — have asked those attending the protests to get tested for COVID-19. And last Thursday, Centers for Disease Control and Prevention director Robert Redfield told lawmakers testing is especially important after protests in areas where there have been high transmission of the disease, like Minneapolis and Washington, D.C.