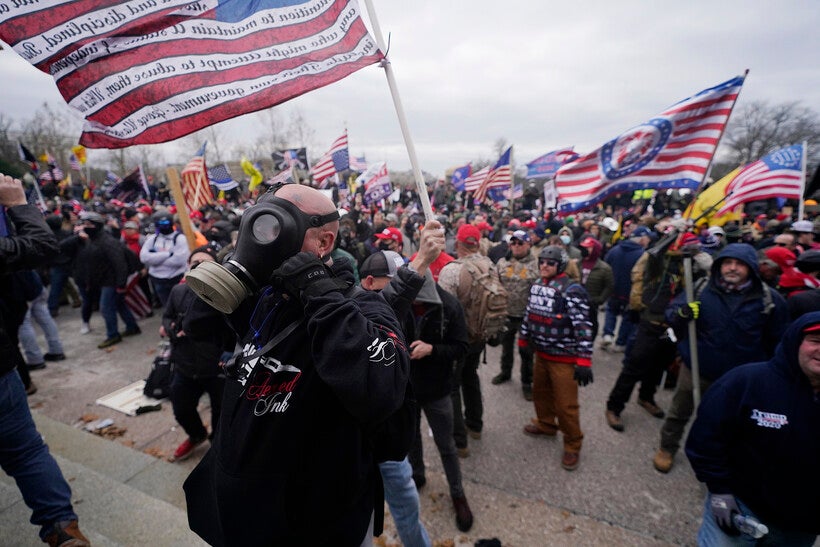 Trump supporters gather outside the Capitol, Wednesday, Jan. 6, 2021, in Washington. As Congress prepares to affirm President-elect Joe Biden's victory, thousands of people have gathered to show their support for President Donald Trump and his claims of election fraud. Julio Cortez/AP Photos

Violent supporters of President Donald Trump entered the U.S. Capitol, prompting the evacuation of the U.S. House and Senate chambers. Wisconsin politicians are speaking out against the violence Wednesday afternoon.

As NPR reported, U.S. Capitol Police have locked down all buildings within the U.S. Capitol complex Wednesday afternoon as a mob clashed with police.

People have been asked to shelter in place within the Capitol, citing a "security threat inside the building," according to NPR. Some reporters and members of Congress were evacuated from the chambers to undisclosed locations.

Pro-Trump extremists barreled through U.S. Capitol police outside and moved through the hallways of the Capitol, leading to staff being told to move inside offices, and hide and lock doors and windows, according to Twitter and NPR. At one point, Trump supporters made their way into House Speaker Nancy Pelosi's office.

The violence and blatant destruction of property coincided with the Electoral College vote certification for President-elect Joe Biden during a joint session of Congress. Trump and his allies have argued there was widespread voter fraud in November's presidential election. However, election officials have said they have found no evidence of widespread fraud.

Earlier in the day at a rally Trump told his supporters to go to the U.S. Capitol, he tweeted later that people should "stay peaceful" and "respect the Law and our great men and women in Blue."

He later posted a video on Twitter of him repeating claims that the election was "stolen" and "fraudulent," before asking the pro-Trump extremists to leave the U.S. Capitol complex.

In a speech Wednesday afternoon shortly before Trump shared his video, Biden said the actions Wednesday don't reflect the America he knows.

"Let me be very clear, the scenes of chaos at the Capitol do not reflect a true America, do not represent who we are. What we’re seeing are a small number of extremists dedicated to lawlessness. This is not dissent, this is disorder, it’s chaos, borders on sedition and it must end now," Biden said before calling on Trump to demand an end to the chaos. "I call on this mob to pull back and allow the work of democracy to go forward."

"I call on President Trump to go on national television now to fulfill his oath and defend the constitution and demand an end to this siege," Biden continued.

Here is a roundup of some Wisconsin politicians' statements on the violence that continues at the U.S. Capitol:

We are witnessing absolute banana republic crap in the United States Capitol right now. @realdonaldtrump, you need to call this off. pic.twitter.com/0QGx2PlXFY

In addition to blaming Trump, U.S. Rep. Mike Gallagher, R-Green Bay, also blamed members of Congress who were objecting to the counting of Electoral College votes in key states.

"This is banana republic crap that we're watching happen right now," Gallagher said in a video posted to Twitter. "This is the cost of countenancing an effort by Congress to overturn the election and telling thousands of people that there is a legitimate shot of overturning the election today, even though you know that is not true."

In an interview with CNN, Gallagher said he had not seen anything like this since he was deployed to Iraq.

"The president needs to call it off," Gallagher said before Trump released the Twitter video. "Call it off. It's over. The election's over. And the objectors need to stop meddling with the primal forces of our democracy here."

Gallagher repeated his criticism of objectors in Congress, saying they had treated Wednesday's session as though it were a "protest debate" without considering the consequences.

"There are serious consequences every time we break an unwritten rule, a norm, in this country," Gallagher said. "It is harder to repair than any statute or any statue. There are costs to what is happening right now."

U.S. Rep. Ron Kind, of La Crosse, spoke with reporters during an online press conference from his U.S. Capitol office, where he was taking shelter, Wednesday afternoon. During his remarks, Kind called the actions at the U.S. Capitol a "bloodless coup d'état."

He also accused Trump and some Republican members of Congress of fueling the violence with their rhetoric about the 2020 presidential election.

"I ask my colleagues, who for months now have spread lies about the integrity of the ballot box, unfounded accusations lacking any evidence or facts about voter fraud in this election, what did they expect the reaction to be?" he said.

Kind called on Trump to urge order and calm. He said he hopes members of Congress can return soon to the work of certifying the election results.

"Please, if you are in or around the Capitol, respect law enforcement and peacefully disperse," Johnson said in one tweet. "The Capitol Police have acted with incredible professionalism. I sincerely thank them for their service and condemn all lawless activity."

Johnson was one of the Republican senators who signed a formal objection to Arizona's Electoral College votes, which the Senate and House were debating separately when the Capitol was stormed. 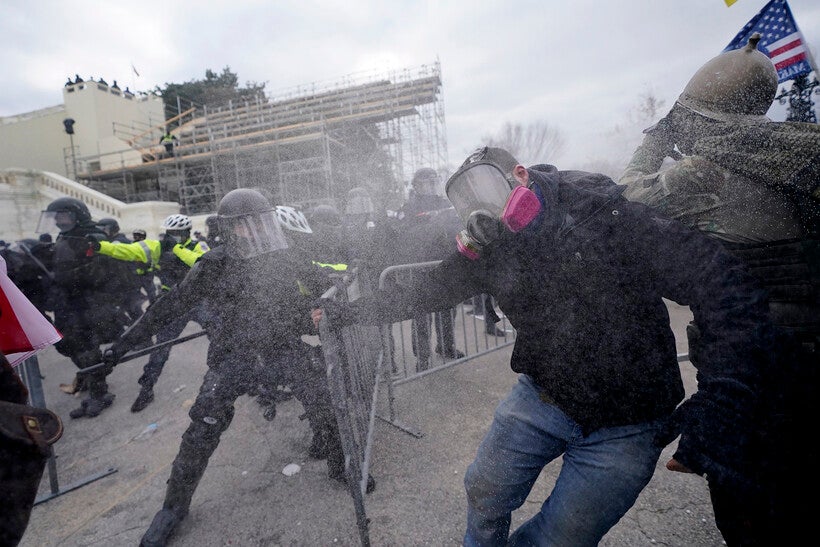 Trump supporters try to break through a police barrier, Wednesday, Jan. 6, 2021, at the Capitol in Washington. As Congress prepares to affirm President-elect Joe Biden's victory, thousands of people have gathered to show their support for President Donald Trump and his claims of election fraud. Julio Cortez/AP Photos

U.S. Rep. Gwen Moore, of Milwaukee, tweeted Wednesday that she was "safe and sheltered." She called the actions "shameful" and "encouraged" by Trump.

I am safe and sheltered but this is an incredibly disturbing and shameful moment for our country that was encouraged by the POTUS.

U.S. Sen. Tammy Baldwin tweeted Wednesday that she is safe after evacuating the U.S. Senate chambers. She attributed Wednesday's violence directly to Trump.

I am safe, but it's disgraceful that our country has to experience this violence because of Trump's lies, conspiracies and un-American attacks on our Democracy.

On Twitter, U.S. Rep. Mark Pocan called the violence and storming of the U.S. Capitol an "attempted coup" and said the violent actions were "domestic terrorism" "incited" by Trump.

Donald Trump needs to be presidential for once in his presidency. Admit you lost, and call off the domestic terrorism you’ve incited.

Republican U.S. Rep. Tom Tiffany said peaceful protesting is a constitutional right that "must be protected," but said violence is "unacceptable."

Peaceful protest is a constitutionally guaranteed right and that right must be protected for all Americans.

U.S. Rep. Bryan Steil, R-Janesville, tweeted a statement Wednesday afternoon calling the mob's actions "reprehensible." He called them "criminals." He also thanked law enforcement for their work and said anyone not authorized to be in the U.S. Capitol "needs to immediately leave."

In an interview with the Milwaukee Journal Sentinel, Grothmann said he thought Trump should exert more leadership by getting on TV and addressing the crowd.

Grothman initially told the newspaper that it looked "pretty serene" outside his office and that he was "not concerned at all."

He later noted that his office did not overlook the Capitol and called the Capitol mob "an embarrassment to our Republic."

Republican U.S. Rep. Scott Fitzgerald released a statement saying he was in the House chamber when the pro-Trump extremists entered the U.S. Capitol building and said he and his staff are "safe and secure," and called the actions "lawless."

"My thanks to law enforcement for their efforts to restore order and I strongly condemn the violence that was inflicted on the men and women of law enforcement doing their duty," the statement reads. "It is my hope that the House will soon resume debate on the electoral ballots in order to uphold our Constitutional responsibility. We should not be further delayed from addressing this serious issue due to today’s lawless acts."