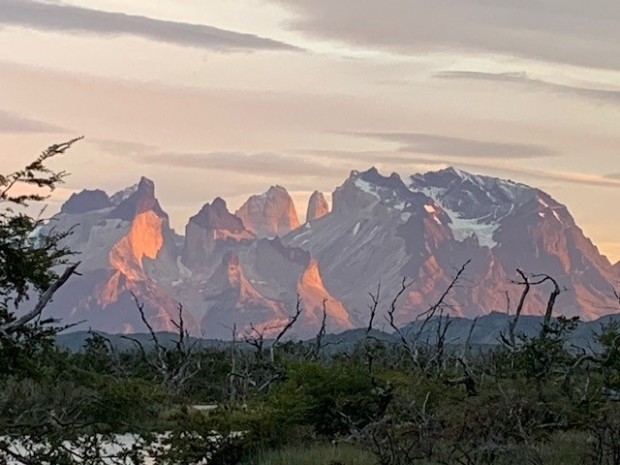 Torres del Paine, a national park in Chile, was shut down because of the coronavirus pandemic. A Janesville couple on vacation there abruptly cut their trip short and arrived home Monday, March 23, 2020. Photo courtesy of Jan Perrin and Jim Merrifield

While many Wisconsinites are contemplating what life will be like under a stay-at-home order announced Monday by Gov. Tony Evers, others are desperately trying to return home from other countries where borders are being closed and international flights canceled because of the COVID-19 pandemic.

Jim Merrifield and Jan Perrin, a married couple from Janesville, were in Chile for what was supposed to be a month-long vacation through Trek Travel to see rainforests, volcanoes and lakes. They abruptly ended their stay — cut short by more than a week — after Torres del Paine National Park closed down. The restaurants in Puerto Varas, where they were staying, were shuttered. Concerns were mounting they might not be able to get out of the country.

"Talking to some people at the hotel, one other couple remaining there was a German couple. They were having a very, very difficult time because normally, they'd fly into Italy, and other ways of getting home were basically closed to them," said Perrin.

"I was trying to remain hopeful. I tried to keep the apprehension at bay. That's also Jim’s attitude. But he really worked hard to get us out of there," she said.

On Thursday, the U.S. State Department issued a Level 4 Do Not Travel health advisory because of the pandemic.

"Our concern was not that we would get sick down there, but we wouldn't be able to get home," said Merrifield. "It actually would have been a nice place to shelter in place if Puerto Natales wasn’t completely shutting down."

Puerto Natales is one of the locations they stayed at. It's a port city in Chile's southern Patagonia and is a gateway to Torres del Paine National Park.

According to the Johns Hopkins Coronavirus Resource Center, there were only 746 confirmed cases of COVID-19 in Chile as of Monday morning, compared to over 41,000 in the United States. 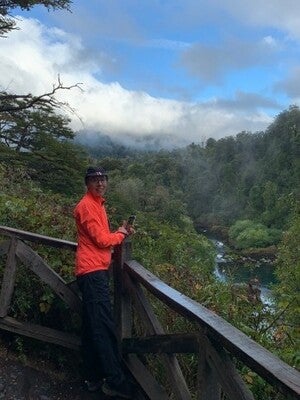 Jan Perrin visits a Chilean rainforest in this March 13, 2020 photo. The Janesville resident went to Chile with her husband, Jim Merrifield, for vacation which was cut short because of COVID-19. Photo courtesy of Jim Merrifield

On Monday morning, Merrifield and Perrin flew into Miami and were relieved to be home. The couple's age — both are 66 — and Perrin's asthma put them in a category that federal health official say could make them more vulnerable to becoming infected with COVID-19.

"It kept me on my toes," said Perrin, who saw her pulmonary doctor before leaving the U.S. and also took the steroid Prednisone to help her breathe while kayaking, biking and hiking.

They said the experience hasn’t dimmed their love for adventure, but like many others around the world, they don't know when or where they'll be able to travel next.

Several Wisconsin residents have contacted WPR's WHYsconsin with concerns about being able to travel home or being stranded around the world and in the U.S.

One of them was Wendy Petersson, whose daughter Josephine is a Peace Corps volunteer in the rural village of Islington in South Africa.

"We were trying hard not to worry," referring to her husband Mats and herself. "But until she came home, I guess we didn’t realize how really worried we were. You take a deep breath, and think, 'Trust the Peace Corps, they’ll make a decision, they’ll keep them safe,' but things happen beyond everyone’s control sometimes, so we are grateful she is back home."

"My office has been working to help bring Wisconsinites home from overseas, and we need the State Department to step up their efforts and offer more support. It is simply not enough to tell people to come home, they need help getting back home," said Baldwin in a statement.

Baldwin has written a letter to leaders of the State Department along with the Defense Department.

Johnson's staff said they have been assisting travelers located across more than 12 countries, including Peru, Honduras and Guatemala, since the pandemic started causing travel issues.