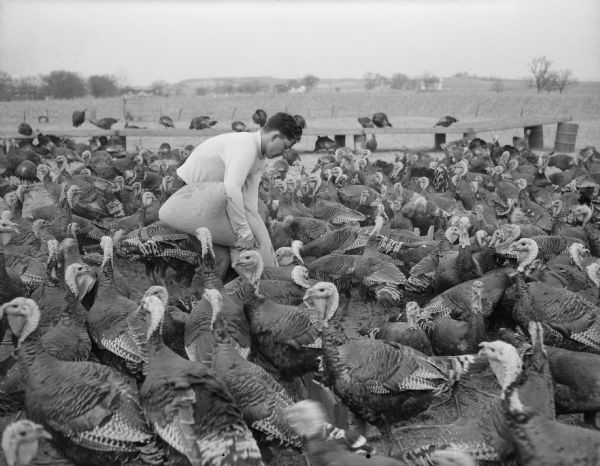 In the image above, Frank Lyons feeds his huge flock of domestic turkeys on his farm in Verona.

For most Americans, no Thanksgiving dinner is complete without a turkey. But the turkey most of us enjoy has little in common with the wild bird eaten by earlier generations.

Wild turkeys are a common site in Wisconsin today. But 50 years ago, Wisconsin had no wild turkeys. A loss of habitat, disease and hunting left the state without a wild wattle or native gobble.

Despite their misleading name, turkeys are native to North America. The bird got its name from European settlers who called the large birds "turkey fowl" or "forest turkey" for their similarity to guineafowl, a bird common in central Europe that had been imported to the continent via Turkey (in case you wondered, guineafowl are native to Africa).

Early settlers to Wisconsin encountered wild turkeys from Green Bay to Prairie du Chien. One woman was evidently so concerned about having turkeys that she brought four birds with her to Milwaukee from Buffalo in the 1830s. Mary Speilman Roller’s flock grew to be "a fine brood," famous around Milwaukee as "they stood for a real, old fashioned Thanksgiving dinner."

Turkey featured prominently on Wisconsin dinner plates in the mid-19th century. But heavy logging, the conversion of prairie and oak savanna to farming, diseases from domestic turkeys, and unregulated hunting led to a rapid decline in the state’s population, so much so that by 1860, turkeys were becoming rare. Wisconsin’s wild turkey population was entirely gone by the late 19th century (we still had domestic birds. What’s the difference? See here).

Several attempts were made to bring the wild turkey back to Wisconsin in the early 20th century but these were largely unsuccessful. Advances in understanding of turkey ecology, though, led to successful restocking efforts in the 1970s.

Today, wild turkeys can be found in every Wisconsin county.