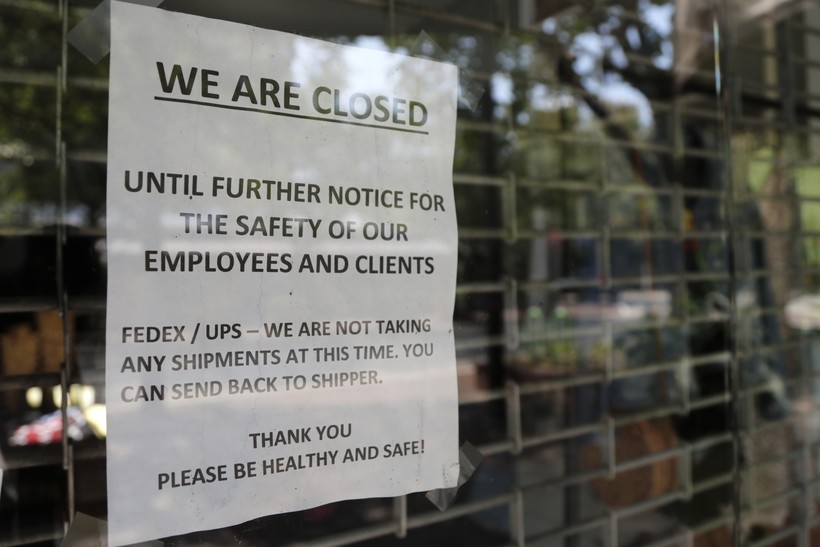 A sign posted at a retail store named Allie and Chica says the store is closed due to the new coronavirus pandemic, Thursday, April 9, 2020, in Miami. With a startling 6.6 million people seeking unemployment benefits last week, the United States has reached a grim landmark: More than one in 10 workers have lost their jobs in just the past three weeks to the coronavirus outbreak. Lynne Sladky/AP Photo

Wisconsinites' saw their income drop over the summer, marking the first time income has decreased statewide since the start of 2020, according to data from the U.S. Bureau of Economic Analysis (BEA).

Wisconsinites' personal income — including paychecks, rental income, and government assistance, among other sources — fell by an annual rate of 14.5 percent in the third quarter of 2020 to a combined $326 billion, down from about $339 billion in the second quarter.

The BEA reports personal income numbers as an annual rate, meaning if Wisconsinites' personal income continued to decrease at the pace seen between July and September through the end of the year, the income would have dropped by 14.5 percent.

The drop follows a dramatic 35.9 percent annual rate increase in Wisconsinites' income in the second quarter, driven by billions of dollars in aid from the federal government that was issued to Americans between April and June.

The steep drop-off seen in Wisconsin between July and September reflected the expiration of key parts of that federal aid, including a program that boosted unemployment benefits by $600 a week and stimulus checks of $1,200 or higher sent to many Americans. At that point, many businesses had also finished tapping money given to them under the federal Paycheck Protection Program (PPP), which awarded forgivable loans to help cover payroll costs and other expenses.

What followed was a months-long stretch many struggling businesses and out-of-work Wisconsinites endured with no additional help from Congress, leading many to pull back on spending for even basic necessities and bills.

But as Wisconsin families saw their income dropping, the state's economy appeared to be booming by different metrics. Over the same time period between July and September, Wisconsin's GDP rose 40 percent, according to BEA data, a dramatic spike.

Kishor said the explanation lies in the timing of that economic relief from Congress. Much of it made its way into Wisconsinites' bank accounts in the second quarter between April and June. But with Wisconsin's now-defunct stay-at-home order in effect for part of that time and general fear about being in public amid the pandemic, many Wisconsinites were not able to fully spend that aid until later in the summer.

In the latest round of federal coronavirus relief that was signed into law in late December, Congress restarted many of the major economic relief programs but in a pared down fashion, with a weekly unemployment supplement of $300 and a stimulus check that started at $600 for many Americans.

But even with new economic aid being sent out, many families relying on unemployment assistance and businesses counting on PPP funds have said that delays in the aid from Congress along with problems with how the aid is deployed have left them feeling like they can't count on government aid.

Kishor said that has a big effect on a household that's trying to plan and budget for the coming months. He added that it could also have some impact on the effectiveness of stimulus programs if recipients of the aid who don't know when they'll receive help again opt to save it instead of spending it.

It remains unclear when income data will reflect the full effect of the latest federal efforts to boost the economy. Stimulus payments have already started making their way into bank accounts, but the timeline for the $300 unemployment supplement is fuzzy, with state officials saying they hope to start sending payments out by mid-January. Officials also haven't been able to share any timeline for setting up two other crucial unemployment programs, leaving many Wisconsinites without unemployment aid entirely.