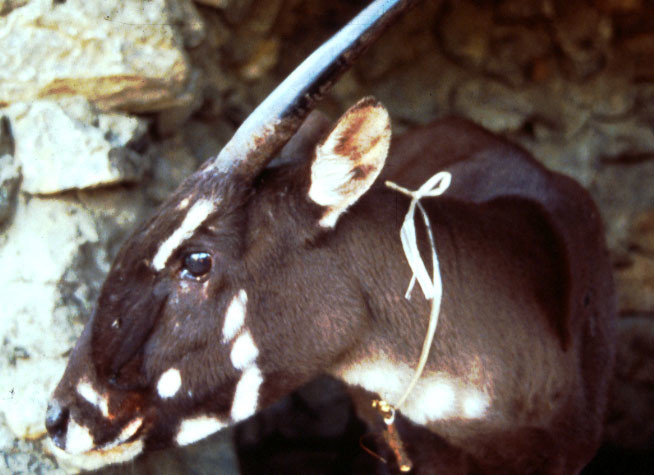 Wisconsinite Working To Save Endangered Saola In Southeast Asia

Mammal Was Discovered Less Than 25 Years Ago
By Jill Nadeau
Share:

Thousands of miles away from Wisconsin, in the mountains that border Laos and Vietnam in southeast Asia, a Wisconsin man is trying to save an endangered animal. Before 1992, most of the world didn't even know of its existence.

The animal is the saola, often called the "Asian unicorn." It's similar in appearance to the oryx, an antelope species first discovered in Africa.

"It has very long horns, sometimes more than 2 feet long and (a) beautiful pattern of white spots on the face," said Bill Robichaud, program coordinator for the Global Wildlife Conservation's Saola Conservation Program. "They are about the size of a white-tailed deer."

The saola, the cousin of cattle but with an appearance of an antelope, was discovered by a team of World Wildlife Federation researchers doing a survey of a remote area on the Annamese Mountains in north-central Vietnam, according to the World Wildlife Fund. The animal was known to local people but not the outside world.

"Even the Vietnamese biologist in Hanoi (the Vietnamese capital) didn't know about this animal," said Robichaud. "What was remarkable is that it wasn't just a new species but a new genus. To find an entirely new genus of a mammal in the world … is extraordinary for the closing years of the 20th century." A saola in the wild. Photo courtesy of Global Wildlife Conservation

The critically endangered animal had never been seen in the wild by biologists and there are few photos. Very little is known about the saola, said Robichaud, researchers don't even have a good idea of how many exist. Based on information from locals, there may be as many as 200 and as few as 10.

"It may be the most endangered large mammal in the world today," he said "Certainly it's in the top five."

Robichaud -- who now spends his time between Wisconsin, Laos and Vietnam -- is also working to help other rare species in the Annamese Mountains. They are threatened by the demand for animals for use in traditional east Asian medicine and bush meat restaurants.

"The issue is not local people hunting these animals for food," Robichaud said. "It's organized illegal commercial poaching gangs."

He said one of the techniques used to catch the animals is to set thousands of wire snares in the forests, some running for more than a mile. The snares catch everything, including the saola, an animal not wanted by poachers.

"They (snares) are only checked every few weeks, so the animal hangs by its leg in the snare in great stress and pain for a few days until it dies of stress and thirst," Robichaud said. "And often by the time the poacher checks his line, there isn't anything of value left to use, and the carcass is just thrown away."

Because the status of the animal is so precarious in the wild, biologists have decided it's necessary to establish a captive assurance population of saolas. Robichaud said it's hoped this will be established with in the year.

Locally, he is working with the Henry Vilas Zoo in Madison to raise money to help fund efforts to remove snares from the forests. The zoo's volunteers are repurposing the wire used in the snares into craft items, such as key chains and dream catchers. The items carry a charm with an image of the saola and have a tag that tells the story of the animal. The program is call Catching Hope.

"Me being a Wisconsinite, I'm very proud of what Henry Vilas Zoo is doing in the conservation effort," Robichaud said.