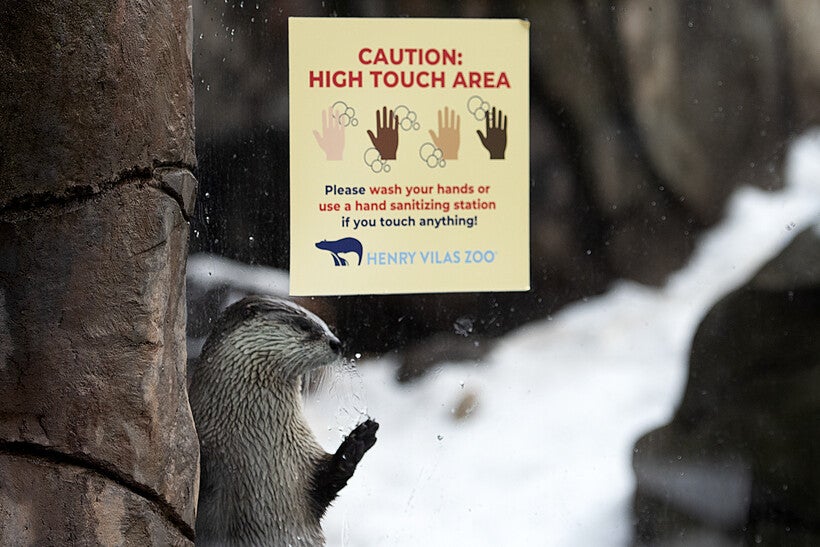 An otter touches the glass near a sign advising guests to wash their hands to reduce the spread of the coronavirus Friday, Jan. 15, 2021, at the Henry Vilas Zoo in Madison, Wis. Angela Major/WPR

Wisconsin’s state animal will soon be vaccinated against COVID-19.

Badgers at Henry Vilas Zoo in Madison are among the animals susceptible to the respiratory disease and will be inoculated with an experimental vaccine authorized by the U.S. Department of Agriculture.

The animal medical company Zoetis plans to donate more than 11,000 doses to zoos across the country, including in Madison and Milwaukee.

No COVID-19 infections have been found in animals at the Milwaukee County Zoo or Henry Vilas Zoo, but big cats at the Bronx Zoo became ill last April when the pandemic was raging in New York City.

The Centers for Disease Control and Prevention said its likely these and other zoo animals became sick after being exposed to a caretaker with COVID-19. In many situations, the agency said this happened despite the staff wearing personal protective equipment and following COVID-19 precautions.

"Our animals routinely get vaccinations. That’s something that our animal care team does for various diseases. Obviously with COVID-19 we were waiting until there was a vaccine that we could give them," said Milwaukee County Zoo spokesperson Jennifer Diliberti-Shea.

Local zoo directors anticipate they could receive the experimental vaccine by late July.

At the Henry Vilas Zoo, deputy director Joseph Darcangelo said the vaccine will be given to great apes, tigers and lions, and members of the mustelid family like otters, skunks and badgers. Milwaukee County Zoo will not include badgers in its initial round of vaccinations.

Zoos have taken great precautions to prevent COVID-19 from spreading from visitors to animals. At the Milwaukee County Zoo, Diliberti-Shea said an indoor exhibit with primates remains closed because the ventilation system used by animals is the same as it is for humans. At Henry Vilas Zoo all indoor exhibits remain closed except one where there is a separate ventilation system.