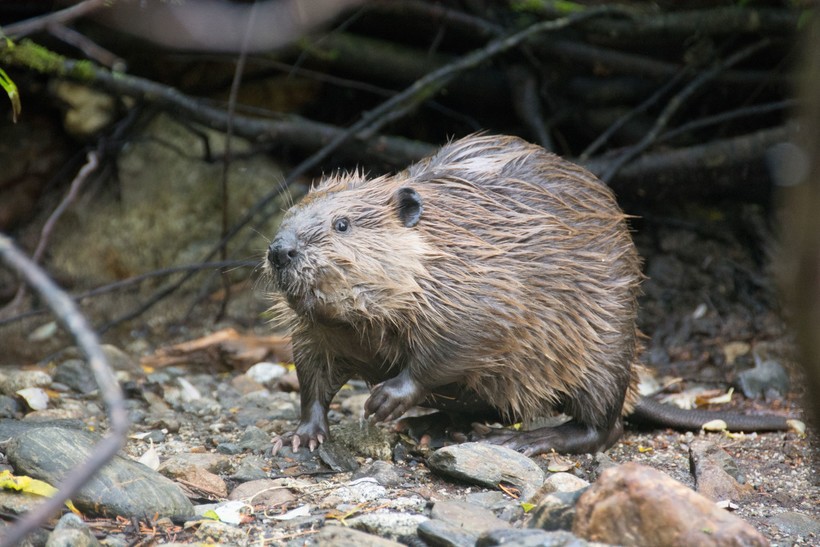 Wisconsin wildlife officials say controlling the state's beaver population is key to healthy trout streams. But some conservation advocates are pushing back.

Beavers are removed from habitat restoration project areas, especially on private land. Some advocates say letting the rodents remain is better for the waterways.
By Hope Kirwan
Share:

Wisconsin is home to more than 13,000 miles of trout streams. Every year, the state Department of Natural Resources works on habitat restoration projects to help trout populations thrive, both on public lands and on private property where the state has an easement to allow fishing access.

Wildlife officials say part of this work involves keeping another native species from undoing their efforts: the beaver. But some conservationists are pushing back on the idea that beavers are a threat to trout populations.

David Rowe is head of the DNR’s fisheries team in southwestern Wisconsin. He said beavers are a part of the native wildlife along these waterways, but the work his team does to create the ideal habitat for trout often attracts beavers to the area.

He said the rodents love the shrubby plants like willow and box elder that grow along the streams and the rocks used to stabilize the banks are an ideal foundation.

"It looks very attractive to a beaver to lock his dam in with a hard spot and his dam will persist longer. So the beavers you know that are going up and down these streams are like, 'Oh, wait a second. This is a great place now to build a dam now,'" Rowe said. "So we do make it more attractive for them."

He said a beaver building a dam can undo the DNR's habitat work on a stream, which is paid for through the $10 trout stamps purchased by Wisconsin anglers.

Along with preventing damage, Rowe said the primary reason DNR officials are removing beaver dams in his region is the flooding that can occur around the waterway. On public lands, he said the DNR often allows the dam to remain because recreational trappers help control the beaver population. But on private lands, Rowe said the DNR works with the U.S. Department of Agriculture’s Wildlife Services to trap beavers and remove their dams from the area.

He said the DNR mostly does beaver culling on a case-by-case basis, but officials do some surveillance for problems in areas that have seen repeated beaver damage.

Beaver culling happens across the state every year and is not limited to trout streams. A spokesperson from the USDA Wildlife Services said the agency depredated, or removed, 3,055 beavers across the state in 2021. Nearly half of all beavers killed in 2021 — 1,279 in total — were taken from trout streams. The agency also removes beavers on behalf of county highway and forestry departments, townships and from lakes with wild rice beds. The counties with the most beavers killed were in northern Wisconsin, including Douglas, Sawyer and Bayfield counties, which has the highest density of beavers in the state.

But as the state sees more frequent heavy rainfalls and resulting flooding due to climate change, some conservationists say the practice of culling beavers is harming trout streams and the surrounding area.

Bob Boucher studies beavers and how they affect hydrology and is the founder of Milwaukee Riverkeeper, an environmental advocacy group focused on the Milwaukee River basin. He said wildlife officials started culling beavers based on faulty science that beaver dams block fish migration and cause harmful warming of waters in trout streams.

"Actually what they do is they stabilize stream temperatures to be cooler in the summer and warmer in the winter," Boucher said. "When you stabilize the thermal climate stream, you also have more productivity from it because there's more bugs being grown."

He said those insects are key to helping trout populations thrive. So while fish may prefer to live in cooler sections of the water, they need the warmer parts for food.

Beyond trout populations, Boucher said beavers’ dams reconnect rivers and streams to their natural floodplain. In the last two decades, Wisconsin has seen a growing number of severe storms with heavy rainfall that led to flash floods, especially in northern and southwestern Wisconsin. Boucher said allowing beavers to make their dams on these waterways would help waterways better manage the influx of water and keep it from rushing through the system.

He said wildlife officials are also killing otters on these waterways because they continue to use lethal traps for beavers. The USDA Wild Services accidentally killed 146 otters last year as part of beaver removal efforts.

"They could go to non-lethal techniques by using flow devices and things like that," Boucher said. "The (state) Department of Natural Resources is really damaging the wildlife of Wisconsin and I would say the waters of the United States by doing this."

Rowe said the DNR recognizes the need for more research to better understand the actual impact of beaver dams on local trout populations.

He said the department has a research scientist currently working on this topic. He also said the DNR has worked to improve their habitat restoration process so that they don't accidentally attract beavers to an area that will later have to be removed. And he said the agency tries to reconnect trout streams to the natural floodplain in every habitat process because it has been shown to help the projects be more successful and long-lasting.