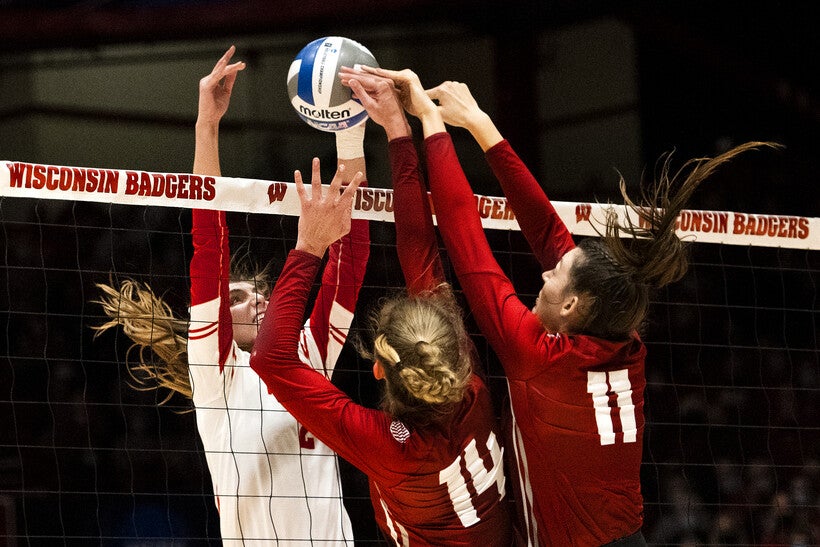 Wisconsin’s Sydney Hilley, left, competes with Colgate players at the net Friday, Dec. 3, during the Badgers’ NCAA tournament match against Colgate at the UW Fieldhouse in Madison, Wis. Angela Major/WPR

After numerous trips to the Final Four and beyond, this would be team's first national title
By Diane Bezucha
Share:

The No. 4 Wisconsin will take on No. 10 Nebraska, a team they have beaten twice this season. But the Badgers are still walking in ready for anything.

"Nebraska is a really, really great team. So, I'm really not surprised to see them again. Every single time we play them, it's a battle and it's extremely competitive. So it's gonna be a fun one, for sure," said graduate student and All-American setter Sydney Hilley at a press conference on Friday.

"There really is a genuine level of respect with that team. They play good hard volleyball and that's exactly the type of team we like to play. We like to play people who give us their best because we want to play the best. And we see that from Nebraska time in and time out. So I think, yeah, it's going to be an epic match," said Rettke at Friday's press conference.

"I mean, it's (Nebraska) the best defensive team and it's really tough to score. It puts a premium on us being patient," said Sheffield at Friday's press conference.

Nebraska has taken home five national titles over the years and Sheffield said envy can be a motivator.

"We want a white banner," said Sheffield on Friday. "We've been painfully close. And that's something that I think is driving everybody."

And the team is feeling pretty strong coming off their semi-finals victory against the previously undefeated and top-seeded Louisville on Thursday.

The hard-fought battle was a nailbiter through every set. The Badgers won the first and third sets while Louisville took sets two and four. So the teams battled it out through a grueling fifth set.

"I think last night was one of the most compelling matches you'll see," said Sheffield. "The dance of that match last night — the beginning of it was just two teams, highly, highly offensive at each other. And then the match evolved into unbelievable defense on both sides as both teams were kind of figuring out how to deal with the stress of it."

This deep into the tournament, Sheffield said the teams they are playing are the best and the Badgers can't always count on their offense. He said Louisville was quick to the ball and kept the Badgers on the defensive.

"We didn't win that match on our offense there in the fifth set. We won the fifth set off of our defense and against another team that is a special defensive team," said Sheffield at a post-game press conference on Thursday.

It didn't hurt that freshman middle blocker Anna Smrek had a knockout game with a season-high of 20 kills.

"As a team, we discussed coming into this match with confidence. And we were on the same page and everyone worked together from the pass to the set and just knowing that there was a lot of coverage behind us, and going up and (Coach) Kelly said, ‘Let's remember three words: let it rip.’ And I think everybody had that mentality and we fought," said Smrek at Thursday's press conference.

And even for fifth-year players like Rettke, this was a noteworthy game.

"That was absolutely one of the hardest, grittiest, most exciting matches of volleyball I've ever played. That was just fantastic volleyball. Both sides of that were making crazy digs, crazy swings. You can't ask for anything else in a semifinal match," said Rettke on Friday.

On Friday, Rettke was named the National Player of the Year, an award she credited to the strength of her entire team.

"We work so hard every single day and they really do make me look good. Let's be honest," said Rettke on Friday. "I'm thankful that award gets to be a part of our program because it just says so much and so I'm really pumped about that."

Thursday's win and Saturday's trip to the finals are all the more special for the team's oldest players. Rettke, along with Hilley and defensive specialists Lauren Barnes and Giorgia Civita, came back to play for an additional season as graduate students when the COVID-19 pandemic gave athletes an extra year of eligibility.

"I think most of all I was just happy that I get one more game with my best friends to get to ball out in one of the coolest environments ever and just keep balling out. And I think that's what hit me is I'm not done yet. So I was very excited," said Hilley on Friday.

The excitement of it all had Barnes on a complete high after Thursday’s game.

"Honestly, right now, I feel like I could run through a brick wall," said Barnes on Thursday. "This is why you came back, for moments like these."

And Saturday's final matchup in Columbus, Ohio, is sure to bring more excitement for players and fans alike.

"So many people showing up to support us here kind of fed our energy even from the bench, you know, they're contributing with each other and it honestly just lights everyone up," said Smrek at Thursday’s press conference.

On Thursday, the crowd in Columbus even included Badgers volleyball superfan Izzy Eaton, an 8-year-old girl with a rare gastrointestinal disorder who has been following the team for more than two years.

According to the players, Wisconsin and Nebraska have two of the most dedicated fan bases in college volleyball.

"That's pretty rare. To have fan bases like us and Nebraska. I mean, we both probably have two of the biggest facilities in the game and it's packed every night," said Rettke on Friday.

The last time Wisconsin and Nebraska played each other, it was the most-watched volleyball game in Big Ten Network history.

"And I wouldn't be surprised if tomorrow night is the most watched volleyball match in history," said Sheffield on Friday. "I think it's set up to be very compelling.”

The Badgers will take on Nebraska in Columbus on Saturday at 6:30 p.m. Central Time.