The leader of Wisconsin's Department of Workforce Development said Monday there's been "fantastic progress" in its efforts to modernize the state's unemployment insurance system.

Secretary-designee Amy Pechacek, in an appearance on Wisconsin Public Radio's "The Morning Show," said the department is paying 84 percent of unemployment claims within one to three days.

The department announced in September it was entering a $16.5 million contract with Flexion, a Madison-based software development company, to update the department's decades-old computer systems and technology.

Pechacek said the department has no intention of ending that partnership.

"We're going to continue to deliver on these great customer service improvements," she said.

"We are proud of that," Pechacek said.

DWD struggled in the early months of the COVID-19 pandemic. The economic shutdown of March 2020 and the influx of claims that resulted placed a strain on the unemployment system, creating a backlog of hundreds of thousands of claims. Some potential applicants weren't able to connect to the department's call center to complete the process.

As of June 2020, unemployment applicants waited 19 days on average for their claims to be paid, according to DWD data. Some applicants reported much longer waits, however.

Implementing federal pandemic unemployment programs created another hurdle for the department. According to a Legislative Audit Bureau report, technology errors led DWD to overpay millions of dollars in unemployment benefits in April 2020.

Ultimately, Gov. Tony Evers fired then-Secretary Caleb Frostman in September 2020, when the department was still processing more than 700,000 claims made since the pandemic's onset.

Pechacek highlighted the department's progress under her watch.

"We have inherited a system that is over 50 years old," Pechacek said. "When I walked in the door, I was surprised to learn that when folks had to send in documentation to support their unemployment claim, they had to either fax it or mail it."

Since then, the department has made changes so applicants can upload those documents online.

"We've got artificial intelligence on the backend that pulls that data right off, so it's very efficient," Pechacek said.

According to the most recent department statistics, 91 percent of initial applications for unemployment benefits have been filed online. That number jumps to 95 percent for weekly claims.

Pechacek said the department increased project appointment and contractor hiring during the pandemic, especially in adding judges to address claim appeals. According to department data, more than 700 appeals were waiting to be scheduled as of the end of April. That's down from almost 13,000 appeals a year ago.

DWD's staffing levels are still above where they were before the pandemic, Pechacek said.

"I think we've adjusted to what is an appropriate staff level going forward to continue to provide excellent and timely customer service, but we don't need the high high levels of folks that we needed at the time of the pandemic," Pechacek said.

Pechacek said bringing on project appointments has given the department the chance to plan ahead.

"We have permanent regular judges that had, you know, planned on retiring," Pechacek said. "These project positions give us a pool of well-trained and sort of vetted employees that we can then seek to fill any vacancies if we encounter them going forward."

Pechacek said though the modernization process is still expected to take years, the department is continuing to move forward module by module.

"This is a large project," Pechacek said. "It's a marathon, it's not a sprint." 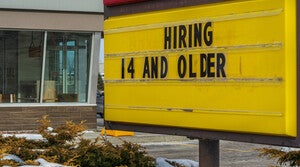 Last month, Wisconsin’s unemployment rate dropped to a record low 2.8 percent. We check in with the head of the Department of Workforce Development about improvements to the state’s unemployment system and how the record low unemployment impacts the workforce statewide.