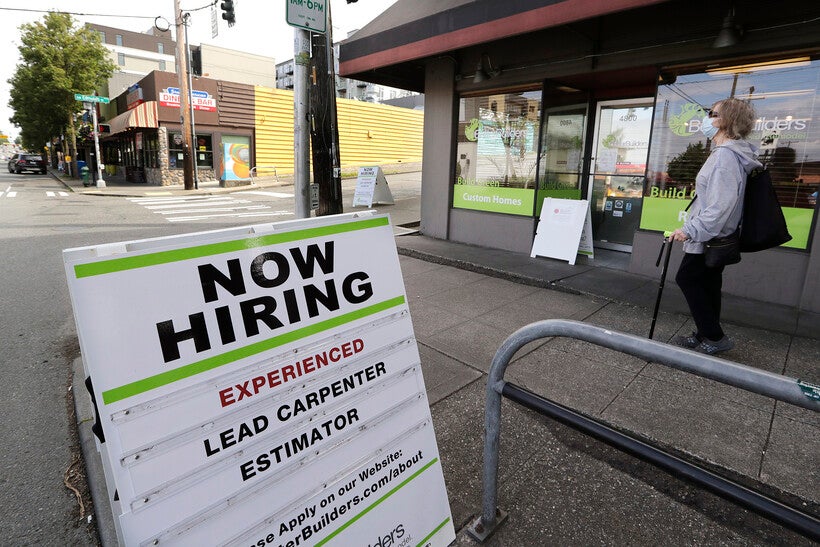 In this photo taken Thursday, June 4, 2020, a pedestrian wearing a mask walks past reader board advertising a job opening for a remodeling company, in Seattle. Elaine Thompson/AP Photo

State Still Hasn't Recovered Nearly A Third Of Jobs Lost At Height Of Layoffs In April 2020
By Rachael Vasquez
Share:

Wisconsin's unemployment rate fell to 3.8 percent in January, according to data compiled by the U.S. Bureau of Labor Statistics and released Thursday by the state Department of Workforce Development (DWD).

That's an improvement from December, when the state had a revised unemployment rate of 4 percent.

"The economic impact of the COVID-19 pandemic has challenged workers and businesses across Wisconsin and the nation," said DWD Secretary-designee Amy Pechacek in a statement Thursday. "Our unemployment rate in January was 3.8 percent, approaching pre-pandemic levels, and that should be celebrated. However, we also know the impact of this pandemic is not over."

The state's unemployment rate remained better than the U.S. as a whole in January, which was 6.3 percent.

James Murray, professor of economics at the University of Wisconsin-La Crosse, cautioned that although the state's overall unemployment rate is improving, sectors like leisure and hospitality are still experiencing an unemployment rate close to what Wisconsin saw at the peak of pandemic-fueled layoffs last spring.

"We're nothing near pre-pandemic levels," Murray said. "We've made tremendous recovery so far from the height of this recession, but we're not yet back to those pre-pandemic levels. And that's where I see the next phase of the economic recovery."

Wisconsin added a total of 11,100 jobs in January, according to the latest data. But the state still has tens of thousands of jobs to make up before it returns to pre-pandemic levels of employment.

At the height of layoffs in April, Wisconsin lost nearly 440,000 jobs, a massive number that's bigger than the population of the state's second and third largest cities — Madison and Green Bay, respectively — combined. With January's employment data, nearly one-third of those jobs still have not come back.

Menzie Chinn, professor of public affairs and economics at UW-Madison, said he expects the federal stimulus signed into law Thursday will help boost unemployment some, as Wisconsinites start to spend that money in the economy. But Chinn also notes that many residents in the state took large hits to their finances last year, and may not be able to spend that money as freely, potentially limiting some positive economic effects the stimulus money could have had.

Because the unemployment rate is reported with a months-long delay or longer, economists and policymakers often look to the number of new applications for jobless benefits as a more current indicator of the health of the economy.

Nationally, 712,000 new applications for unemployment benefits were filed last week, a drop of 42,000 from the week prior that sparked optimism Thursday about the country's recovery.

In Wisconsin, more than 12,000 new unemployment claims were filed last week, a drop of approximately 1,100 claims from the week prior.