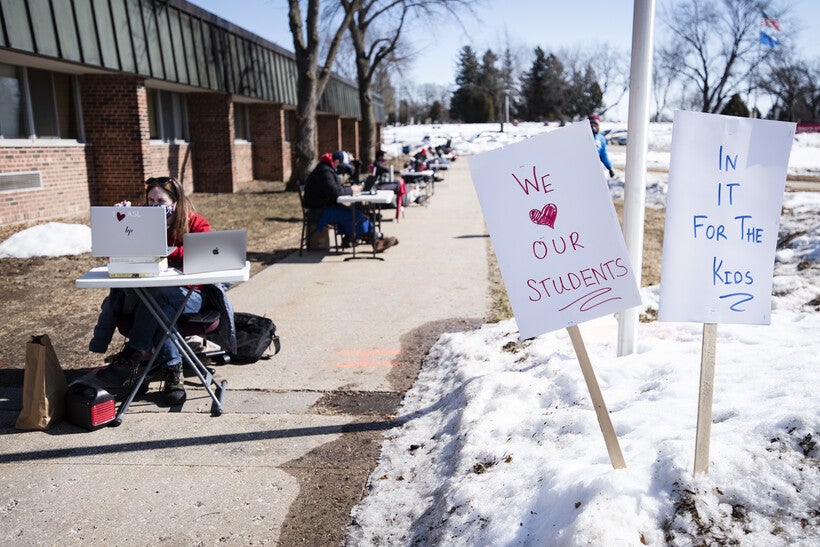 Wisconsin Teachers Were Vaccine Eligible Starting March 1, But Rollout Has Been Uneven

Some Teachers Got Shots Months Ago, While Others Are Still Waiting
By Madeline Fox
Share:

He'd heard that Walgreens was scheduling appointments a few days in advance, so he signed up before March 1 to get his shot on Monday afternoon.

Olson, normally not a fan of needles, said he couldn't wait to get this shot. A few days later, he said he cleared it without any noticeable side effects besides a sore arm.

Other Madison Metropolitan School District teachers have had a little more trouble getting a vaccine. An initial plan for teachers and child care workers in Dane County to get their shots at vaccine clinics at the Alliant Energy Center have been delayed for an expected two weeks because of shortages in vaccine supply. 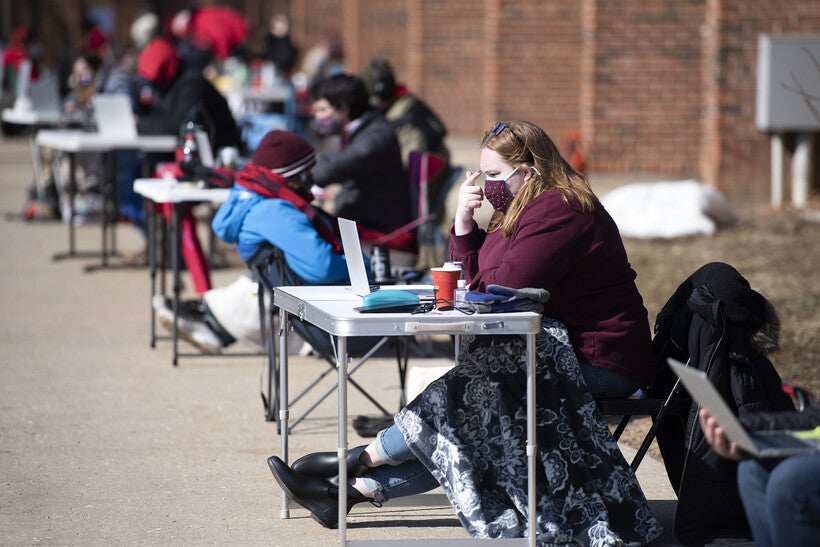 A teacher teaches virtually from outside La Follette High School on Thursday, March 4, 2021, in Madison, Wis. Teachers from the high school held the outdoor demonstration to raise concerns about lack of access to COVID-19 vaccines. Angela Major/WPR

On Thursday, teachers at La Follette High School taught virtually from outside their school building to protest a return to school before they've gotten through the vaccine sequence.

Kate Schultz, a 10th grade English teacher at the school who helped organize the event, said she's worried about the way reopening plans are proceeding with so many teacher vaccinations pushed back.

"We feel as though staff who have been in person already and those who are returning now at elementary level should have priority in the vaccine, instead of it sort of being a free-for-all now that they're trying to push this timeline forward for returning to schools," she said.

Some grades have already begun returning to classrooms in Madison, though the oldest grades aren't expected to return until mid-April. 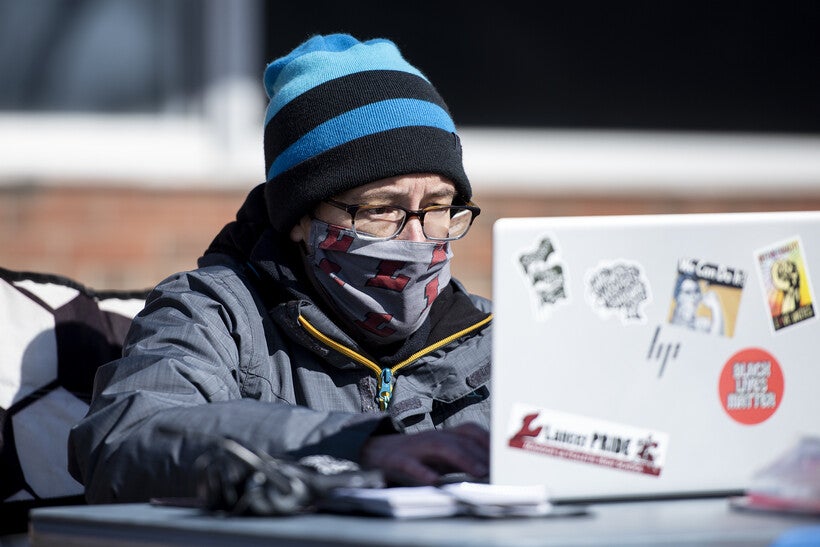 Kate Schultz, an English teacher at La Follette High School, speaks to students virtually outside of the school building Thursday, March 4, 2021, in Madison, Wis. The purpose of this outdoor demonstration was to raise concerns about starting in-person instruction without getting vaccinated for COVID-19. Angela Major/WPR

"As teachers, we serve our community, and for us as community members, it's really important to not be in a position where we could be transmitting a deadly virus to our students who would then bring it home to family members, and be responsible for a spring surge," said Schultz.

Milwaukee Teachers Start Getting Their Shots

Vaccination was a family affair for elementary school teacher Josh Jackson. He and his wife are both teachers with Milwaukee Public Schools, so they scheduled consecutive appointments and brought their 11-month-old daughter, Ruby, along to the Wisconsin Center in downtown Milwaukee on Wednesday morning.

MPS hasn't confirmed an exact timeline to bring all of its students back, but it's expected to be around mid- to late April, which means Jackson should be a few weeks past his scheduled second dose by the time he's back with students in person.

Another MPS teacher, Michelle Young, got her first dose on Tuesday. The clinic was running about 10 minutes behind when she arrived — she got processed for her 1:10 p.m. appointment at 1:20 — but she said things moved quickly and efficiently after that. A nurse asked her a few questions to confirm she was OK to get the vaccine, and then administered it. 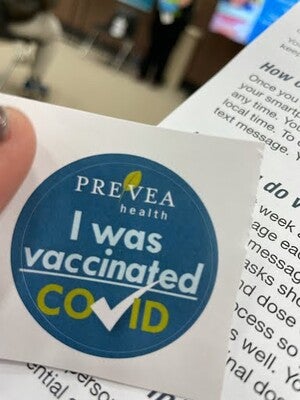 "I'm one of those who has to turn my head because it makes it a lot easier," she said.

Young, who teaches middle school science at the Golda Meir School, said she didn't have any concerns about the COVID-19 vaccines. Her mother won't get hers because of misgivings about the medical system, she said, but for Young, it's a much safer bet than potentially getting COVID-19 or passing the virus on to others.

"How do you teach science and not trust it?" she said. "I look at it as, technology is advancing, so they should be able to expedite things like the vaccine."

Other teachers leaned on their school expertise, as well. Teaching civics and government means Olson, the Memorial High School teacher, knows a lot about the ins and outs of federal bureaucracy. He said that made him more confident in the vaccines that had gone through the Food and Drug Administration's approval process and were recommended by the Centers for Disease Control and Prevention.

For Some Teachers, The Vaccine Came Early

Some teachers started their vaccine sequence before March 1. Teachers over age 65 around the state qualified earlier, while at the local level, some districts worked with their local hospitals or health services to set up vaccination days.

Teachers in Janesville finished their vaccine sequence in February, after the Janesville School District worked with local hospital system Mercy Health to distribute extra doses from Mercy's allocation for groups that were eligible earlier.

Melissa Baier de Garcia, a Spanish teacher at Janesville's Craig High School, said she was surprised to get her vaccine so early. Her district has been teaching students at least partially in person since last fall, and her classes are currently split into two cohorts that each come in two days a week in order to keep class sizes small enough to social distance.

"I think there was a little bit more of an urgency with us, since we are face-to-face, and we are one of the largest employers in the city," she said. Her process was quick and efficient, she said, with a lot of the paperwork done in advance and a whole area dedicated to getting teachers their shots on Jan. 22 — the district had canceled classes for the day, and teachers could go for their shots between 6 a.m. and 7 p.m. Her second shot, a month later, was a similar process.

"Just the other day, my students are writing an essay in class, and I was able to go around reading their rough drafts, and I could look at their work, and give them some feedback, and it just felt good that I could be close to my students again," she said. "I'm not as fearful to walk around the classroom."

Breanne Kanak, an art teacher in southeast Wisconsin's Wabeno school district, also got her first shot in February. Her district worked with the Forest County Potawatomi Community Health Department to prioritize teachers. Kanak, who travels among different buildings teaching across different grades, said teachers hadn't heard in advance, so many had signed up with the county to be notified of vaccine availability.

"We got an email (from our superintendent) the day they were in our building that said, 'Great news, everyone, we have vaccines, hot damn!,'" she said, paraphrasing.

She got her shot during the last period of the day while another teacher watched her sixth-graders, heading to the building's auditorium where three Forest County Potawatomi clinic nurses were waiting with their paperwork and the shots. The next dose is scheduled for after school on March 11.

Sarah Pamperin, a Green Bay Area Public Schools teacher who works with English-language learners, wasn't sure she'd be eligible for the vaccine because she's already had COVID-19, but she received her first shot March 1. She said the district let teachers know around 3 p.m. that they would be able to sign up for the vaccine, with slots to open up at 5:30 p.m. that evening.

"I got home and my spouse and I were logged into all the devices we have — which is three — to sign up," she said. "My husband was the one that was able to actually get me a slot, and it was during one of my classes, so I got a teacher to cover my class while I was out getting the vaccine."

Pamperin said she wanted to call into her students' class virtually to tell them about the vaccination experience, but the site — an area attached to the University of Wisconsin-Green Bay's Kress Events Center — had signs posted saying, "No photo or video." However, she said, in the waiting area for people who had gotten their shots, there were big TVs that read, "Thank you, educators. Congratulations on your first vaccine!"

"I was just kind of overwhelmed with happy tears," she said. "It feels surreal."