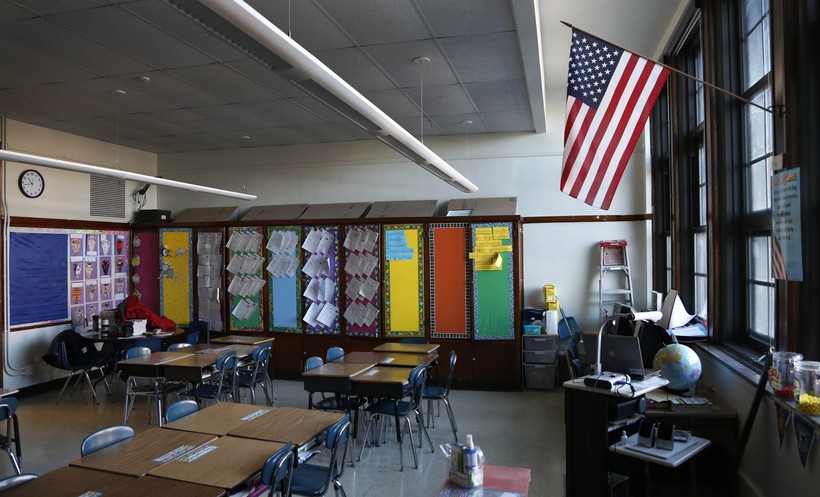 Milwaukee Public Schools Will Bring Some Students Back Starting Next Week

About 300 Students With Special Needs Will Start Feb. 8, With Plans For Remaining Students To Return In April
By Madeline Fox
Share:

The state's largest school district will start bringing students back into classrooms next week.

The move comes in response to a Department of Public Instruction letter sent to Milwaukee Public Schools saying that it had to bring students with Individualized Education Plans (IEPs) who require in-person help back into classrooms by early February, or the state would withhold some of its special education funding.

"While most students are able to receive (a free and accessible public education) effectively through distance learning options, some other students with disabilities are not," state Superintendent Carolyn Stanford Taylor wrote in a letter to MPS Superintendent Keith Posley in October, when the state agency first urged MPS to teach some special needs students in person. "These students simply are not able to make the required progress solely through distance learning. Consequently, some students with disabilities require in-person instruction and/or related services."

MPS plans to bring around 300 students with IEPs back into three of its school buildings by Feb. 8. The district is contacting the families of students in that group this week.

"I understand the need of our special needs students and their education, and that it is definitely challenging for our parents," said Sequanna Taylor, an MPS School Board member. "I just see that Feb. 8 date as something that was backing us into a corner by DPI, with the threat of taking $13 million from us in a district that was already struggling."

The school board also approved a phased reopening plan for its remaining students that would have them return in April, though the board will meet again in March to reassess that timeline in consideration of COVID-19 vaccination and community infection rates. Families will be able to opt their students out of in-person learning and continue with a virtual option if they have concerns about sending their children back into school buildings.

MPS parent Jenni Hofschulte, who works with Parents for Public Schools Milwaukee, said she's not likely to send her fifth-grade son back in person even if Milwaukee does move forward with its April plan.

"I just think that there's so much about COVID that we don't know about for the long haul," she said. "And other districts have newer buildings, with better HVAC systems, and if teachers do start to get sick, we already have very large class sizes — I don't feel like we're built for that."

She is worried, though, that if the majority of kids go back, the virtual learning might not be as robust, especially if teachers end up live-streaming their in-person lessons instead of holding the same kinds of group-check-ins, breakout discussions and other virtual-first lessons they've been doing so far this year.

Hofschulte said the majority of families she heard from after the board vote were uneasy about sending their kids back to school, and wanted to make sure there would still be a virtual option. 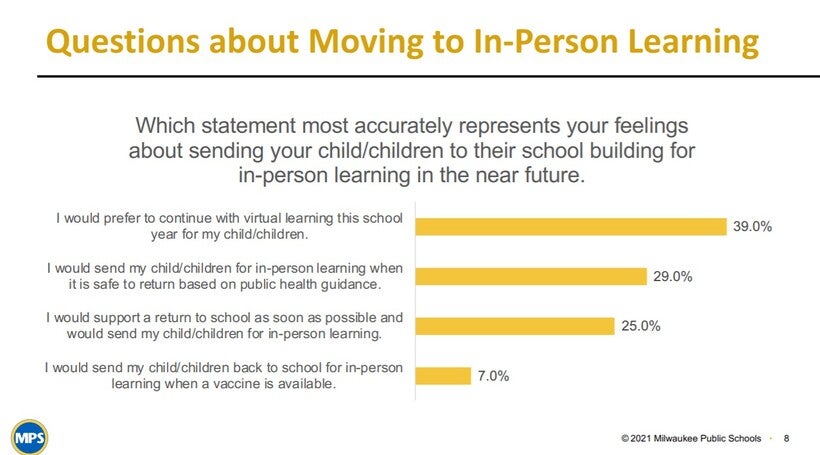 A survey of MPS families as of Jan. 25 showed a plurality of families who responded wanted to continue with virtual learning, while others would send their kids back, depending on the circumstances.

"After the board meeting, I bet I got 75 percent of contacts from people that were scared that they were going to be forced to go back to school in April, than the 25 percent of people who said, 'April is not soon enough,'" she said. "People are living through some extremely dire times right now, but also, we are in the middle of a pandemic."

Still, many of the parents who testified at a Jan. 26 board meeting called for an in-person return.

Many of the school districts surrounding MPS have been teaching students at least partially in-person since last year, while others recently voted to start bringing students back into their buildings. Other districts that, like MPS, began the school year learning virtually are making plans to reopen, especially with teachers in the next group eligible for vaccines. In January, Milwaukee Mayor Tom Barrett said he wanted to see a reopening timeline for MPS so the city could plan for teachers' vaccinations.

The achievement gap came up repeatedly during parent testimony at the January board meeting. Wisconsin has the widest achievement gap between Black and white students, according to the 2019 National Association of Education Progress "report card."

MPS Board member Megan O'Halloran encouraged parents to think about the gap beyond conversations about reopening, and to join this week's Black Lives Matter Week of Action to learn more about the issue.